Hello everyone. Let me just start by apologising for my absence over the last few weeks. I’ve been very busy, and have had to take a break from the blogging game. Bless you if you’ve missed me. If not, well I expected as much. Either way, this week I’m back to enrich your life with a new post, and it’s all about a mysterious spirit called Wall Street that I picked up this summer. Enjoy… 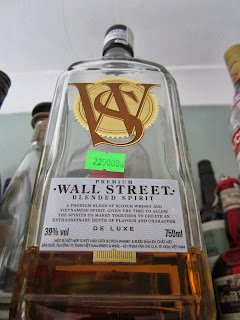 To facilitate giving you my impressions of Wall Street, I’d best start with a brief rundown of what for me are the essential facets of booze tourism; the two aims, if you will.

First, in alignment with the basic point of all kinds of tourism, is the pursuit of new experiences. For the booze tourist that could mean drinking in local bars, trying the local brew, doing a tasting tour, visiting a distillery – even going on a booze cruise or ending up in hospital after drunkenly diving into a fountain in Ibiza and hitting your head… basically it’s anything alcohol related that pertains to the place you’re visiting.

This second aim can be broken into 3 parts:

Ideally this is some local oddity, such as the longan wine I picked up in Vietnam or the aguardiente de orujo and hierbas ibicencas that I collected in Ibiza. It could just be some malt liquor that simply doesn’t have a distributor in the UK market.  The basic thing is that you’re trying to get something that you couldn’t’ve picked up at your local supermarket, and ideally that you couldn’t get without going to the country you went to.

Let’s face it, some liquors are particularly expensive but when you go on holiday they can turn out to be incredibly cheap. The basic idea here is, if you’re going to Italy, get some grappa. If you’re going to any of the Caribbean countries, you might want to think about getting some rum. You get the idea. We’ve covered this before.

It’s not just an issue of getting a litre of something for the price you’d normally pay for 70cl. No, some things are only available in Duty Free. As a booze tourist, you need to find out what these things are and look for them. This brings its own problems; how good is the duty free at the particular airport you’re returning home from? You aren’t going to know until it’s already time to come home and too late to buy elsewhere. So don’t rely on Duty Free for all your alcohol purchases, and definitely make sure you pick up your local stuff beforehand. You never know what they’re going to have in, and the local stuff is probably going to be cheap enough in general anyway. Thinking about this just now has made me realise I should start a Duty Free airport guide, so look out for that sometime in the future…

So! Back to my bottle of Wall Street. You might remember from an earlier post that I picked this up in Vietnam. It appears to be distributed by Diageo, going off the label on the cap, and it’s a blend of scotch and ‘Vietnamese spirit’, clocking in at 39% ABV - so below the minimum level required by the Scotch Whisky Association to be classed as ‘genuine whisky’. It doesn’t claim to be whisky anywhere on the packaging, and it has listed as its ingredients, ‘scotch’ and ‘caramel’. What that does make it, I’m not sure. I do know that caramel is often used as a colourant in whisky production, so it could just be that. For a bit more science on caramel spirit, you can visit dramming.com, where it actually says that the Talisker 10 and Lagavulin 16 are examples of scotch that use caramel for adding colour. Both of those have managed to maintain ABV levels of over 40% though, so they are allowed to be called whisky.

As is the case with most brands of alcoholic beverage, there are more questions concerning this one than answers like:
What is Diageo’s involvement, and why are they too ashamed to list it on their website?
What has Wall Street got to do with either scotch or Vietnamese spirit?

I haven’t found any answers to those, so let’s just crack on with some comments.

I haven’t seen this anywhere else, and a search of the internet yielded a solitary picture of a bottle among someone’s holiday snaps from Vietnam, so in terms of procurement of items you can’t find anywhere else: mission accomplished.

The only problem of course, with buying random stuff that you can’t get at home is that it might not be any good. It might not even be made for your western palate. I had no idea what it was actually going to be like. Mrs Cake asked the lady in the shop if she had any idea, and she said she didn’t drink but her husband was very fond of it. Sadly, that information didn’t prove all that useful to me – not just because I don’t know him, but also because… he’s probably Vietnamese, which means he has different terms of reference to me as far as taste goes. You know; presumably Chinese people like Baiju, but I’d be surprised if you found many people in the UK who’d go back for a second glass.

My impressions then, of this Wall Street stuff is that in spite of its intriguing appearance and mystique, it’s fairly characterless. It sure is colourful – that’s probably the brightest amber I’ve ever seen in a spirit.

I’m getting nothing on the nose and very little on the palate. I’m not very good at this whole tasting lark anyway, but usually I can at least find a spirit tasty or interesting or enjoyable. After an initial hit of sweetness, this one is a bit like drinking fluff off the carpet. I just didn’t know now how I was going to get rid of it. I tried it with ice, and while that was an improvement, it still wasn’t a drink to enjoy. If you’re trying to write a booze blog and limit your alcohol intake to some degree, you simply can’t go wasting a drink on something you don’t enjoy.

It ended up being an easy go-to when I wanted a quick swig of something before going out, and for carrying around in my hipflask .It is surprisingly effective in a hipflask actually. I don’t know what it is, but that combination of cold, hard metal and pseudo-whisky gives the impression you’re drinking something a little more interesting than you actually are. A few people tried it out of the flask and were impressed.

Worries about getting rid of it were shortlived in the end because it was summer and there were plenty of occasions when warm-up swigs were required before heading out to various barbeques and all day drinking events. As such, it has actually left a void in my life… I don’t really have anything I don’t like enough to consume as flippantly. I suppose that dubious honour will have to fall on a cheap brand of rum… Mount Gay Eclipse, or the alarmingly cheap Liberty Ship - but more on those later…

So that's it. Thanks for joining me once again. I'll be back next week with something else.
Posted by Neil Cake at 09:58