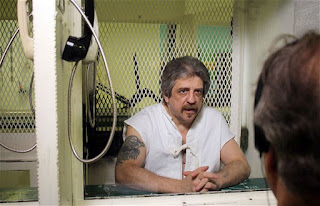 This first feature comes as a result of watching Werner Herzog’s documentary series Death Row which has been showing on Channel 4 recently. Episode one featured Hank Skinner who is currently on Death Row in Livingstone, Texas, following his conviction for the murder of his girlfriend and her two sons.

During one of the interviews, Skinner said one of the things he misses is eating avocado with tequila, lime and salt and pepper. ‘There’s no taste in the world like it,’ he said. I’m paraphrasing there. I don’t remember the exact words, but it was definitely something like that.

Well, I’ve got a bottle of tequila. I’ve got limes and salt and pepper, and stone me if avocados aren’t 59p at Aldi this week (is that cheap for an avocado? I don’t know). An experiment is planned.

I don’t actually have any experience with avocados. It wasn’t a fruit that made it into my parents’ house in Rotherham, but you know; I’ve eaten Mexican food. Brenda told me the avocado we bought was far too firm, so I had to leave it for a couple of weeks while it softened up. Apparently the idea is that you scoop the flesh out. I may still have started a little too early, since I wasn’t able to scoop much flesh out. It didn’t look like there was that much in there, to be honest, but if I’d waited longer it might have given up more goodness. Below is a picture of the building blocks of my experiment.

Check out the size of that stone! 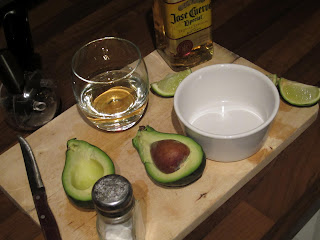 I don’t know if Skinner’s suggestion has a standard method to follow – Herzog chose not to pursue that particular line of questioning - so I had to make up my own. I scooped as much flesh as I could from the avocado into a bowl and liberally scattered salt and pepper over it. I wasn’t sure what to do with the limes, but ended up squeezing them into the glass of tequila. That’s Jose Cuervo Gold obviously. I’m not sure it makes much difference, but my Silver is almost gone, and I’m saving that for if Brenda fancies a Tequila Sunrise one of these days.

Results! As I said, not much flesh, but the texture and mild flavour of the avocado was nicely seasoned by the salt and pepper, and provided a pleasing contrast with the tequila and lime. It’s good that there’s a snack that makes your mouth alco-numb.

Perhaps this wasn’t what Herzog intended anyone to get from his ruminations on the death penalty, but it’s nice to know there is something pleasant we can learn from people living at the extremes of human existence.

So it's been a relatively short post today. I am prone to rambling on for two and a half thousand words from time to time, as it's easy to forget that people don't really actually read anything anymore; they just do that 'F' thing, don't they? Where they read the top line, skim down a few paragraphs, read another line, skim down a bit... I know I do. So I thought I'd keep it short today.

Another weekend is upon us, so go forth and try some booze-related things. I don't have any big plans this weekend. I think I'll just get to know one of my whiskies better and play on the Xbox a bit. Whatever you're doing, have a good one. I'll see you next week with... something or other.
Posted by Neil Cake at 03:55