What Can I Do With This Bottle of... Part 1: Glayva

In a previous post I wrote of a few simple, 2 ingredient drinks that you could make when you wanted something tasty and refreshing, but especially if you had a bottle of something that you just don’t like on its own. I’ve come into possession of a few of those recently, and the thought occurred to me – why let it sit untouched on your shelf, when you can use it to make something nice? And why leave it untouched on your shelf when you can experiment with it, and then write about it on your booze blog?

So the simple act of trying to find a use for the black sheep of my booze family, the Raggy Dolls of my alcoholic toy factory, the er… Nickelbacks of my North American rock bands… has led me to a new feature – What can I do with this bottle of…? None of the answers to this question are "stick it up your arse," by the way.

In this new feature, I’ll be actively setting myself challenges, but I won’t be limiting myself to simple drinks. Perhaps as this progresses I might be able to help you out if you’ve acquired something you aren’t keen on drinking. I could be a booze consultant, perhaps with a salary to match. 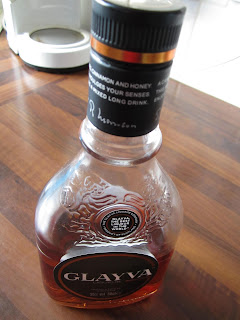 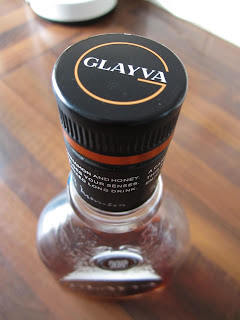 Bottles of Glayva were on offer a little while ago, and I decided to try it out. Glayva is a Scottish liqueur, based on whisky and a secret combination of spices with tangerines, cinnamon, almonds and honey. It falls under the Whyte and Mackay stable, and weighs in at 35% ABV.

Despite its on bottle boast of ‘the best liqueur in the world’, I have to tell you there’s a very good chance that it’s not the best liqueur in the world. In fact it tastes like that sweetened medicine you used to get as a child. And how do you substantiate a claim like that, anyway? Mind you, on that subject, www.glayva.com claims Glayva has won the ‘prestigious IWSC Award for Best Liqueur an unrivalled 5 times’. Well, they should know what they’re talking about.

A bit of digging into these prestigious awards has turned up some interesting information, including the results of the awards since 2008. In 2008, when Glayva was awarded a gold medal, the conclusion was,

“Light clear golden amber colour. Lifted fine nose, malted whisky with honeysuckle, caramelised citrus peel and aromatic herbs. The distillation and blending here is sensational. All the elements are clearly defined both on the nose and palate but meld superbly.”

The IWSC site could well prove a useful resource for future booze research, so I’ll be taking a note of that one, even if I can’t agree with it on the quality of Glayva. Glayva has been included on shortlists of gold and silver medal winners each year since 2008, but results from the preceding 39 years of competition are absent from the website, so I can’t really confirm whether Glayva actually was best liqueur at any point, nor whether it’s status is ‘unrivalled’.

In the last four years, though:

So here are the results of my experiments. I tried all of the following combinations. The first five were suggested by the official Glayva website, and the rest were my own ideas.

With ice – the simplest suggestion, and not strictly a combination, but I think it’s essential to try a liqueur in this form before taking investigations any further (and it is suggested on the Glayva website). For me, the holy grail of liqueurs is one that I can happily drink on its own over ice. There are surprisingly few that make the grade, unfortunately. The only one that springs to mind is Vom Fass’s Caipirinha Limette, though I understand that liqueurs are often intended as mixers, and therefore need to be a little sweeter than my palate would like.

You wouldn’t use the Caipirinha Limette as a mixer - to fill that little bottle you see in the picture below costs £12 (just for the liqueur, not the bottle), and it's far too nice to fritter away in cocktails.
So Glayva had its work cut out, and despite its glowing review from IWSC, it doesn’t do it for me. As I said; it reminds me of medicine.

With lemonade – I tried this with normal fizzy lemonade from a bottle, and was unimpressed. It was fine, but you wouldn’t keep buying Glayva for this combination. However, while browsing the excellent Rum Howler Blog, I noticed a review of Glayva, and a recommendation for drinking it with lemonade. It seems lemonade in North America is very different to lemonade in the UK. They make it themselves over there. It still looked very simple, so I figured I could give that a try.

The instructions were to use 1 oz of Glayva, the juice of half a lemon, 1 teaspoon of sugar, ice and top up with water. I’ve never quite found out what an ounce of liquid is, but I’ve got a double ended measuring cup, one measure on one end, two measures on the other.
I’ve always assumed this represented one and two ounces, but I could be wrong – it could just be non-specific measures, which is fine proportionally until you have to mix drinks with more specific units like tablespoons and millilitres. Similarly, I’ve never quite gotten round to figuring out how much juice is in half a lemon. I don’t tend to bother messing around with fresh lemons and limes; the bottled juice has always been adequate. I’m sure people with more sensitive palates than mine will tell you always to use fresh, but remember; you’ve got to drink it how you like it. I like getting my citrus from a bottle (most of the time).

I decided to use two measures of Glayva, rather than just the one, as well as two measures of lemon juice. I can’t remember whether I doubled up on sugar also, but you can always start with one teaspoon and add more if you want it.

It certainly was tastier than the one I’d made with bottled lemonade, but I think I overpowered the Glayva a little at first, and decided to add another non-specific splash of the liqueur. The results were even better. The sugar mostly just sat at the bottom. I tried to stir it well, but sugar doesn’t dissolve all that well at low temperature. I don’t think the sugar is all that necessary, to be fair.
Nevertheless, this made a good drink. I’ll probably make my own lemonade for mixing more frequently.

With ginger ale – a little bit disappointed. I’m not a massive fan of ginger ale, but for some reason the Glayva counteracts ginger ale’s natural spiciness, which leaves this a little more uninteresting than it ought to be. I had imagined they would work, but in my opinion they don’t.

With apple juice – a very pleasant surprise. This is probably my second favourite of all the combinations. The sweetness of the apple juice combines very well with the Glayva, and it seems to improve the further down the drink you get, despite being sure to mix very well at the start. I’ve found surprisingly few cocktails that are made with apple juice, so this is a useful one for finishing off those juice cartons.

With cranberry juice – a decent combination; just be sure not to use too much cranberry juice and completely eclipse the Glayva.
With Irn Bru – the first thing I thought of trying. Both are Scottish, both are similarly orange; it’s almost as if these two belonged together even before you get around to the tasting. They complement each other very well in that sphere too though – I’m surprised this combination wasn’t suggested on Glayva’s website (if you’re reading, Glayva – you can have this one for free). Irn Bru is the traditional Scottish hangover cure, perhaps Glayva and Irn Bru could be the traditional Scottish hair of the dog. I think I’m going to call it the Scotty Dog.

With lime juice – Frankly I haven’t tried anything so far that hasn’t been improved by the addition of lime juice. It could just be me, but I think lime juice is the ultimate drinker’s condiment. Ok, so I haven’t added it to everything, that would be crazy, but with this second Glayva experiment I found a real winner. With a glass of Glayva and half a lime left over from cooking, it was odds on that there was going to be a coming together. This is my favourite. Perhaps it won’t inspire me to buy another bottle of Glayva since there are loads of things that I could add lime juice to in its’ stead, but it will be useful to keep this one in mind for future reference.

That concludes my investigation into possible uses for Glayva. To recap, Irn Bru, lime juice and apple juice all make ideal partners for your Glayva. I hope you find this helpful. Feel free to let me know if you’ve found any combinations that I haven’t considered here, and be sure to check back another time, when I’ll have conducted investigations into such things as uses for the bottles of scotch that you don’t like, and what you can do with amaretto, Southern Comfort and peach schnapps, amongst other things.

A bank holiday weekend is approaching in the UK, so if you're lucky enough to get bank holidays off work, try and have fun and maybe try a few drinks. I'd just like to encourage you to visit the Rum Howler Blog, too if you get the chance.

I'll be taking Brenda out for a date and cocktails tonight, then watching the FA Cup Final on Saturday with some beers, going to Salford's Sounds From the Other City Festival on Sunday before finally recovering with a nice lie in and mellow bank holiday at home drinks on Monday. Then I'll be back next week with some more booze related bumf. Have a good 'un.

Email ThisBlogThis!Share to TwitterShare to FacebookShare to Pinterest
Labels: amaretto, Caipirinha Limette, Glayva, Irn Bru, IWSC, Peach Schnapps, Southern Comfort, Vom Fass, What can I do with this bottle of..., Whyte and Mackay