Has anyone ever invented a cocktail?

Having made quite a few different cocktails over the last couple of years, I had started to wonder how people came to create them – proper ones, nice ones like you get in cocktail books, not the ones where people just bung whatever they’ve got into a glass.

The first obstacle seemed to be possession of enough alcohol that one could wilfully waste it by throwing it into random concoctions that could well turn out to be undrinkable. It stands to reason then, that most cocktails are probably invented in bars, by people with access to alcohol they don’t have to pay for.

Luckily for me, for the last few months possession of enough alcohol has not been a problem. I have some bottles that I don’t want to waste, but there’s plenty there that’s available for experimentation. I just needed a place to start.

I decided to ask my friends whether any of them had invented a cocktail. One or two had (I’ll give you the recipes at the bottom of the article), including one my friends Paul and Victoria invented called the Gateaux Blaster (along with a number of variations that I’m not going to get into here – you can post your variations in the comments if you like, Paul). The flavours are similar to those of a black forest gateau in liquid form, so they neatly led to the memorable name. Their inspiration came from trying a Lumumba (chocolate milk, brandy and banana liqueur), and thinking it needed improvement. Some cocktails do need improvement, don’t they? 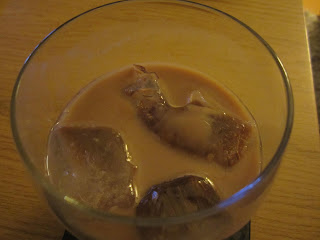 That’s a picture of the Gateaux Blaster.

The name of my friend Kathleen’s creation, The Blue Diamond came from the colour of the concoction and the shape it takes on in a martini glass. She has promised to submit a short piece about the creation of that one at some point, so keep an eye out for that.

So, I thought if I was going to write a blog about booze, then I was going to have to take advantage of my privileged alcohol collection and make my own cocktail too. I figured the best way to go about it would be to come up with a theme, and then to make a plan. Hopefully I could decide on flavours based on that theme, and the name would stem from that – because it has to have a cool name.

I’m from Yorkshire, so naturally the first theme that popped into my head was a Yorkshire cocktail. A bit of internet research showed that this wasn’t a particularly original idea, given that there was already a Yorkshire Cocktail Competition, but still, it was a starting point. The only problem was that it was February, and a vital ingredient wasn’t yet in season.

So I didn’t invent that one straight away.

Instead I accidentally invented a different cocktail. Back in July last year, I returned from a holiday in Spain with most of a bottle of Cuarenta Y Tres, or Licor 43. It’s a bizarre yellow liqueur, made from 43 different herbs and spices, with an alcohol content of 31% - so quite strong for a liqueur.  You can read a little more about it in my Booze Tourism - Spain post.

I found it too sweet to drink neat or over ice, but it made a perfect mixer. Adding it to a glass of lemonade or cola resulted in a satisfying twist to the flavour. It almost made cola taste like that vanilla Coke that you could get for a while and that I accidentally bought two bottles of once because it was 2 for the price of 1. Don’t let that put you off; it’s much better. It soon became a go-to for when I wanted a long alcoholic drink, but didn’t want a beer or cider.

So it came to pass that one Saturday I returned from 9 holes of golf played in cold, blustery Stockport, needing a bit of alcoholic refreshment that I hit upon the idea for my cocktail. 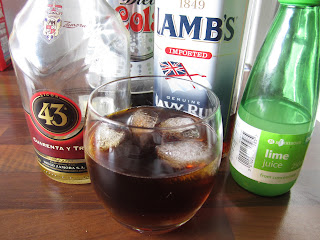 Above is a picture of it, and here’s the recipe:

Method:
Pour the licor 43, rum and lime juice into a glass (doesn’t matter which type, I like the one pictured), over ice. Top up with cola; stir vigorously.

For the rum, I’ve been using Lamb’s Navy Rum, which was on a special offer at Tesco recently. I like it neat or over ice, and it has quite a different taste to some of the other dark rums that are at the lower end of the price spectrum. I can’t quite put my finger on what it is yet, but it’s a little – shall we say – rough. And I like that. If you’re going to call it navy rum, you need the flavour to evoke images of a hard life on the seas, with pirates and scurvy and all that. Use any dark rum, though. It all makes for interesting variations.

Now, I haven’t gone the whole hog yet. I haven’t specified what glass this drink should be served in (the ones I use at home for whisky are suitable, though I know whisky enthusiasts will tell you this is the completely wrong kind of glass for whisky), but I have come up with a name: the Straw Donkey. Refer to my earlier booze tourism post for a clue as to why.

Unfortunately, I am almost out of Licor 43. I estimate there is enough left in the bottle to make one more cocktail, so that’ll be it until I can get hold of another bottle. There won’t be another Spanish golf holiday for me this year due to wedding plans and monetary austerity, but maybe I can persuade Chris and John to fetch another bottle of Licor 43 back for me…

Hopefully I’ll go on to invent many more cocktails, and if I do, I’ll be sure to put them up here for you. In the meantime, here are the recipes to a couple of cocktails my friends created. If you’ve ever invented one, please post it in the comments.