Oh what did you see, my blue-eyed son… at the 2012 Ramsbottom Chocolate Festival?

Yes, as I said in my recent  Booze Tourism: Belgium post, the weekend of 31 March/1 April saw the 4th annual Chocolate Festival take place in the small town of Ramsbottom, near Bury. Brenda’s birthday was approaching, so I tacked a visit on to her activities schedule. No, it didn’t have to be birthday related, but why not. Following on from the recent Booze Tourism: Belgium article, it would also provide an opportunity to decide once and for all whether chocolate and beer go together. [Ooh, the tension!]

A quick word on the chocolate – the variety and quality was excellent, and the prices somewhat reasonable. So we left with quite a lot of it, none of which survived the evening.

On to the booze. I was expecting there would be at least one stall specialising in different kinds of chocolate liqueur and chocolate beer, but I was sadly disappointed in that regard. There was one beer tent, selling one kind of chocolate stout (sorry, unable to find a link), one stall selling flavoured vodkas and another offering samples and selling chocolate wine. This stall was actually an extension of the Vineyard Wine Shop , situated up one of the side streets from the main market. That shop did carry more varieties, but I didn’t come to a festival to buy from a wine shop – I can do that anywhere. You don’t buy your beer from an off-licence on your way to a beer festival, do you? Or buy some chocolate from a newsagent round the corner from the chocolate festival. I did take the opportunity to peruse their selection of strong alcohol though, and I can confirm it was excellent.

On our first pass of the market, we were able to sample the chocolate wine (15%ABV), and we were both suitably impressed. It is a fortified British wine, flavoured with chocolate, and I would say more delicious than that combination sounds (not being overly fond of port). I was going to buy a bottle, but Brenda insisted on buying it for me. Later that evening I said we should save it for when we have friends round for dinner, and Brenda readily agreed. I think that had been her plan all along. If I’d been allowed to buy it, there would be nothing to stop me drinking it all to myself, would there? I’m on to you, Brenda! So now it sits atop our cupboard, and a full appraisal will have to wait until another time – when we have decided which friends we deem worthy. Let battle commence.

Following this first pass we made our first stop the beer tent. There were two bars within, but only one was selling chocolate beer. 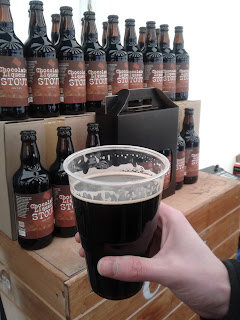 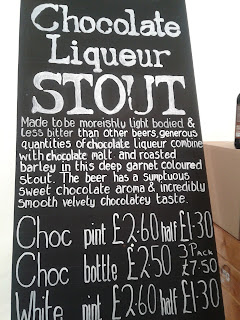 I couldn’t actually taste the chocolate element of this brew, but it was fairly pleasant, if not brimming with flavour. Once more it left me questioning the determination some people have to marry the two disparate elements of chocolate and beer.

I did mention in a previous post that there would be chocolate beer cocktails, and there were – at  First Chop, where they also do a fantastic ‘Lancashire Tapas’. Unfortunately we weren’t able to partake since we had elected to drive to the festival. I could have let Brenda drive us home, but that’s hardly in keeping with someone’s birthday treat, is it? Apologies then, if this means my investigation is somewhat incomplete. I think next year we’ll return with more people and use public transport.

What is telling is that there was little variety in the way of chocolate beer in general. As I said; one type in the beer tent, and three types in the wine shop. I can’t say whether there were more varieties in the pubs. I did manage to find one more alcohol related product – Blueberry and Grappa ice cream, courtesy of  Ginger's Comfort Emporium. This was a pleasing marriage, and the taste of the grappa shone through nicely. It is a sweet spirit, so it lends itself well to this kind of thing. And I just love grappa, so I’m happy to see it anywhere.

Am I able to draw any further conclusions pertaining to a possible forbidden love between chocolate and beer? Well, I can’t say my mind has been changed, and I really thought that it might have been. I still maintain that they cancel each other out . By all means, keep trying to get this to work, but I don’t think it’s going anywhere at the moment, and it’s really not necessary, though it would be nice to be able to sit down in the evening with a glass of beer and some chocolate… For now, if you’re going to do that, make sure you keep it Belgian – the beer and the chocolate.