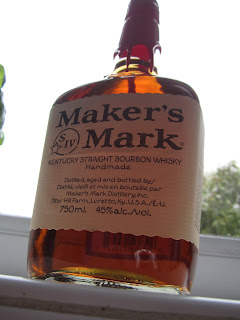 Oh, hello there. I was just doing a bit of work. What’s that? Yes, you’re absolutely right; it is time for this week’s booze blog post. This week, it’s part one of a two part poker night double-header.
The poker night is synonymous with drinking, so for me, this was an excuse to finally crack open that bottle of Maker’s Mark that my brother-in-law had brought me over from Canada. Maker’s Mark is Kentucky bourbon (45% ABV), so it seemed appropriate to an extent to be drinking some American whisky while playing a game that is widely associated with America – Mississippi steamboats, cowboys and the like.

I also thought this would be a good opportunity to offload a few bottles that were almost finished, but that I frankly didn’t need anymore, and would relish the opportunity to replace. I’d had a small bottle of Brugal gold rum sitting on the top of the cupboard probably for around two years, and I just hadn’t found much use for it. Too good to use in cocktails, but not quite suitable for drinking on its own, it just sat there stagnating. That one had to go.

Then there was the Courvoisier VSOP, that I’d bought with high hopes, only to be cruelly disappointed every time I tried it, and finally there was the remains of my Jose Cuervo Gold, that had frankly served me quite well. Well, now it’s gone, and I’m looking forward to an opportunity to try a different brand – preferably something 100% agave, but I’m sure there will be more about that in some future post.

We met at The Bull’s Head (David, Christian, Chris and me) for a quick pint (bottle of Newcastle Brown, in my case) before heading across the road to book a taxi to Dave’s. He’d already bought a deluxe poker set and picked me up some bottles of Double Maxim (4 for £6 – bargain) from his local Morrisons. I unloaded my booze, and prepared to make a start.

First on the agenda, a round of absinthe, prepared in the Bohemian style. That’s the one where you soak a teaspoon of sugar in the spirit before setting it alight and dropping it into a glass that already contains absinthe. Finally, douse the flames with a shot of water.

On this occasion I was far more successful than on any previous occasion I’d tried this. There were one or two minor outbreaks of fire, but I made sure to stir each glass thoroughly, thus ensuring that the sugar was fully dissolved into the drink. I necked mine, and it was actually quite nice.

That bottle of absinthe is almost entirely spent now. There may be enough for one more go though. I think I did quite well to get seven servings out of one 20cl bottle.

I wasn’t the only one to bring some interesting booze to the party. Midway through the first game David unveiled a mystery Chinese spirit that no one knew anything about. All the writing on the label was in Chinese, with the exception of the volume and ABV numbers – it was 52%, which was an exciting prospect. He said it had been a gift from one of his students. David is an academic in electrical engineering, so most of his students tend to be foreign. He often tells them to bring him a bottle of something the locals go for, and this was the result of one such transaction.

It was a completely clear liquid, and one that is clearly more suited to the far eastern palate than any of our western ones. I’ve tasted things like it before, but only things I’d picked up at random from the Chinese supermarket – specifically a can of bird’s nest soft drink, that I think was made with the spit of birds. I might have made that up at the time, having seen on a TV documentary once that a certain type of bird binds its nest together with spit. It has since become fact in my mind, so I’ll have to check it out next time I go.

The only picture that exists of this mystery spirit is provided by Dave. I’m afraid I didn’t think to take my camera, and the one on my phone doesn’t work. I’ve had a cursory search for “Chinese spirit” on Wikipedia, and it came up with this. There’s no real way of telling if this is the spirit in question, but it’s possible.

We did actually take the bottle with us to the Chinese takeaway that evening, to see if the people there could identify it. They couldn’t tell us what it was, but the lady suggested it may be worth around £200. I don’t think we can really trust that appraisal, given that she couldn’t identify it, but it was interesting nonetheless.

If the bottle was Baijiu, Wikipedia also reports that some brands go for as little as the price of a can of beer… so it could go either way.

We were already pretty smashed by the time we got to the Chinese, which made me having to play ‘guess which hand’ with the little girl there seem a bit weird, but you know, it was all fun.

After dinner (I literally just had salt and pepper chicken wings and salt and pepper spare ribs) it was back to the serious business of poker. We managed two games in all. I nearly won the first, but didn’t get anywhere near winning the second. I haven’t played many times in my life, and that’s how it always seems to go – nearly winning. We only played for a couple of pounds, so it was no great loss. In fact, I’m not even sure I paid my share because I didn’t have the right change.

After that it’s all a blur. I remember that we ended up walking part of the way back to town because we thought 45 minutes was too long to wait for a taxi. I don’t remember how we actually got to town, but I do know that Chris and I shared a taxi from town.

I also think I woke up in the night, feeling incredibly nauseous, but even of that I’m not certain. I woke up the next morning feeling like I weighed a ton. It’s not the worst hangover I’ve ever had, and in fact I was fairly compus mentus considering how much I’d had to drink. I was able to perform the day’s cleaning duties fairly well, but didn’t attempt much else.

Since that night, David has told me he’s come into possession of another bottle of the Chinese mystery spirit. He made the mistake of thanking his student, and saying it was nice. Sometimes it doesn’t pay to be polite.

Right! Well, I'm taking Mrs Cake out on a date tonight. Just dinner and drinks. We'll see where that leads (wink,wink) - probably to an argument and awkward silence! No. It'll be fun. We're looking forward to it. Good luck with whatever you have planned for the weekend, and see you next week!
Posted by Neil Cake at 08:32