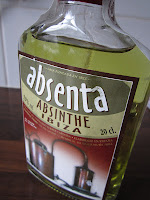 It’s been a while since I’ve done a ‘what I did at the weekend’ show and tell, but I figured this one was ripe for it. I went to see my friend Phil with a couple of ideas in mind, and we were able to give them a go. We emerged on Sunday morning wiser and slightly more fragile.

First on the agenda was cracking open that bottle of Fernando Ferrer Cardona absinthe I’d brought back from Ibiza. I mentioned it before in my honeymoonpost, and described some previous experiences with it – where I used the Bohemian Method – so it was high time to try the traditional French method, as described on Wikipedia.

I’ve also got a bit of a treat for you here – two high definition videos of the process. You’ll be able to hear us talking a bit of crap in the background (Phil swearing at the dog, for example), but try your best to ignore that.

The method then, is to pour a shot of absinthe into a glass, then place a sugar cube onto a slotted spoon, and hold it over the absinthe while dripping three to five shots of ice water onto the sugar cube. 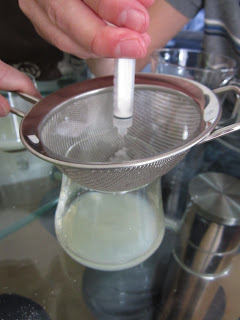 A bit of improvisation and a bit more preparation proved necessary here. As you’ll hear me saying on one of the videos, the first problem was getting some sugar cubes. Most cafes these days provide those sugar sachets rather than cubes, and none of the ‘express’ supermarkets that it was most convenient for me to shop in have anything other than standard granulated sugar. It made a trip to the big Tesco in Burnage necessary, but that was fine (though I do refer to it as having been ‘a nightmare’ on one of the videos); they had sugar cubes, and it meant I was able to buy Phil his Best Man present while I was there; a bottle of Highland Park 12 year old – for my money the best value single malt scotch there is.

Sugar cubes procured, it was then a matter of finding something to use as a slotted spoon. I don’t have (nor have ever seen) anything quite like the examples shown on Wikipedia, but one evening while doing the washing up, I found a small sieve that Mrs Cake had been using for baking-related activities. I put that aside to take with me. For our North American readers, ‘washing up’ is what people who don’t have dishwashers do when they need to get their dishes clean.

Knowing that Phil has a propensity for forgetting things, I also made sure he made some ice cubes a good few days in advance.

On starting the experiment, we realised it would be hard to measure three shots of water poured from a jug (only having one jug), so Phil weighed in with a most impressive piece of improv; using a pipette that he normally uses to give his dog painkillers. He assured me that we wouldn’t be getting any painkiller residue with our absinthe, and away we went.

As Wikipedia led us to expect, the bright green absinthe started to turn cloudy as the sugary water brought out the oily elements that aren’t so soluble in water. You can see this in the second of the two films, which shows the process from below  - Phil has a glass table. The first film shows more of the method. I was also surprised to see the efficiency with which the ice water decimated the cube of sugar. 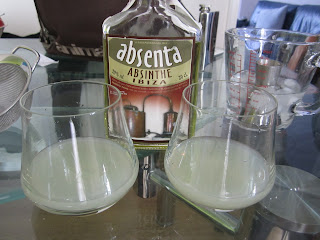 It wasn’t long before we had two glasses of absinthe, prepared in the French method. I’m not really sure whether you’re supposed to neck it or sip it at this stage, but given that I’ve taken to enjoying my spirits slowly and deliberately, I thought it would be good to try the absinthe in the same way.

I liked it at first, but that didn’t last. In future I think I’ll return to the more flamboyant Bohemian Method, which encourages you to just pour it down your throat like a character in an American film.

Despite adulterating the spirit to 17.5%, it was minging but we did feel a nice buzz. We grabbed a road beer, and headed into town to meet Gary for a bit of a pub crawl – but not before Phil insisted I try his Glenmorangie Lasanta, which I think was very nice – luxurious, nice body, pleasingly sour (just how I like my women!) – but it was hard to tell with the absinthe still casting its shadow over my taste buds.

Part two of the weekend experiment came during the pub crawl. While “researching” my Beer Glasses post, I had heard that there are people who can drink a whole pint of Guinness in three swigs. I don’t remember the exact wording, nor were there any specific instructions, but I am going to assume this means you are only allowed to swallow three times. It seemed like a good thing to have a go at.

I didn’t have any idea how easy or difficult this would be, so I entered the challenge with the attitude of a child for whom anything is still possible – you know; before the weight of the world has crushed your hopes and dreams. Well, I don’t really know now how this is done. I took the two biggest swigs I could, and the liquid consumed was frankly pathetic. I just downed the rest of the pint.

Gary used his turn to show us how he could pretty much pour a pint down his throat in under a second. It was mightily impressive, but clearly involved swallowing more than three times. Phil’s turn was more pathetic even than my attempt.

We forged ahead in a manner that only people who have downed a pint, and maybe a glass of absinthe can do – that is with reckless abandon and childlike exuberance. It was a fun weekend, and a good time was had by all.

This weekend is another big one for me, so hopefully there will be lots to tell you about afterwards. Tonight I have a Halloween party to attend, where I’ll be taking 8 cans of lager with me, in a proper old skool style, then tomorrow is the end of season golf tournament extravaganza. The weather won’t be ideal, but what that involves is one or two rounds of golf, followed (or divided) by a poker night (and hopefully some FIFA). It’s a good chance to dip into a couple of bottles of spirits, but I’m sure I’ll be covering that in some future post.

Whatever you’re doing, don’t forget your pumpkins, and have a good time.
Posted by Neil Cake at 06:44