732 Words on Tequila, and then a few more 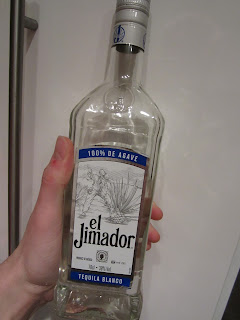 I’ve been amazed at the things I’ve learned (and found interesting) since applying myself to writing a blog about booze and, more importantly, taking an active interest in experimenting and investigating the delights it can bring. The most recent thing I have become interested in is tequila. I know, I’ve written posts on tequila before here, here and even here, but it has come to my notice that frankly, I have barely even scratched the surface because tequila is surprisingly underappreciated here in the UK.

It started innocuously enough; I thought that since I’d offloaded the last dregs of my Jose Cuervo Gold recently, I could see my way to getting a new bottle. The only brands you ever see in supermarkets are Jose Cuervo and Sierra, so I took a look at The Whisky Exchange, and found that there is actually a whole smorgasbord of different brands available – many for under £20 (plus P&P).

It was time to start working my way through. I had learned some time in the past that tequila is made by fermenting sugars found in the blue agave plant that grows above a certain altitude in Mexico (1500m), and then distilling the resulting wort twice (and sometimes a third time).

Ok, that’s not that interesting. In fact, a ten years younger me would have said, “boor-ring!”, like I did at that party 10 years ago when someone started telling me that whisky gets its colour from the barrels it is aged in. Actually, I didn’t say that out loud, I just found it really boring. No, what’s interesting to me is that cheaper tequilas like your standard Jose Cuervos only use 51% agave, and the rest of their spirit is distilled from cheaper things like molasses. I decided that it would be interesting to see what the real thing tasted like, so this time I would be more discerning, and get something that was 100% agave. To make choosing easier, I’d get the cheapest thing I could find that was 100% agave. All I needed was an excuse to get to a proper booze shop.

And that chance came one Saturday when frankly, I wasn’t feeling on top of the world, and the wife and I had a few jobs to do. I needed some cheering up, and decided we’d call off at Carrington’s in Didsbury on our way to one of our errands in Stretford.

Unfortunately, Carrington’s is more of a wine shop really, but they are still better stocked with spirits than any of your supermarkets. It’s a shame though, that they keep them all out of reach, behind the counter. I approached, and making plain my requirements found they had three bottles that fit the bill. I’d allocated myself a budget of £30 on this occasion, so that eliminated the first one that came in at £38, leaving two at around £25. One was 10p cheaper than the other, but that one was also 2% lighter in alcohol at 38%, so I went for the slightly dearer one until… I noticed that one was only 50cl against the cheaper one’s 70cl. I could have stood there all day, wondering what to do, so I reverted back to my original plan. The extra 20cl made the cheaper tequila significantly cheaper, so that would be my winner. And the winner was… el Jimador – named after the people who cultivate, select and pick the blue agave plants it is made with. To be fair, the other bottle was far more attractive but rules is rules.

£25 is a bit more than I’d been expecting to pay, given the prices at The Whisky Exchange but remember, you have to add £5.49 P&P to the £19.95 that they charge for this particular brand, so it only cost me a matter of pence more.

It was to be a while before I would crack it open as, being a little under the weather, I knew I wouldn’t be able to taste it - I’d been using the preceding evenings to lighten the load of my slightly less premium spirits. Still, the next weekend would be something to look forward to, since I decided I’d crack it open at the poker night that accompanied this year’s end of year golf tournament.

And you can read about that next week.

Before that, it’s the weekend. Tonight I’ll be staying in with the missus, having a drink and watching telly like we do every night, but this time we’re calling it a date, so that makes it special. We’re just excited for the weekend, so that’s fine. Tomorrow on the other hand, is the latest in the long line of pub crawls that could almost make the basis of a flimsy bestselling novel, or a romantic comedy starring Gwyneth Paltrow and Matthew McConaughey, if pub crawls were romantic. They aren’t; they're about a group of lads getting drunk and talking shit, so if you only see one movie this year, it isn’t going to be that one.  Why do so many movie trailers start with, “This year…”?

This year… Paul has planned a route along the canal that runs through Manchester, so that should be fun.