A couple of budget vodkas

“All vodka”, said my friend Paul on the eve of his trip to Russia, “is much of a muchness really”. He would be riding the Trans-Siberian Railway for something like three weeks, so  I had remarked on how I’d be looking forward to drinking vodka all day and trying some bizarre Russian varieries - because that’s what you do on these train journeys (presumably).  I was a little disappointed then, to hear that he wasn’t all that bothered about that.

Is he right, though about all vodkas being much of a muchness? I haven’t tried all the vodkas in the world. I haven’t even tried all the ones in the local supermarket, but I have made it my mission to do so… at some point.

Back before I embarked on this alcothusiastic voyage of discovery, before I had tried any single malt scotch, before I knew that spirits could be enjoyed for their flavours rather than for how quickly and how extremely they could get you drunk or how hard it made you look to be drinking them, I used to say I liked vodka. Not that I dislike it now, it’s just that it doesn’t seem to be the most interesting spirit in the world, does it? But… much of a muchness?

I’ve read that generally, the better a vodka is, the less flavour it has, which to me seems perverse. It suggests vodka is simply for achieving inebriation, rather than for enjoying. I don’t have a problem with people drinking to achieve inebriation as such, but I am confused that the best vodka I’ve ever tasted, which you’ll know if you’ve ever glanced at this blog before because I keep banging on about it… is Stolichnaya. And that’s damn tasty… so does that mean it’s bad?

Stolichnaya is an awesome vodka – it is equally tasty, whether you’ve stuck it in your freezer for a few hours, or are just drinking it at room temperature. It is very reasonably priced, and frequently on special offer – the last bottle I got was £14, which is almost criminal value. In fact, the only problem with it is that it’s so good I can’t let Mrs Cake use it to mix with. I have to buy another brand for that, but you know, I’m not complaining because that means I can try some more. And that brings me smoothly to the actual topic of this week’s post – a couple of budget vodka brands. 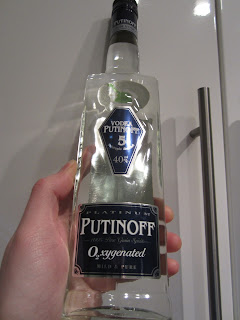 First up is Putinoff Platinum (40% ABV, 50cl, £9.49), a Lidl brand. I don’t normally shop at Lidl, but with a store just up the road from where I work, there wasn’t much chance of me staying away for long.

The variety and scope of booze on offer at Lidl was somewhat disappointing, but it is cheap. You have far more options at Aldi (that gives me an idea for a future post… Aldi vs Lidl… watch this space…), but there were two varieties of Putinoff to choose from – one was a standard red variety (under 40% and triple distilled) and the other, the blue or platinum variety, which is stronger, five times distilled and even ‘oxygenated’, whatever that means. Whatever it is, it is supposed to open up certain aromatic elements.

I did a little internet research on my return to the office, and found that Putinoff has been making quite a name for itself, scoring 10 out of 10 in the Daily Mirror, who also say it is better than the significantly pricier Grey Goose. I haven’t gotten around to that one yet, so that’s a verdict for another day. Quite how seriously you should take the Daily Mirror as an authority though is up for debate.

Well, I can only give you my verdict, so I will, but let’s simplify this as much as possible and score in terms of:

Much of a muchness?

Yes. This vodka doesn’t really taste of anything, and I didn’t even need to put it in the freezer to achieve that – low temperatures famously mask flavours in alcohol, giving the appearance of a better spirit than you actually have. So in theory, it is good, but I don’t judge vodka in that way, and with so many other brands to try it’s safe to say I won’t be buying it again, but if you need something to make your cocktails with, this’ll do. 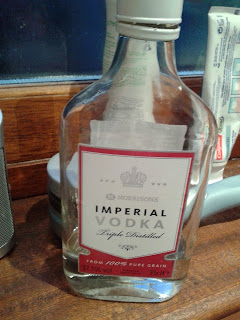 Moving on to our second budget brand then, this one is Morrison’s Imperial Vodka. Yes, a triple distilled, own brand vodka, weighing in at a libido-dampening 37.5% ABV. This one was only a 35cl bottle because it was purchased for Mrs Cake to drink with a mixer at a recent barbeque. Again, Morrison’s isn’t a shop we get into very often, and this brand won out because it was only £5.30 or something like that. Mrs Cake drank the whole thing that afternoon/evening with the exception of a couple of swigs that I managed to snaffle for research purposes.

Much of a muchness? Well, yes, but less so than that of the Putinoff Platinum, so if we were talking winners, Morrison’s comes out on top in this one despite its lower ABV. I would buy this again if say, I was on a tight budget, I just needed something to mix, and there was nothing else. To its credit itmanages to avoid that slight bitterness that many cheap vodkas (including the Putinoff) have.

I have compiled an ongoing vodka ranking system, but there are too many omissions to give it value at the moment, and so far I’ve only tried a variety of cheap ones really. I’ll see about splashing out a bit next time to see if there is actually any scope for any vodkas being particularly good. I’ll just say for now, on the question of all vodka being much of a muchness, Stolichnaya is way out in front with frankly little to choose between the others. So you might say Stoli is the exception that proves the rule, except that would be wrong because that would be a misuse of that commonly misused phrase. See this link for what I’m talking about there. Hmm… interesting.

Well, I think that’s all I wanted to say on this subject for the time being. No doubt I’ll be trying more vodkas and doing other drink related experiments in the future, so if you’d care to join me again, you’d be very welcome.

Before I go, please accept my apologies for making you wait 4 days for this post. I was away camping from Friday afternoon, and might have something to post about that in the coming weeks. While I’m on it, I think this week’s post might be late also… or early, I’ll keep you posted.
Posted by Neil Cake at 10:16