Good evening everybody. Thanks for joining me for another Friday evening blog post about alcohol. This week I’m reminiscing about the time I bought the cheapest “vermouth” in the shop…

Every other Saturday morning the missus and I collect together a few cook books, and plan our meals for the next two weeks. Not only does it help eliminate waste, but it also cuts down on the amount of time spent doing this job one day at a time, straight after work. It’s still not a job either of us enjoys doing (life’s full of those – cleaning, anyone?), but it certainly is better to get it out of the way in one go every fortnight.

The last one was actually slightly more interesting than usual, as I found a recipe that called for the use of dry vermouth. I’d been waiting for an opportunity to try a new bottle for some time, and it had finally presented itself in the form of groceries. Nevertheless, funds have been tight this month, so I figured it would be a good time to add another instalment of the Budget Brands series, and headed to Tesco with the intention of buying their own brand, which I believe is usually priced around £5. Finally I would be able to start on that martini research – once I remembered to get some olives.

On arriving at the small vermouth shelf in Tesco (why so much wine, so little vermouth?), I found I didn’t need to go for the own brand, as there was actually another brand, and it was even cheaper; Bellino Extra Dry (£3, 13% ABV). 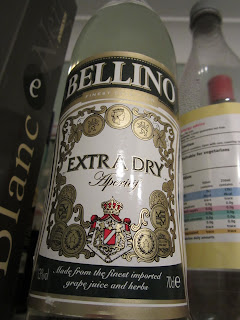 ‘Bellino’ doesn’t sound like an authentic Italian brand to me. I mean, it could be, but it just sounds like someone in the UK has made up a word that sounds like bellini to make their brand seem more authentic. A look at the bottle reveals that there is nothing Italian about this at all.

A closer look, which in hindsight perhaps I should have done before, reveals that this isn’t actually vermouth – it’s made from grape juice, whereas vermouth should be made from wine, so it looks like that £3 is going to turn out to be something of a false economy. I can’t investigate all the various types of martinis without actual vermouth, can I? I mean, I could, but my research would be refuted, and not worth the electricity used to type it, nor the kilobytes of memory used to store it. This is probably the wine equivalent of White Lightning.

Well, it’s still an alcoholic drink, and I was still interested in trying it. I did a little bit of research on the internet first, and found some reviews that frankly weren’t too encouraging – “smells like wet dog” being the most memorable. They ought to put that on the label. In fact, they should call it, “Cane Bagnato”.

Last Friday the time came to try it for myself, and I can now confirm it was indeed a false economy. I didn’t notice any detrimental effects on Nigella’s chicken dinner, but there’s not much reason for drinking this. I wouldn’t say it smells like wet dog exactly, but there isn’t anything particular pleasant about its aroma and, correspondingly the flavour is nothing to write a blog post about either. It’s like drinking a glass of cooking wine that’s been left out all night. And day.

If you’re ever considering buying this; think again. I don’t know if I’m going to end up drinking any more of it, so we’d best have some more vermouth themed recipes in our next meal plan.

I do like investigating budget brands, though the more discerning my tastes get, the less inclined I am to do so (will I ever buy that “Scotch Whisky” or “Vodka” from Aldi? – yeah, I suppose so when I’ve finally got some disposable income), but nevertheless, of all the ones I recall up to this point, for the sake of hyperbole, let’s say Bellino is the worst budget brand yet.

There you go. Just a short one this week. We’ve been having some lovely weather here, and it’s time now to go out and enjoy some more of it. Unusually for a Friday, I won’t be drinking until much later. I have to drive into town to rehearse for a gig on Sunday, so I’m already looking forward to getting back and cracking open something special. Whatever you’re up to, enjoy the weather and enjoy yer drinking. I’ll see you next time.
Posted by Neil Cake at 09:54