Hot Toddies: What? It's Medicinal!

Hot toddies: warm alcoholic drinks that are supposed to be beneficial when you’re feeling unwell. That whole concept is a little alien to me. Not so much that alcohol helps with ailments – even my non-drinking dad kept a bottle of vile tasting Indian brandy in the house for those occasions when I was ill growing up – but more the idea of warm alcoholic drinks. I’ve just never had a warm alcoholic drink I thought was particularly nice, or worth the effort.

I maintain that the best remedy for general illness is a joint. It makes you feel all fuzzy, and you can’t tell any longer whether you feel ill, or whether it’s the effects of the drug so you soon forget about it  and enjoy a day off work, watching DVDs. Unfortunately, this blog isn’t about weed (though I’m sure I could write a good one about that), it’s about booze.

So! After waiting what seemed like forever to get ill, I finally did, and I could get to work on investigating the hot toddy. I hoped the ‘hot’ part of any drinks I tried would turn out to be as simple as boiling the kettle. If it’s all about heating pans of milk and adding ingredients after so many minutes, it’s more like cooking. And drinking shouldn’t be like cooking (especially if you’re feeling unwell) – though it can provide a pleasant accompaniment to cooking. As the old adage goes, “I always cook with wine. Sometimes I even put it in the food!” Ha ha. Actually, I quite liked that when I first saw it.

That’s the problem with cocktails. Deciding which one to make is like deciding what to have for dinner. Then you’ve got to make it. And you might find you’ve run out of a vital ingredient. So you have to pick another one. And it turns out you chose badly; you spent 5 minutes making it, and it’s the tiniest drink in the world. Finished. Now what? Have another one? But I can’t be bothered to make another one. That’s probably why I’ve drifted away from cocktail experimentation recently.

Where was I? Oh yes, finally I had gotten ill, and was excited about the opportunity to try some hot alcoholic drinks in the spirit with which they are intended. First though, my mum offered the advice that I should have a brandy and two paracetamol before I went to bed. That’s the kind of doctor’s orders I like!

“Have you got any brandy?” she asked.

“Yeah, but not any particularly nice brandy. Does it have to be brandy, or will anything of that genre do?”

“Whisky doesn’t work.” Though I don’t see why it shouldn’t.

So cheap brandy it was; the Osborne’s 103 brandy de Jerez that I’d been failing to finish off for several years. Did it help? Well, I had an incredibly deep sleep, but that could have been due to the fact that I scarcely got any sleep at all the night before that.

I had a mad dream too, but dreams are supposed to be mad, aren’t they? When people say, “I had a really weird dream…” Of course you did; it was a dream.

So did it help? I suppose it did.

I tried having a whisky the next night, and I don’t actually recall whether it did me any good – I think I forgot to take the paracetomol. What I did notice was that I couldn’t taste anything, so it was a complete waste of one of my better whiskies. So it transpires that it was a good job I didn’t have any decent brandy, since it would have been a waste to drink that, too.

A particular barrier to enjoying your strong alcohol can be that your nasal passages might be completely blocked. Obviously the senses of smell and taste are connected, so you’re only getting half of the package. On top of that, you don’t get the chance to roll your liquor around and hold it in your mouth because at some point you have to take a breath, and you end up inhaling hot alcohol fumes into your fragile oesophagus. It’s just not as enjoyable. Having said that, you can at least enjoy the alcohol buzz that comes with drinking spirits a bit quicker – and that’s why the cheaper ones are so useful. It is always worth keeping something around for these occasions. 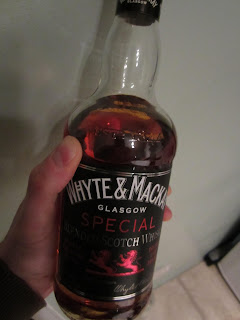 Getting a bit off-topic here, but I did get round to trying some hot toddies – pretty simple ones. First I tried an Irish Coffee, in which I used Whyte and MacKay scotch because I didn’t have any Irish whisky. I completely failed at floating the cream on the top. I’m going to have to learn that skill, one of these days. That’s all aesthetic anyway, since I think you tend to stir the cream into the coffee once it’s served.

The recipe I had said to use one and a half ounces of whisky, but for some reason (I must have been ill), I confused half measures with full measures, so I actually added three ounces of whisky by mistake. I have to say; I wasn’t enjoying it. I also had to add a lot more brown sugar than the single teaspoon recommended. I even had to add a couple of teaspoons of white sugar, too. I like my coffee sweet, but I still wasn’t able to finish the drink. 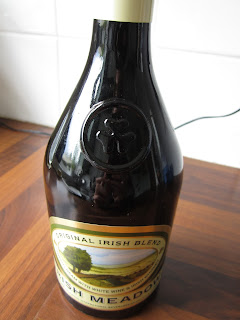 A better alternative that I discovered much later, is just to make an ordinary coffee (from a coffee maker is best), and make it exactly the way you normally like your coffee, but with the milk replaced by Irish Cream – unless you like your coffee black! What’cha gonna do then? I used the Irish Meadow (14.5% ABV), which is Tesco’s (very cheap) alternative to Baileys, and it went down a treat.

My first attempt though, the Irish Coffee, was something of a failure.

For my second hot toddy I tried Soco Spicy Cocoa, found on the Southern Comfort website. You basically make a cup of cocoa, add one and a half ounces of Southern Comfort and top with a pinch of cayenne pepper. Once again, I got my quantities mixed up, and added three measures of Southern Comfort. I think this drink was a little more successful, but I still failed to finish it. This only seems to confirm what I already suspected: hot toddies aren’t for me. I just don’t get hot alcoholic drinks.

I went on to try inventing a hot toddy  – adding a couple of shots of Tesco Value Brandy to a cup of hot Oxo, with garlic powder and salt and pepper – but I don’t think it’s going to catch on. Maybe I need to use less brandy, but then; what’s the point?

I asked Mrs Cake what the big idea was – why people espouse the merits of hot toddies when they’re feeling unwell. She said it was the process of being drunk, but I said you can do that with cold alcoholic drinks. She said the heat makes people feel cosy. But strong alcohol already does that!

So I guess that’s it – alcohol can make you feel a bit better when you’re sick, but drinking a nice spirit is a bit of a waste, so just put something strong in a hot drink. If you don’t like the taste like me, use it as an opportunity to dip into one of your less favoured bottles.

There is one more hot toddy I’d like to try, because it actually sounds nice. If that doesn’t work though, I’m just going to drink some cheap brandy. Then I can replace it and try a different one.

That's it for this week, then. Join me next week, when I might be returning to the theme of hot toddies, or I might be talking about something else. Either way, it's not to be missed.

Summer has hit the M to the C to the R good and proper today (for like, the first time in 7 years), so I'm sure everyone will be out in the beer gardens and barbequeing (sp?) and all that this weekend. I'll be out and about, and hopefully getting to the Chorlton Beer Festival tomorrow. I didn't even realise it was this weekend. Whatever you're up to, have a good un, and try to stay out of trouble. Also, spare a thought for all the people who are out drinking every weekend, whose peace, quiet and beer gardens you're ruining by turning out now it's nice. All right? Cool.
Posted by Neil Cake at 09:34