Good afternoon. Good weekend? Good.
I’m running out of ways to introduce a new week here on Drink it How You Like it, so apologies if on future occasions I just wade right on in there and start talking about something. How do people do it? I suppose I’ll need to read a few more blogs to find out.
On Friday I told you I was planning a vodka taste test and, true to my word, that’s what I did. I stuck the three bottles in the freezer when I got home, and left them for a couple of hours. The test itself was a lot of fun, and as much as there ever can be a human winner in a taste test, I won.
Brenda was instrumental in preparing the test and photographing it, so today’s booze porn is courtesy of her. Here’s a picture of me cradling the vodka like booze-babies or vodka-puppies. 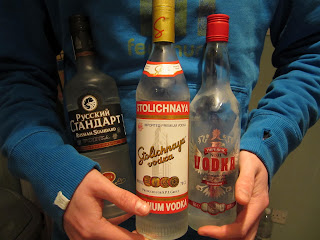 And here’s the three vodka brothers photographed with their respective glasses. 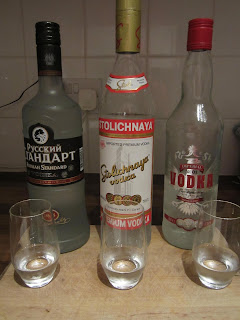 What you’re missing here is that Brenda stuck little post-it notes on each, numbered 1-3 so that she wouldn’t forget which glass contained which vodka, but she didn’t want to photograph the glasses with the post-its. That’s not quite in keeping with the half-assed philosophy that Drink it How You Like it espouses, but it’s good to know that someone has standards.
Well, the results are in. Yes, I know I told you that I won already, but there’s a bit of narrative to get through as well as announcing the best vodka.
Brenda presented the three glasses of vodka, and I took a good look to see if there was any visual difference. As you might expect, there was none. Next I took a good sniff of each, and determined the vodka in glass one was more fragrant. The other two didn’t really smell like anything.
Then the taste test; I recognised number 2 as Stolichnaya straight away – it is one that I’m familiar with – and of the three it was easily my favourite. There wasn’t much to choose between the other two but nevertheless, I had to make a call, and ultimately I correctly identified glass 1 as the Russian Standard and glass 3 as Tesco Imperial. It really could have gone either way – both are drinkable, but there was just something that suggested glass one might be of slightly higher quality. It might be that its alcohol content is the standard 40% while Tesco Imperial only manages the standard budget level of 37.5%.
In conclusion, if you’re looking for a vodka to sip, of these three Stolichnaya is hands down the winner. I’d say Russian Standard is a little better than Tesco’s budget Imperial brand, but is it worth the price discrepancy? Well… that’s up to you. You do get the extra 2.5% alcohol, it looks a little bit cooler, it smells nicer and its taste was marginally preferable. Having just checked the prices at tesco.com, it costs a little over £3 more per litre but that’s not that much really so, do what you will. For me, the final test will be next time I need to buy a bottle of vodka, though to be fair, I’ll probably try a different brand altogether. So that’s not helping you much…
Before I go, I’d just like to apologise for the lateness of this post (not that anyone’s really been waiting for it), but I’ve been a bit pushed for time, and don’t really like posting anything before I’ve had a proper chance to agonise over it, but here it is now. I’m still hoping to put out two more posts this week, and there’s still plenty I’m working on, so please come back soon when there’ll be (or maybe there won’t be) a look at a weird chilli infused product, a fond farewell to a bottle of booze that’s no longer with me or a celebration of booze tourism in Spain. Or something else. See you then.
Posted by Neil Cake at 05:07