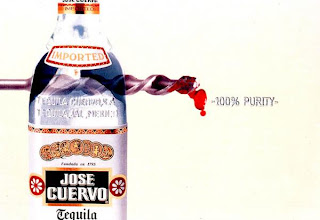 Who likes tequila? Who doesn’t like tequila? It will come as no surprise to people who know me that I do like it. Have you ever heard though, someone say, “I used to like tequila/gin/vodka until one day I drank too much and was sick. Now the smell of it makes me feel ill”? I think that’s a common story. With me though, it’s not hard liquor like tequila, gin or vodka; it’s Peach schnapps. 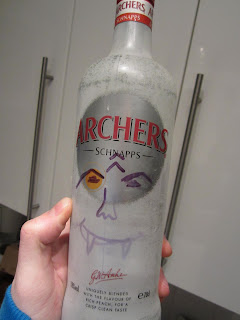 Back when I was 18, and living in Newcastle University’s Henderson Hall, my friends and I embarked on a period of drinking tequila – we put our usual 8 cans of Viborg on hold for a few weeks. Each Friday night, before heading out to the Student’s Union, we’d sit in someone’s room, one bottle of Jose Cuervo between two (I think they were 70cl in those days. Now they’re only 50cl), drinking until it was gone. I wouldn’t notice how drunk I was until I had to return to my room to fetch my coat, barrelling down 5 flights of stairs, up 4, then those 4 down again and the other 5 back up, bouncing off walls and giggling all the way. Such fun.
The booze porn at the top of the page there represents what the bottle looked like back then. It doesn’t look like that now.


I think we tried tequila slammers, then we tried necking a shot and biting a slice of lemon, but pretty soon I switched to drinking it straight. I’ve always had sensitive teeth, and after biting those lemons it was three days before I could eat anything of note. Not that I ate a lot in those days. If you still aren’t keen on straight tequila, believe me, you do start to like the taste after a while. As an added bonus, drinking it straight made people think I was hardcore.


Anyway, this continued for a while until one week our group won a bottle of Archers Peach Schnapps [insert a photo] at the pub quiz. We elected to save it until Friday night, and add it to our Friday night drinking routine.


Now, I wasn’t much of a drinker before I went to university, but clearly by the time we’d started drinking tequila I’d done enough training to be able to handle half a bottle in an hour or so. Clearly though, that was my limit, since my seventh of a bottle of peach schnapps was enough to tip me over the edge. I didn’t make it out that night. And instead of marvelling at how the effects of tequila didn’t seem to take effect until I stood up to go out… I couldn’t stand up (or go out), and spent about an hour sat in a doorway, watching the world spin round and round.


Eventually a couple of people helped me to my room and went out without me. I was sober by 1 o’ clock that morning, wide awake and bored. I think the next morning I was supposed to go and get a tattoo, but unlike me, my friend Jon had made it out to the Student's Union, and was still hungover, so we didn't go, and I never did get round to getting that tattoo.
The essence of nausea and peach schnapps lingered for quite a while, and left a psychological imprint that I’ve never quite shaken off. So I’ve never been able to touch it since. No one seems to like that stuff, mind.


How about you though? Do you like Peach Schnapps? What’s your Excess Induced Alcohol Aversion, and is there a story behind it?


That’s all from me for now. I should be back on Friday with the usual pre-weekend post, and there might even be another article. Until then though, enjoy yer booze and see you later.
Posted by Neil Cake at 06:07