The Friday Post and... BabyCham! The Happiest Drink in the World!

With average booze blog comes great responsibility… for photographing bottles and cans like they are actual members of the family. I’ve taken more photos of booze since I started this blog than I took during my entire two weeks in Canada; a fortnight that incorporated Christmas, New Year and a wedding.

As a result of all these photos, I have started to notice the little messages that manufacturers include on their various receptacles.

The first was Carlsberg Special Brew’s, “Best shared well chilled”. I found that one funny – best shared. Because no one in their right mind would drink a can of Special Brew on their own, would they? And if they did, they certainly wouldn’t enjoy it. No. It’s far better to share it. A problem shared is a problem halved, they say.

The second little message I noticed was when Brenda and I bought a few bottles of BabyCham recently. I know what you’re thinking, but you know, I’d never tried it and I remembered the adverts from the 80s. Brenda had never heard of it, but it was on a documentary we were watching. We thought it would be fun to try it, and to write about it. 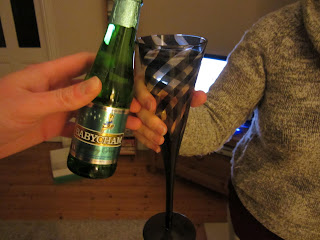 I’ve mentioned before that Brenda is Canadian. What that means is that she is missing a lot of the cultural references that normal British people take for granted. She doesn’t know who Jimmy Saville was, she doesn’t know how good Only Fools and Horses is and she knows Ant and Dec, but not PJ and Duncan. All I’m saying is, if you’re playing one of those editions of Trivial Pursuit that focus on the UK from any time before 2001, you don’t want Brenda on your team. Ok?

So she wasn’t aware of BabyCham, or indeed any of the adverts that were tattooed onto our brains during childhood.

I just did a quick phone test with Brenda:
ME: Brenda, can you tell me if any of these adverts mean anything to you?
BRENDA: Ok.
ME: The Milk Tray man.
BRENDA: No…
ME: Shake n Vac?
BRENDA: Yes.
ME: What does it mean?
BRENDA: I don’t know.
ME: Do you know the tune? [I sing the tune]
BRENDA: No.
ME: So how do you know it?
BRENDA: I’ve seen it! [she means on one of those nostalgic British TV shows like, “I love 1983” or something]
ME: What about Danny Baker’s Doorstep Challenge.
BRENDA: No.
ME: R White’s secret lemonade drinker?
BRENDA: What?
ME: [singing the tune]. What about Kia-Ora, “it’s not for crows!” and, “I’ll be your dawg!”
BRENDA: No.

So there you go. She almost got a point with Shake n Vac, but not quite. And she’d never heard of BabyCham.

Now, BabyCham is possibly the girliest drink there is. It’s perry (pear cider), and it comes in teeny-tiny little bottles. It’s like fake champagne – hence the name. However, across the top of the label is written, “The Happiest Drink in the World”. 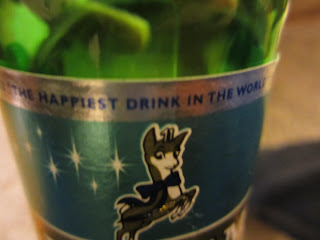 Quite a claim there. You sure about that? I’m not saying it’s not true, and I’m not even going to get into hardcore grammar policing but, what evidence can that possibly be based on? And what is the happiest drink in the world?

I would be tempted to say tequila, and that’s not just because it makes Tony from Terrorvision happy. It just is. It isn’t a maudlin drink, it isn’t ponderous, it’s just get-wasted-have-a-laugh-remember-nothing fun.

Or what about (real) champagne? That’s always drunk at happy occasions – weddings, lottery wins – and in films at least, the popping of a champagne cork is always greeted with a chorus of “Hooray!” You don’t get that at the click of a tequila cap being broken do you?

That champagne cheer thing is a bit of a private joke of ours. People don’t really cheer when a champagne cork pops in real life, but Brenda and I do, for fun. When strolling around Venice we heard a random champagne cork pop, and Brenda cheered out loud. I was in the middle of saying something, but I laughed heartily about it immediately after I’d finished talking.

We need to get that joke out there, because I cheered when I opened a sparkling wine bottle for a friend at a party recently, and everyone just looked embarrassed and pretended it didn’t happen.

I’m rambling, but that was actually the most interesting thing I have to write about BabyCham. I can’t really imagine who buys it, but if you do; is it your happiest drink in the world? And if not, what is?

It’s sure been a long week, but it is the weekend again. Congratulations to everyone that made it [this far]. I don’t have any particular booze events going on this weekend, though I was thinking of doing a vodka taste test tonight. I have three different ones at the moment – the budget Tesco Imperial, Stolichnaya and the Russian Standard. I’ll probably get Brenda to pour them into three glasses, and I’ll work my way through. I know I like Stolichnaya, and the Tesco one is drinkable, but it will be interesting to see what the Russian Standard is like, and determine which is my favourite. Fun, fun, fun. I’ll probably try a couple of other drinks, too.

Whatever you’re getting up to, have a good one and hopefully I’ll see you next week for another update (Monday), a post (Wednesday), and a look ahead to next weekend (Friday).
Posted by Neil Cake at 04:58