How do you select wine?

This week’s post comes to you a couple of days early because I won’t be around on Friday evening, when I normally add the finishing touches, and release it into the abyss. That’s right, my birthday treat has arrived, and the missus and I are headed on a road trip to the Isle of Islay, where they make several of my favourite whiskies. I never thought I’d go there, but there you go; Mrs Cake is known to pull out all the stops from time to time. I will tell you all about the trip and all the things I learn at some point in the future, but don’t be expecting it next week; it will probably take me a good couple of months to write it up. For now though, please enjoy this week’s post, which is concerned with how difficult it is for novices like me to go wine shopping.

Last Saturday the wife and I hosted a dinner party at our house for 8 of my friends from work. It was a lot of fun and a lot of work (pretty near a whole day cooking in the kitchen) that the missus organised and coordinated with military precision, and it required a lot of drinking. To facilitate the drinking though, I got to indulge in one of my favourite pastimes; booze shopping.

I’ve been budgeting in a ruthless manner since paying for numerous holidays in 2011 and the wedding in 2012 led to my credit card bill going through the roof, so I rather optimistically planned to get all the booze in for £30. Oddly enough, and thanks to Tesco’s clubcard scheme, I only exceeded that by £5.

It was a case of quantity not quality really, so not the most exciting trip ever, but it did give me chance to explore the possibilities of some budget brands, and I was able to leave feeling only a minimum quantity of guilt.

What was most challenging though, was the purchase of the wine. In case you missed it any of the previous times I said it, I’m just not into wine. I don’t find it interesting, I don’t find it particularly tasty, I don’t find it particularly demands that I drink it – unlike other kinds of booze, and I really don’t enjoy shopping for it. I wouldn’t go so far as to say I dislike wine, but let’s say I have a glass of wine: it will take me ages to drink that glass, and then I won’t want another one. So suffice to say; I don’t really see the point, and I don’t see how anyone can be that bothered about it.

But! Sometimes it is necessary to buy wine, like when you’re hosting a party and some of the guests are going to be girls. Sure, I knew everyone would be bringing their own booze, but you do need to provide some basic provisions. To complicate things, two of our guests were Will and Catriona, who actively like wine. A lot. So I felt I needed to get some decent wine, if at all possible, even though it seemed likely we’d end up with it at the end of the night, and there’s no point in us ending up with it, because we just don’t drink wine. I drink beer and spirits and Mrs Cake just doesn’t tend to drink casually at all.

The other purchases were more or less trouble free. I started with vodka from Aldi. Mrs Cake had planned vodka jellies, and I wasn’t sure there was enough Red Square left to do the job. It turned out that there wasn’t – we used half a pint of vodka, half a pint of boiling water and half a pint of cold water to make the jelly, so the purchase of Aldi’s more premium brand proved necessary. I was tempted to get the brand that is just called “Vodka”, but they did have a Tamova Blue Label premium variety (as opposed to the standard red label), and I figured I’d go for that this time. It’s 50cl, 40% ABV, and £9.50 or something like that.

I’ve tried it on its own since, and it’s neither better nor worse than any other standard budget vodka, from what I can tell without doing a proper taste test. I think it’s a bit stronger than the red Tamova, and a little bit more expensive, so that’s probably why it’s called ‘premium’.

I overruled Mrs Cake’s insistence that we should get the wine from Aldi. Sure, for us it’s ok, but “bottled exclusively for Aldi” just doesn’t seem right when it’s for other people.

It was off to Tesco then, where I picked up some beers (Tuborg, that only I drank), cider (Magners, that no one drank, but I have been enjoying since), and Sierra Reposado tequila (gold, 38% ABV, 50cl) that I used to make a variety of margarita (Cadillac) that went down quite well. I hadn’t seen the gold variety of Sierra before, and it now holds the record for briefest lifespan (about 3 hours from breaking the seal to placing the empty bottle in the recycling). About 24 measures were required for the cocktail, and we finished the rest off in shots. That’s what I bought it for, and it won’t be missed. My el Jimador, 100% agave has frankly exposed cheaper tequila for what it really is. I kept that under wraps for myself. 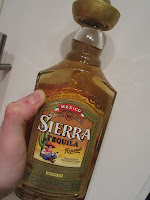 Yeah whatever, Neil; what about the wine? I’m getting to that: how do you choose wine? There’s so fricking much of it! Why is there so much? The prices vary greatly, and experts tell you that the more you pay, the better variety of grape you’re getting, but wine ‘experts’ on TV tell you that cheaper ones can be just as good… It’s difficult, and I don’t even care that much, but I did want my wine-appreciating friends to enjoy it.

Nevertheless, I didn’t want to go overboard, and figured a bottle of white and a bottle of red would do. From what I’ve heard, pink (or rose) seems to have fallen somewhat out of general favour of late, and it seems we’ve already got two bottles of that in our cupboard.

So the first stop was the special offers section. If it said ‘half price’ and half price was £5 or less, it had a chance. I was struggling, because I have an unspoken rule that you shouldn’t buy Blossom Hill, Jacob’s Creek or Kumala (amongst others). I’m not sure why, but they just seem ordinary. Everyone’s had them before, they’re always on offer, and while I’m far from qualified enough to be a wine snob, I just don’t think they’re going to impress anyone when they see the bottle.

Mrs Cake offered, “look for ones that have got badges”. She meant of course, wines that have won awards – which is nearly all the ones in Aldi, but surprisingly few of the ones in Tesco. In one or two instances there were bottles that looked like they’d got badges, but we couldn’t be sure, and figured they were a cunning ploy to trick amateurs like us into buying them.


Finally, after what seemed like forever, we chose two bottles. I have no idea what they were, where they were from, what grape variety they were made from or anything like that because, as I say, wine just isn’t interesting to me, so if you were hoping for some detail, I’m sorry to disappoint you.

At the party I made a point of asking people who cared about wine, how they went about selecting it. They said go to the special offer section, and look for badges. It seems we’d done the right thing. A lot of the awards are based on blind taste tests (IWSC or example), so you’d think they must be all right if they’ve got a badge. It doesn’t mean you’ll necessarily agree, though.

We managed to foist the bottle of red on our guests, but the white remained untouched, and has been added to the wine graveyard that takes up one half of my Special Spirits Cabinet. We also managed to acquire two further bottles from guests. Ass! And some cider – yay

I tried a glass of red a couple of days later, and I didn’t like it at all. Then, later in the week I stuck a half finished bottle of pink in the fridge and tried a glass – and that was really nice. Perhaps it’s too early to write pink wine off? I don’t know what brand it was, but it was pink so you probably don’t care anyway.

The vodka jellies went down very well, the cocktails went down very well, and the only thing that didn’t was my aguardiente de orujo (RuaVieja). I couldn’t believe it, but no one liked it AT ALL. I mean, that’s fine; more for me, but no one could believe I would enjoy drinking it; they looked at me like I was crazy or something. Well, I like it, I don’t care what anyone else thinks. Sadly it is now finished, but that just means I can start thinking about replacing it.

So, I’d like to know if you have any suggestions for making the chore of selecting wine easier. Don’t be shy. Be warned though, I don’t want recommendations, I want methods. Thanks in advance.
Posted by Neil Cake at 10:05