Good evening everyone, it sure is nice to welcome you to this week’s blogpost. Just a brief one this week, and while I don’t want to lower your expectations too much, it probably isn’t the best thing I’ve ever written. Nevertheless, I hope you enjoy it. You can start now.

Since returning from my honeymoon in Ibiza [now more than] a few months ago, I’d been waiting for an opportunity to conduct another booze wars experiment; pitting the bargain orujo I’d picked up (RuaVieja, 42% ABV) against the cheapest grappa I’ve ever seen in the UK, Tesco’s GrappaJulia Superiore (38% ABV).

I think this is the first time I’ve ever had two spirits of this type in the house at the same time, so the chance to compare was not one I was going to pass up. Grappa and orujo are both spirits made from distilling pomace, which is the stuff that is left over from wine making – stems, skins etc. It differs from brandy in that brandy is actually distilled wine. From my experiments so far, I have to say I have a preference for pomace spirit. 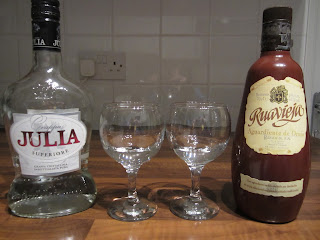 I took out two glasses as you can see, and poured similar amounts of spirit into each. Both looked identical to me, so I moved straight on to the smell test. I had a good sniff, and detected that the Julia is significantly more fragrant than the RuaVieja. I offered them to Mrs Cake to smell, but she has a cold and can’t smell anything. So, into the lounge I went for some tasting and to finish watching The Taking of Pelham 123 with John Travolta and Denzel Washington (which surprisingly isn’t bad – I know!).

Proper tastings should be conducted without distractions according to whisky expert Jim Murray, but real life is conducted with background noise and entertainment. I was drinking in real life, so getting comfy in front of the telly was the method.

In contrast to the smell test, the RuaVieja performs better than the Julia in terms of flavour. Julia is sweet on entry but bitter at the finish, while RuaVieja appears to me to have greater depth. It’s a pleasure to drink, and an absolute bargain whether you pay the 3 euros 90 that I was lucky enough to get it for (have I mentioned that before?), or the full price of 12 Euros – which is still cheaper than the Julia.

Julia isn’t bad when you think about how much you tend to have to pay for grappa in the UK. It isn’t the best quality, but if you really need a bottle of grappa, you can’t turn your nose up at £13. ‘Who really needs a bottle of grappa?’ you might ask. Well: I do. Perhaps not at the moment; I’ve got the RuaVieja, and I think I’ll be drinking that first.

Another trip to Spain is on the cards this summer, so on top of everything I’m looking forward to hitting the booze shops and the duty free again. I think you can be fairly sure I’ll be picking up some more orujo at some point along the way.

In other news, last night saw the first physical meeting of the Manchester Whisky Club, which went off very successfully. I’ll probably write a bit more about that in the coming weeks. Once again, it is the weekend, and as usual drink features very highly on my agenda – going out, staying in; it doesn’t matter, I’ve got some booze and it’s going in mah belly. Tonight I’m thinking pub, homemade pizza, cans, homemade caipirinhas, cracking open a new bottle of vodka and special spirits to finish. That was quite a poetic sentence. Tomorrow I’m thinking pub sesh and dinner out. Sunday I’m thinking a couple of quiet drinks at home.

Before I take my leave then, I’d like to wish you all a splendid weekend, and I hope you’ll pop back next week when I’ll have something else for you, something better. Hopefully. Till then, you can follow me on Twitter if you like inane comments about booze and stupid thoughts that seem funny when you type them, but actually aren’t. Laters!