Booze Terminology and James Bond - Drinking it How He Likes it.

You’ll be aware that there is such a thing as accepted booze terminology – phrases like ‘on the rocks’, ‘straight up’ or er… “shaken – not stirred”.
I expect these terms evolved through the need for simplicity and brevity, so you know that if you ask for the right thing, you’ll get it – and quickly. It would probably be useful if this could be carried over into some other aspects of human interaction like… getting a haircut, for example.
How are you supposed to describe the cut you want, and be sure that the barber is going to know what you mean? I once heard a man in the chair next to me tell the barber that he wanted 40% cutting off. I thought that was quite clever, but it still wouldn’t work for me since I can’t really be sure how much I need cutting off as a percentage. And the amount would vary depending on how often you went for a haircut – unless you always went with the exact same frequency.
Maybe he measured it once after a good haircut, and now measures it before every haircut. Then he could just do a simple calculation to figure out what percentage of existing hair needs to be removed to achieve optimum hair length.
There’s a simple formula: P=100 – (x/y)*100, where P is percentage to be removed, x is optimum length and y is current length.
But what if you did your calculation and P came out to be 87.5%? Could you trust your barber to make an accurate eyeball measurement of your hair, splitting it into 100 parts and removing 87 and a half of them?
The last time I went for a haircut, a man came in after me and asked for number 2 on the back and sides, and half to be cut off the top, but more at the back than the front. The barber just looked confused.
Anyway, I tend to be a bit bothered by some of these drinking terms [remember, I was talking about them earlier…] – ‘on the rocks’ in particular. For one thing, it means ‘with ice’, and it’s quicker to say ‘with ice’ than ‘on the rocks’. It also bothers me because… it just sounds smug – like you’re inordinately proud of yourself for ordering a drink with ice. And how come you have ‘scotch on the rocks’, but you wouldn’t ask for coke on the rocks?
Wondering about where this term came from has led me to do some very geeky internet searching. It turns out that rock (according to thefreedictionary.com) is any hard mass of consolidated mineral matter – such as a boulder. I then wondered whether water is a mineral. I thought maybe it was, since you have the game, “Animal, Vegetable or Mineral”. Supposedly everything in the world must come under those three headings. Water isn’t an animal or vegetable, so it must be a mineral. However, according to geology.com, to be a mineral a substance must satisfy 5 requirements:
Water isn’t solid, so it can’t be a mineral. Ice is solid, but due to condition number 1, it can only count as a mineral if it is naturally occurring. Therefore, anytime you make, or order a drink with ice cubes, the ice only counts as rock if it was not made in a freezer.


Therefore, I have proven that the phrase ‘on the rocks’ is stupid.
The problem is that whenever I order a whisky with ice, and the barman always says, ‘on the rocks?’ as if I’m doing it wrong.
People might tell you that martinis are supposed to be stirred, not shaken; therefore James Bond is wrong when he has his shaken – not stirred. But that’s obvious, isn’t it? Otherwise he wouldn’t need to specify when he orders it that he doesn’t want it stirred.*
I wonder if James Bond (in a world where he actually exists as a person) ever just asked for a “martini – shaken.”
The bar tender would have tilted his head to a slight angle, tutted and said, “actually sir, martini’s are supposed to be stirred” – in a French accent.
“I know,” Bond would have replied, “but I want mine shaken”.
After this happened a couple of times he would have started adding, “not stirred” to his order. It’s either that or change his drink; “forget it! I’ll just have a scotch with ice.”
“I think the gentleman means, on the rocks…”
I’m not sure which of the original Fleming books that scene is in. It’s probably an unpublished prequel to Dr No, but nevertheless, this reveals that James Bond is the living embodiment of the ethos behind Drink it How You Like It.
Once when I was in the club Space, in Ibiza, I decided to order a scotch, and I figured I’d avoid any confusion by asking for it on the rocks, since they’d be sure to understand that… but I was greeted with a blank look.
“Que?”
“On the rocks.”
“Que?”
“Scotch – on the rocks.”
“?”
“With ice.”
“Si!”
So that goes to show; on the rocks is not a universally recognised term, it isn’t scientifically accurate and I don’t have to say it if I don’t want to.
Have you ever invented a phrase like this that has caught on? I think that should be the aim, really. I’m working on it. My most successful so far is “Bread chest”, which is a term to describe the indigestion you get when you eat too much bread, too fast. It’s caught on with my friends, but needs that extra push to make it into the Oxford English Dictionary. These things take time though, so it could make it eventually.
Right! That’s it for today then. Thanks for reading this inane drivel. There’s a good chance I’ll be back with a post later in the week, but until then feel free to comment.
I've realised that I haven't provided any booze porn for you today. I know that's the main reason you come here, so here's a picture I found on my phone - from when I owned a watch that wasn't broken and a phone that had a working camera on it. That must have been my birthday last year, since I'm wearing my smart shirt. It's one of my top 3 whiskies, Caol Ila 12 year old. 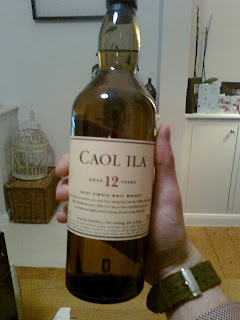 ·        * It transpires from checking in my three cocktail books, that there are martinis that are made by shaking and not by stirring. Perhaps this is a result of James Bond’s influence? I’m going to say for the sake of argument, for future comic effect, and because it’s encouraging to people like me who want to be awkward and do things differently from time to time, that it is.
Posted by Neil Cake at 05:22