Vermouth is classed as a fortified and aromatised wine. So according to the useful website http://vermouth101.com/, this means that it has been infused with botanicals to add flavour and colour, and also that the alcohol percentage of the wine has been increased by the addition of spirits. It’s a good way to improve bad wine.
I didn’t know what vermouth was until I started making cocktails, and found that it was used in quite a few (including the world famous Martini), though I had seen it in several Italian cookery recipes. Never though, had I heard of anyone actually drinking it. Apparently that does happen, and you can drink it over ice.
I’ve acquired a couple of bottles – one was brought over by my friend Dave for my first ever cocktail bonanza, and the other was a cheap one that I bought from Aldi for cooking. I had added them to a couple of cocktails, but recently I thought I’d try drinking them.
I understand from the very informative website I referenced earlier that the quality of your vermouth deteriorates pretty quickly, and I’m afraid I’ve had these two bottles for quite a while now, so I can’t pretend that they’re going to taste fresh and exactly as they should, but… I really like them. 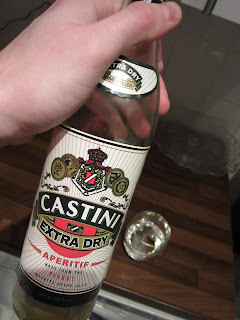 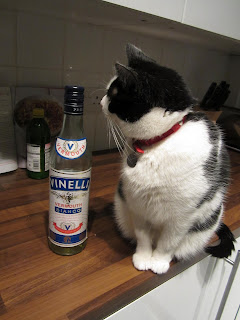