Last week I hit you with a post about the art of pub crawling in advance of my first planned pub crawl since Drink it How You Like it began. I realised over the weekend though, that there was something important I forgot to include in my basic guidelines – something that I actually fell foul of this weekend, and that luckily didn’t result in disaster; don’t drink too much on the night before your planned pub crawl.
This is a very easy mistake to make, since excitement can be running quite high as the weekend approaches. As I told you, I had planned to tackle the famous Didsbury Dozen on Saturday, and had selected an experienced and hardy crew. However, being that my fiancée Brenda, would be out of town from Friday it seemed necessary to go out for some drinks on Friday, too. So that led to a mini pub crawl of Manchester’s Oxford Road area. Being all excited, I drank far too much, and didn’t bother having any food, so it all resulted in a fairly severe hangover on Saturday morning. By the time my first group of friends arrived at 11.30 I wasn’t feeling much better and still looked like I’d just woken up, though I’d actually been up since 7 feeling that the house was too hot.
Now some people (future alcoholics) will say, ‘hair of the dog!’ because that’s supposed to work, and I did consider having a can of beer at 9am, but it’s a fine line. Yes, a fine line. So I’m here to tell you: you can’t rely on hair of the dog – it’s still a lottery. Your second drinking session might be a success, or it might turn out that you peaked a day too early, the beers aren’t going to go down nicely that day at all, and you’re going to be tired and grumpy and might carry a headache with you the whole way.
Luckily for me, this weekend the gods of beer were on my side. A couple of cans at my friend Chris’ house for the early afternoon match soon led to three pints of Directors and lunch at The Didsbury, and we were off. We didn’t visit 12 pubs, but given that we did visit 8, had 3 pints in the first one, and 2 cans beforehand, it transpired that we drank enough to have visited 12 pubs.
And we had two meals! This is an unprecedented development in pub crawling for me. I’m notorious for not wanting to eat once I’ve started drinking, but it is essential for prolonging the duration of your crawl. It is useful to have pubs on your route that do decent food so you can take care of the food requirement without taking a break from the drinking. It’s also great if it means you can get the beers brought to you for a couple of rounds instead of having to go to the bar.
The Didsbury is an ideal starting point if you’re intending on trying a dozen Didsbury pubs one day. It’s situated between Didsbury Village and Parrs Wood, so it’s pretty much the first pub in Didsbury (coming from the Stockport side). It has a decent reputation for food, and tends to be very popular on Sunday lunchtimes, but then so are most gastro-pubs in this country. I have to say, the rump steak I had was all right, but given the pub’s reputation, I expected something a bit better. Nevertheless, beer was first class - the Directors was going down very well, and I’m not a food blogger anyway.
I don’t remember the names of all the pubs we visited, but we kept the venues fairly old skool, so it was traditional [read: old man pubs] all the way really. Fletcher Moss was probably the best stocked bar in terms of spirits but generally we didn’t have too much trouble making our various selections.
I think I took the award for most expensive round with £27.20 when some of us decided to have Sailor Jerrys and some Courvoisiers. I think Gav had the cheapest round - £11, when he stole the round I was in the process of buying at The Didsbury.
Along the way I unveiled The Devils Breath which you can read about in an earlier post, and it proved very popular. Then we almost started a food fight in the Four in Hand before good sense reasserted itself and we finally strayed over the border into Withington with a pub who’s name I can’t remember, but it had a proper tiled floor, and seemed to have been lifted directly from a mining town in the 50s. Nearly everyone was really impressed with that one. Paul declared, “This is brilliant!” (see how I’ve italicised the word ‘brilliant’ there, but left the exclamation mark un-italicised? That’s exactly how he said it).
So I can categorically declare: a good time was had by all. They were probably the two best pub crawls I’ve participated in for a long time, so it was a bonus that they came on consecutive days.
I’m afraid I don’t have any booze porn for you this week, but here’s a picture I found on my camera from the pub crawl on Friday night. I can only assume that’s me silhouetted in there. I probably won’t be able to post again until next week, so until then have fun, and enjoy yer booze. 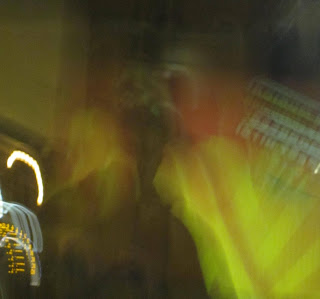