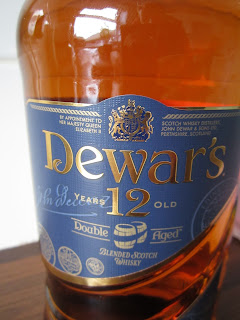 In a slight change to this week’s scheduled post, we have a comparative tasting of two kinds of blended scotch. On the one hand we have Dewar’s 12 year old, “double aged” while on the other it’s Jim McEwan’s Symphony No. 1.

If you’ve been to this blog before, you might be aware that I’ve had the Dewar’s for some time now, having picked up a litre bottle in Duty Free last September. It’s been a bit of a grower. I wouldn’t call it special, but it ain’t bad at all. I’d almost completely finished it, but I decided to hang on to the last dram until I’d procured another blend to compare it with and, thanks to my recent distilgrimage to Islay, I had a contender.

Jim McEwan’s Symphony No 1 was available in the Bruichladdich distillery shop. Jim is Bruichladdich’s master distiller and is highly respected having worked for 38 years at Bowmore from the age of 15 before moving to Bruichladdich in 2001. I’ve mentioned him on this blog before, way back in the beginning when I was professing a liking for the Bruichladdich Rocks expression. He is probably the first individual I ever heard of in the industry, so I was chomping at the bit to find out what this blend, which is comprised of Islay, Speyside, Highland and Lowland malts, was like. It doesn’t say anything about containing grain whisky in the mix, so I’m not sure what that might mean – because it doesn’t say anything about being a blended malt or vatted malt either.

I’ve decided to do things a little differently this time and compare each whisky across a number of categories, just for the sake of variety. In spite of all this, there is only one statistic that really counts, and that is how tasty the whisky is.

The first thing I suppose we should discuss is price. These blends are not equally matched in that respect. The Dewar’s was a Duty Free purchase, and that showed up on my credit card bill at £28.53 for a litre. That’s roughly what you’d be looking to pay in a supermarket for 70cl generally, so it isn’t a cheap blend. I can’t say that it strikes me as much better than your standard Whyte and MacKay Special, but it sure costs about £10+ more.

Jim McEwan’s Symphony no 1 on the other hand comes in at a stunningly wallet-friendly £13 for 70cl. You’ve got to give it a go at that price. In comparison then, you’re getting 5.38cl to the pound with Symphony and only 3.51cl to the pound with the Dewar’s – and that one’s at Duty Free prices.

I suppose that while we’re talking price, we should also talk availability. Dewar’s is pretty widely available but as far as I can tell so far, Symphony is only available from the Bruichladdich distillery shop. So while that would potentially make it more sought after, it means you’re looking at a trip to Islay to get hold of a bottle. Not that you would, but if you did go to Islay for the express purpose of buying a bottle of Symphony No 1, that could potentially increase the cost of your purchase from £13 to… well, let’s take the cost of my trip:

So not including incidental expenses and assuming you live in Manchester, or somewhere £70 in fuel away… you’d be looking at £253. Not such a bargain now, eh? But I’m not going to look at it like that, because my trip was a nice weekend away, and I bought a couple of other bottles anyway – it was more a case of, well, while I’m here, I may as well pick up a bottle of that also…

Since making my purchase, and seeking Symphony out on the internet, I’ve found two auction sites; one where a bottle was sold for £25, and another where the bottle was expected to sell for £75 to £100. Quite astounding, really. It all combines to give Symphony an air of mystique that I hoped it could live up to.

Make your own mind up who wins the availability category. Do you prefer exclusive or readily available? I think it depends. The rarity of Symphony makes me happy because I chose to buy a bottle without knowing anything about it, but if I was you reading this, and I wanted one, I’d find it annoying.

Does it come in a box? Dewar’s does – 1 point. Yes, bottles are cooler than boxes, but it’s going to come in a bottle anyway, and if your booze cupboard is full, a box gives you further storage options.

Which is the cooler shaped bottle? A tough one, this. Neither is particularly special, but I’m going to award the point to Dewar’s for being a bit stubbier and more robust looking.

Screw-top or cork? Dewar’s is a screw top, but Symphony has a cork, and I think as such, is the first blend I’ve ever owned that has a cork. It definitely gets a point for that.

What about the label? I can’t say I’m a massive fan of that Dewar’s label that has like a cutout section. I’m thinking it would be more at home on a bottle of ale. However, the Symphony label is probably the worst I’ve ever seen. It looks like the cover of one of those £1.99 compilation CDs that you get in Tesco or Wilkinsons. Holy shit; who thought that was a good idea? So… I was tempted not to give any points here, but I suppose it will have to go to Dewar’s.

Next we have the very important consideration of alcohol content. Dewar’s is a very standard 40%, nothing remarkable there but, wait a minute, what’s this? Symphony is a groin-stirring 46%! I don’t believe I’ve ever seen a blend greater than 43% before. A quick look on The Whisky Exchange confirms that 40% is far more common, though you do get a few blended malts at 46%. Does this suggest Jim McEwan’s Symphony no 1 is a blended malt? Seems highly unlikely at £13 a bottle, but perhaps that’s a reward for making the trip out to Islay. Let’s hope so. I’d like to mention at this point that I did e-mail Bruichladdich to ask for clarification on this issue, and they haven’t replied as yet. I know they must be very busy.

Strength winner: It has to be the Symphony.

So that brings us to the important stuff. Cost and therefore value for money might have some effect on the overall rating but really, it’s all about how good does the whisky taste?

I’m not going to repeat myself too much in regard to the Dewar’s. It was decent, but the presence of grain was as self evident as any of the cheaper blends I’ve tried so far. I doubt I’d spend £25 on a bottle in future. I won’t shy away from trying some of their other expressions though – the Signature is supposed to be excellent I hear, however at £195 at The Whisky Exchange, it must figure way down my list of priorities.

Mostly then, I intend to talk about Jim McEwan’s Symphony No 1.

Ok, to my relatively inexperienced palate, this is quite a unique blend. I’ve tried all the normal ones and one or two of the more obscure ones, but I haven’t tasted a blend like this before. It’s light, playful and well-balanced. I suspect there is some grain in there, but it isn’t as obvious as I have come to expect.

In terms of nose, I’d say there’s white wine vinegar (but not in a bad way), tobacco, marzipan and citrus, while on the palate it’s quite fruity and suggests there may have been some sherry cask aging in there somewhere. There’s also a herby aroma, but I can’t quite identify which one… could be sage, but I think it will take a bit more tasting to be sure.

This is very easy drinking, in fact, let’s not beat around the bush; it’s superb – and I never considered adding water even for a second. Why ruin it? I want to say things like ‘for a blend this is superb’ and ‘for £13, this is superb’, but no matter what you prefix it with, it is superb – which is good because it’s ‘super’ with an extra ‘b’. I wish I’d picked up another couple of bottles because it’s cheap enough to drink every day – not that I’m allowed to drink everyday, but I probably would, if left to my own devices. It’s better than that though. I doubt I’ll ever get to buy another bottle of this, but it is going straight to the head of a new list called “buy on sight”. It is actually special enough to keep in the cupboard and pull out for a treat. So I think I may have found it; that special blend that it’s easy to love. Nice one, Jim McEwan; you’ve done it again.

That’s me done for this week, then. If you’ve been in the UK for the last couple of weeks you’ll be aware that it has been drinking weather for a good long while now. We are actually having a summer. Remember it because the last one was seven years ago, and it could be that long before the next one. What this means in the short term is that it’s the weekend and there’s no excuse (aside from being skint) for not getting out and enjoying it. Whether it’s drinks in the garden or out in town, it’s time to get your drink on. Sadly I’ll be spending most of tomorrow in a hot venue listening to heavy music at Sound Control’s Summerjam festival. Ah, but what about Sunday? Sunday afternoon will be spent in various beer gardens, exercising my pint muscles. It’s going to be a good one all round. I hope yours is too. Laters.
Posted by Neil Cake at 10:02