More drinking in the shower

Just a quick post this week. I figured it was about time we had an update on one of my favourite pastimes; shower drinking. Sometimes I have a shower even when I don’t need one – just so that I can take a drink in with me*. You can read the original post on this activity here. Now, assuming you’ve done that, let’s bring you right up to date with some pictures and a bit of commentary.

First up you’ve got a glass of St Remy XO brandy at the MacDonald Portal Hotel, near Tarporley, Cheshire. This was after the first round of golf on my second stag do, and you can see there that there was a handy little shelf in the corner that almost seemed like it was designed for this purpose. You can also tell it got pretty steamy in there, but it was entirely because of the hot water.

Much beer, whisky and cigars followed, and it all culminated in me having a bit of a whitey far earlier than I would have liked. It was probably a good thing though, because it meant I was [fairly] compus mentus (considering) for the next day’s round. And I got a birdie, so that was quite thrilling.

Next is a shower-beer from my honeymoon in Ibiza. This is Xavi Alonso on a can of Cruzcampo in the bathroom of our hotel in Santa Eulalia. Nice. I’ve gone for the cubicle corner technique, there.

Back at home now, but this time with the king of bottled beers; Double Maxim. I know I’ve done a post on shower drinking at home before, but I was so excited at having some Double Maxim to take in with me, that I thought it deserved a picture. If you don’t know why I was so excited, see the wedding post from… some time ago.

The shape of the bottle meant it was unsuitable for balancing on the corner, as I had with the Holsten Pils cans, so I just moved the shampoo from the corner shelf, and stuck it in there. Success.

The next two pictures are from Honeymoon Part 2 in Vietnam, about which you should be able to read on these pages in coming weeks. There’s a can of Bia 333, a glass of Glenfarclas 10, and then a bottle of the green variety of Saigon beer. 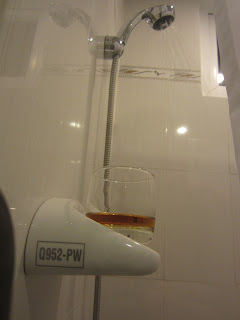 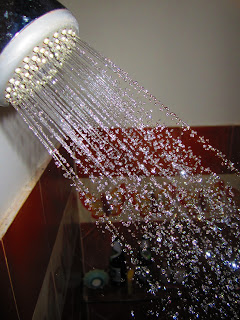 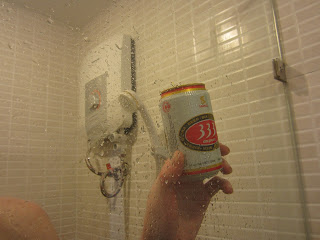 Finally, and bringing you right up to date with a shower drinking episode from my latest adventure, that if you were following me on Twitter, you would have seen was known as Golfageddon. Again, a full account of that will be posted on here at some time in the future. The glass in question here is DYC 10 year old single malt.

That’s it for now, but you can rest assured shower drinking is not a hobby I’ll be giving up any time soon, so I’ll collect a few more and hit you with another post sometime in the future. Don’t forget, I’d be delighted to see your shower drinking triumphs, so tell me about it in the comments. I’ll be back next week with another post that, at the moment is looking like being an investigation into the phenomenon that is the hot toddy. Join me then, but until then, have a great weekend. I know I will – I might open a new bottle.