How DID I select wine?

You might remember that a few weeks ago I posed the eternal question; how does a novice like me go about selecting some decent wine from the myriad of shiny bottles that are all competing for my attention, ooh, let's say, in the supermarket? You know, not that it's for me mind, but perhaps when I'm having guests, and I know they like wine, and I might, for some reason want them to enjoy it?


I'm not sure that last bit needed a question mark, and there's a chance my original question was more concise than that, but it looks to me like I've summed up the whole previous article there - because I didn't offer a solution, I left it up to you. And one of you came to my aid. I say one of you, I mean Clare from the Feast and Glory blog, who isn't so much one of you, as a friend already. Nevertheless, she provided a brief set of guidelines that an idiot like me could take to the supermarket with him. I decided to put them to the test.

Clare and husband Gav were due to visit at the weekend, so not only would I be able to test Clare's hypothesis, but also get feedback on how well I did from my wine svengali or mentor. Hopefully, that would be 'well', and I would have learned some basic information that I could rely on in future. I don't think things are going to change too much in the whole wino-sphere for a good few years, so I figured I'd be sorted.

Now, Clare did tell me that outside of her basic guidelines, the choice she makes when wine shopping ultimately comes down to such fickle things as how she feels on the day and what the weather's like. WTF, yo! How am I supposed to legislate for that? For one thing, I don't know what the weather's going to be like in two days time, and even if I have thought to check the BBC’s weather page and it  turns out to have been correct, I still wouldn't know how that would affect Clare's preferences.

On top of that, I don't know how Clare is going to feel on Saturday, and even if say, she was going to be feeling obstroculous (chances fair to good), she didn't provide any information about what she would choose, come that eventuality.

No, I was going to have to follow the very basic tenets of what she told me. To save you having to go back to the earlier post (though youcan if you want), let me summarise Clare’s advice:

White: anything Sauvignon blanc fom the Marlborough region of New Zealand or any Riesling from the ‘new world’. Alternatively you could go French with a Sancerre or Chablis.

Obviously these are Clare’s preferences, and maybe not for everyone. I didn’t much care because primarily I was buying for Clare, and as far as I’m concerned, if she says it’s ok, then it’s ok.

I made some notes in my book and headed out to Tesco. Hopefully I’d still be able to get something for £5 or under.

Clare had given me a few things to choose from there, but even so, when I took price into account, it meant my options were limited. I couldn’t find any of the Italian contingent within range, but I did grab a Rioja, on offer, at £5 – half price. Result, just a white required then…

Straight to the New Zealand section, and knowing that Clare very strongly favours Sauvignon Blanc, that was what I wanted. The cheapest was this one at £6.20, a bit out of my ideal range. I looked at the Sancerre and Chablis then, and they were all £10 or over. I’m not spending £10 on a single bottle of wine.

Looking at all the possibilities from the new world still seemed a little daunting to me, so we just opted for the New Zealand one at £6.20. That’s £11.20 on wine, then. I couldn’t help wondering whether I might have been better off just getting a cheap bottle of spirits – it would certainly have been better value, but sadly not appropriate for the occasion - or what I actually went in for. In fact, I was so absorbed by the task of buying wine that I forgot to look at the spirits altogether! It was probably for the best.

You know, I get so much enjoyment from buying new bottles of booze that I could almost wish I was enthusiastic about wine. It’s more affordable in general than spirits, so I could treat myself more often without feeling as guilty. Nor would it take as long to finish a bottle, but no, it’s not to be. I’m a spirits and beer man, and beer isn’t that interesting to me anymore, I just like it.

How did we do, then?

In all honesty, it probably couldn’t go wrong because I followed Clare’s instructions to the letter. Having written them down, they are now inscribed on my brain, so I can draw upon that should this kind of eventuality occur again, so that’s good. 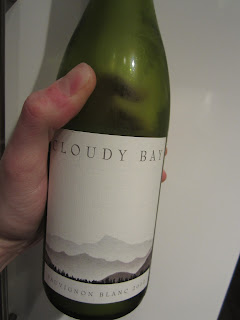 And yes, everyone enjoyed the wine. Gav and Clare arrived between 1 and 2 on Saturday afternoon, and I insisted we crack open some wine before we went out. Clare had bought some Cloudy Bay, which she said normally retails at £20-25. I gasped. There is no way you would find me spending £25 on wine. I could get a decent blended scotch for that! In fact, you can get the Highland Park 12, usually. Outrageous! I’m sorry, but there is no contest when it comes to choosing between a bottle of Highland Park or any wine at the same price.

Anyway, we opened the Cloudy Bay and then indeed, the others. Normally in company, you open a bottle and then drink it till it’s gone, but I figured; why not just open them all? What are we saving them for? Not me!

Sauvignon Blancs have a clean, sharp taste, and seem to be very clear. Yeh, they’re all right. Most of the red was left over, though I don’t think it was due to anyone not liking it, we just didn’t get chance. You’re supposed to drink it within three days according to the bottle, but that didn’t happen either. Instead it was a week later when I was next able to try it, and for some reason I was having trouble swallowing it. I’m afraid I didn’t like it at all.

I decided to make a comparison with one of the bottles that had been left over from our wedding (pictured). That one had been open for some months by this point, but after a single sip I felt it was delicious – yes! Actually delicious. And it was wine. 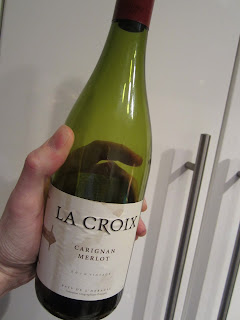 You can see on the picture that it’s a merlot. I remember seeing the trailer for that film Sideways many years ago, and the guy says, “I’m not drinking merlot!” As a result, I once bought a glass of red wine from a pub (Manchester’s Sand Bar), and the barman asked what type. I said, I didn’t know, and he said they’ve got a merlot and something else. I reacted probably too quickly, and said, “not the merlot!”

The way he looked at me suggested he knew I’d seen the trailer. I didn’t get around to watching that film till sometime last year. The fact that it was about wine put me right off. It actually isn’t all that bad, but it would be better if it were about a whisky tour.

Sadly Clare wasn’t around to be able to do a comparison with our merlot, though she probably had some at the wedding. I’d be surprised if she could remember whether she liked it though. I think she said nice things about it at the time. It was her advice that prompted us to ensure that one of the wines we provided to our guests was a Sauvignon Blanc.

So I think the lesson to be learned here is that recommendations and guidance are all very well, but everyone has their own preferences, and if you’re bothered enough, you’re just going to have to take a little bit more of an interest and find out what your preferences are – make a note of what country and region the next wine you enjoy is from, and what grape variety it is. Encouraging you to get into wine is the last of my intentions, but it’s up to you after all. I’m not drinking my share of the wine, so I suppose someone should.

So in conclusion, would I have been happier spending £12 on a cheap bottle of spirits? Absolutely, but what would I have written about then - how I was going to buy wine but didn’t? I suppose I could have done another Budget Brands post, try that Tesco own brand scotch or something. Still, that leaves me something to do in the future. Keep an eye out for that one.

That's it for this week. Sorry it was late, but thanks for reading. I'll be attending another poker night this evening, so I'm particularly looking forward to opening a couple of new special bottles. No doubt I'll tell you more about that at some time in the future. Enjoy your weekend now, y'hear?
Posted by Neil Cake at 04:37