One Friday night in the not so distant past, I thought it might be nice to conduct a tasting of all the whiskies I then had available, and now it’s time to give you an overview of the method and results.

Due to a number of consecutive breakages I only had one of the glasses left that I have taken to drinking whisky out of, so I had to adapt my practices for this experiment, and got out five of these almost spherical rocks glasses. I know they’re not ideal, but they’re not that bad at holding aromas. The main problem is that they are slightly too large to hold comfortably, and slightly too heavy.

I poured [slightly more than] a little dribble of a different whisky into each glass and carried them through to the living room, where Mrs Cake immediately voiced her displeasure at seeing so much whisky queuing up for tasting in one go – as if this is something I do all the time. No; this was the first time – and it was the weekend. It doesn’t mean I won’t do it again when I have 5 other different whiskies to taste, but actually, the last time I did anything even slightly like this was probably around a year ago when I had 3 bottles of vodka in all at the same time. So cool yer boots, missy!

To be fair, she kind of had a point; it did turn out that there was far more whisky there than I had anticipated. There’s got to be enough to get a good taste though, hasn’t there?

The first thing I learned – and probably the most useful thing – was that in terms of analysis, I believe I got more value by tasting multiple whiskies at once in whatever order I fancied, than I usually get by just drinking one after the other, one at a time. I found that the differences in nose and on the palate helped me to ascertain and analyse what those differences were – because each whisky gives some kind of reference point by which to judge the others. I haven’t seen any whisky experts explicitly recommend this method before, so maybe it’s not the done thing, but as your attorney, I recommend you try this next time you have a chance. If you just drink one after the other, you can only compare each to the last, but if you mix and match, you can build up a complex comparative picture – this one is peatier than that one, but not than that one, this one is fruitier, this is oilier etc, etc…

So; down to the nitty-gritty then.

Being aware that generally you should taste Islay malts last as they have more [let’s say] aggressive flavours that can linger on the palate and affect your judgement of succeeding whiskies, I decided to let the Caol Ila sit it out, untouched at the end of the queue until all the other glasses had been drained – as a kind of treat to round off the experiment. Would it be a case of save the best till last? 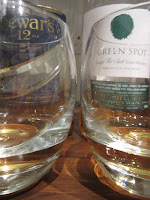 I didn’t add water to any of these, since I figured at 40 and 43%, none were really strong enough to warrant watering down. Certain whiskies supposedly develop with water, but not only have I never had that particular experience myself (I can always taste the water - except when drinking cask strength bottlings), it would also have made the comparison harder to conduct in just this one sitting.

The most interesting thing, other than my tasting experience being enhanced by tasting numerous whiskies at once, was that for the first time ever I was able to pick out different component aromas and flavours from some of the samples. Not that many, to be brutally honest, but some, and some is an improvement on none, and demonstrates a development in my tasting faculties.

In the Balvenie for example, I noticed a very hoppy aroma – like when you walk past a pub first thing on a Sunday morning. In contrast, Green Spot, was very fruity in the nose. Balvenie, as I said in my recent On the Nice List post, really reveals its complexities and shows its worth when compared alongside other whiskies – as, it turns out, does Green Spot. So again, both did quite well here. I’ve yet to derive much enjoyment from this expression of Balvenie on its own (unlike Green Spot), but perhaps that will come with time (bear with me and watch this space…) 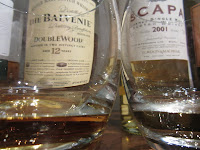 I provisionally ranked the contestants for fragrance – just out of interest really – but unfortunately I made my notes on an old envelope that has since been lost. All I remember is that surprisingly the Scapa came out as least fragrant and the Caol Ila as most but, you know, Caol Ila literally jumps out of the glass - and then tries to smother you (in a good way, of course, like a lovely bosom let’s say).

On the palate, as real whisky aficionados say, all the whiskies performed well. I didn’t think it would be fair to say this blend is inferior to that single malt when the samples were drawn from a number of different ages, regions and styles, so I decided early on that there would be no overall winners and losers. If you’re satisfied with them all, let’s leave it at that.

I would like to say though, that the Dewar’s measured up nicely alongside some renowned and some expensive whiskies. It was probably the least complex and classy of those on offer… but it was the only blend, and the cheapest (though not particularly cheap for a blend). If the test had comprised more blends at or below the Dewar’s end of the price spectrum, I have a feeling it might have fared very well – though I suppose that remains to be seen, and would depend on which other blends they were!

If there was any disappointment at all, it was that Scapa didn’t distinguish itself as much as I thought it might. I consider it to be a well balanced whisky, but it paled in comparison to the others – no unpleasant flavours, but no outstanding pleasant ones either. 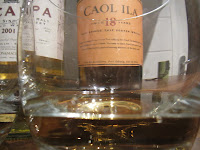 Similarly, Caol Ila’s 18 year old – while still an enjoyable malt – didn’t go on to outperform the others as I had expected (and secretly hoped) it would. At this stage it is looking like the 12 year old expression is superior, and far superior value at half the price of its older, sweeter tasting brother.

To be fair, most of these bottles still have a long way to go I’m sure, before they have finished revealing their mysteries to me. As ever, I’ll let you know if I have any other particularly interesting impressions as I go along. The tasting proved to be a fun way to spend a Friday night at home, as well as a satisfying one. Let’s hope I have occasion to do it again soon(ish).

Before I go, I suppose I should give you a bit of a heads-up as to what’s to come in the short term. I’ll have a post for you next Friday as usual, but after that I’ll be on holiday for a couple of weeks, so it will be complete radio silence I’m afraid.  I’ll try to get a post up on 19 April, but no guarantees at this point.

The missus and I are actually going on what we are calling “Honeymoon Part 2”, to Vietnam. Hopefully that will give me plenty of things to write future posts about. I’m particularly looking forward to getting hold of some Mekong Whisky, and hoping to find some decent Japanese malts in the Duty Free. If not… I’m sure I’ll find something in the Duty Free… I figured also that I’d pick something up at Manchester Airport on the way out, so that I’ve got something to accompany me for the duration. I’m looking forward to that, too!

Then there’s  all the other things that there are to look forward to, but they’re not relevant to this blog, so I’ll leave it here. For now, have yourself a great weekend, and see you next week.