As part of last year’s Christmas festivities, Mrs Cake decided to elevate her festive enthusiasm to new heights by creating an advent calendar for me. It wasn’t two bits of card with flaps concealing uninspiring chocolate in the shape of generic yuletide objects though, it was five carrier bags of presents that represented a treat a day – small things mostly; there were at least three Mars bars and Dairy Milks on separate days, but there was also a pack of cookies, a bag of Opal Fruits, chocolate money, Twiglets, Brannigans crisps, and… five individually wrapped beers. 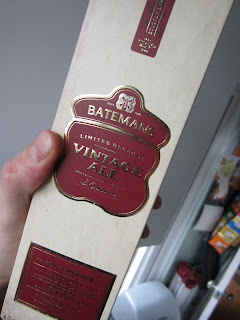 Don’t get too excited, they were all from Aldi, and some bore the legend, “bottled exclusively for Aldi”, but cast your snobbery aside. They were all nice, and Mrs Cake tells me, only £1 each (with one exception). These were of the premium beer variety, so in Tesco you’d be paying at least double for something similar to these.

The most interesting of the beers though, was this one; Bateman’s Premium Vintage Ale. This one was so special that it came in its own box – which led to some confusion at first, since I accidentally found it in the ‘calendar’ too early. “No!” cried Mrs Cake.

“That’ll be a pretty special beer if it comes in a box!” I exclaimed, while actually thinking it must be a small bottle of whisky. I didn’t want her to know I knew, and secretly made sure it was the right way up so that the cork wouldn’t damage the bottle’s contents.

So when 24 December came and it was finally time to open it, it turned out that it had been a beer in a box all along. I wasn’t disappointed though, as Mrs Cake had already put her proper presents under the tree, and one was definitely a bottle of whisky.

Also, I don’t think I’d seen a beer in a box before, and this one said, “limited release – Vintage Ale”. In fact, it was even numbered (out of 5000), though I didn’t make a note of what number it was – it was too high to be of any interest to me.

Vintage ale – I don’t think I’d heard that term before. It suggests it’s old, a supposition that was to some extent reinforced by the information on the box, which included a rather charming story about some cases of barley wine (strong beer) being forgotten about for thirty odd years, then discovered and found to be delicious. 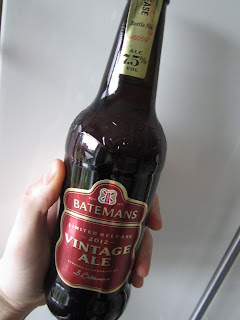 Exciting stuff until you read on and discover that the bottle you’re holding isn’t one of those. It is inspired by the discovery of those cases. There’s no information on Bateman’s website, and the information on the box was incomplete, but this blog fills in the gaps. It seems the brewers attempted to recreate the old brew, and aged it in oak casks for a comparatively brief seven months. It all ends with your favourite grocery store and mine, Aldi, being pleased to distribute them. They still had some in stock at £3.29 a bottle for some time after Christmas, but sadly I’ve been too slow getting this post out, and by now I’m fairly sure they’re all gone.

The word ‘vintage’, I have since found out, doesn’t necessarily mean ‘old’. The term actually relates to the year in question, so you could easily have a 2013 vintage – that would be a beer made using malt and hops from this year of our lord 2013.

Stuart Bateman, the MD of Batemans reckons this is the best beer he’s ever tasted but, you know, he probably would. What do I think of it? Well, I’m no expert on beer, though I have been known to dabble with them from time to time, and er… well, I’ll tell you in a minute.

My friend Paul is a bit more enthusiastic about real ale than I am, so I thought he might appreciate the chance to partake in the tasting. I took it along therefore, to his house and we poured it into two glasses.

It’s a satisfyingly strong 7.5% ABV, so it gets points for that straight away, but what can I say other than it tasted like a strong British ale? Sure, it was nice, but the best beer I’ve ever tasted? No. I don’t remember it being that good. Yeah, I’d already had a few drinks, and was no doubt slightly distracted, chatting with Paul and Victoria and the wife, but if it was the best beer I’d ever tasted, I would still have noticed. I don’t think Paul was particularly taken aback either, but I’ve quizzed him since and while he doesn’t remember much specifically, he’s was quite positive about it.

I was a little perturbed by the incomplete nature of the information on the packaging, which made me sceptical as to the overall quality. Alcohol brands are full of impressive sounding boasts that on closer inspection are hard to validate, or not that impressive after all, so you’ll have to excuse me for being a little cynical.

It was still interesting to try though, and I couldn’t say at the time whether I’d tried any ‘aged’ ales before, though I’ve since learned that cask ales can often be aged for from as little as a few months to around a year, helping them to develop fully. There is still yeast in the cask or bottle with real ale, and this enables the brew to undergo a further fermentation process, so in theory the ale can get better and better, as long as you don’t open it and begin the dreaded oxidisation process.

I have had a fair amount of real ale in the past, though I don’t remember ever learning how long any particular beer had been maturing – I’m sure many will have been a good few months old nevertheless.

As someone who finds aged liquor fascinating (just the thought of it sitting there in barrels for years – or months in this case – is interesting to me), I was intrigued by what this bottle would reveal. In conclusion though, it tasted like many other ales I’ve tried previously, so perhaps the only question is why hadn’t I heard of vintage ale before? As I say, I’ve drunk a lot of beer over the years and been to a fair few real ale festivals – I shouldn’t have to actively research this stuff in order to find out about it.

Don’t get me wrong here, it was a nice beer. It’s just that my excitement at the prospect of something I thought was quite unique faded when I realised firstly that the story on the box was only part of the story, and secondly that this would not be the first time I had ever experienced ‘vintage’ ale. Seems it’s just about how it is packaged and presented.

This blog sure is turning out to be educational (for me). I expect a good number of people who happen across it already know a lot of this stuff anyway, but thanks for stopping by! I hope you will do so again. Next week I’m planning to reveal the results of a tasting of five whiskies that I did recently - it is subject to change depending on how I feel about it at the time, but come by anyway. I’ll try to make it interesting.

I’ll be indulging in more drink-related activities this weekend as usual. I’m looking forward to this evening in particular because I plan to polish off my bottle of Bladnoch 10 year old, and I’ve told myself that once that’s gone I’ll allow myself to open a new bottle. I’ve decided to make it a blend because I have a bit of the Dewars 12 year old double aged left in my hip flask, and I’ll be able to do a comparative study. That should probably be “study”. The blend in question is one that I picked up on my recent distilgrimage to Islay, but I won’t mention it now because I want to save the details for my travelogue (“travelogue”) that should be coming up in a few weeks. Opening a new bottle is one of my favourite things. I am such a geek.

You make sure you have a good weekend now, ok? See you soon.
Posted by Neil Cake at 12:49