Christmas is long past now, but a few things came out of the period that I wanted to talk about, so before it becomes even more irrelevant than it already is, here’s one of them.

One of the best things about Christmas for the booze-hound, is the prospect of receiving a new bottle that you didn’t have to buy yourself – i.e a gift. My friend John is in the enviable position of doling out projects to building contractors, and as such can expect several bottles of whisky from them each year. I’m sure there’s nothing dodgy about that at all.

While I’m not so blessed as to be the director of a large government funded organisation, I’m usually quite lucky at Christmas time, and tend to end up with two or three bottles once Father Christmas has been - and the magic lube that enables him to insert himself in your chimney - even when you haven’t got one, but instead have a gas fire… has settled. I must be on the nice list, though I can’t think why…

This year was no exception. Father Christmas obviously didn’t mind that I drank the bottle of Sol that had been left out for him by my brother-in-law and young nephews, because he still brought me a bottle of the Balvenie 12 year old, ‘double wood’ (40% ABV), and a Gordon and MacPhail bottling of Scapa (2001, 43% ABV). It was an honest mistake on my part; I thought the beer had been left out for me. I was a little suspicious as to why there was a cookie and a carrot there, but I didn’t want those, so I left them. Here’s some information and first impressions then of both my new distilled brethren.

Balvenie first: Father Christmas had brought me a bottle of this before, several years ago and I remember not being all that impressed. I was glad of a chance to try again though, since back then I was still taking my scotch with ice, so I couldn’t really have had any idea of what it is really like. I’m not being a snob; that’s just a fact. Given my first impression though, it meant I was unlikely to ever buy myself a bottle – short of seeing an absolute bargain. So a gift is just the ticket! You should be able to find this for around 30 quid. The Signature Edition is supposed to be better, by the way, and that’s about £5 more.

As I say, it’s 12 years old, aged for most of that time in ‘whisky’ barrels (no further information about those specified), and then finished for a few months in sherry casks. It’s a nice dark colour, and comes in a satisfyingly chunky bottle.

I’ve had a couple of tries of it by now, and I’m still undecided. The first taste was on our return home from Christmas with the family, and I’m thinking my taste buds must have been fried because I couldn’t taste anything. It was weird – it didn’t even taste like whisky, no matter how long I held it in my mouth and chewed it.

Then there was another unremarkable tasting before I took the bottle to our friends’ house for a takeaway night. Paul had bottles of Famous Grouse and Glenmorangie in already, so we each had a tasting of the three whiskies, side by side. We took a look at them first, before tasting them blindly.

I don’t think I’ve ever bought a bottle of The Famous Grouse, but Paul says it’s the only brand his dad will drink, so if anyone ever buys him anything else for Christmas, he just gives it away. I have had it, mind; it’s like the standard one that you get in miniatures on airlines.

In comparison to the Balvenie, the Glenmorangie and Famous Grouse were similarly pale, and in terms of taste, both were bland and watery. Paul and I both identified these two the wrong way round, but there wasn’t much to choose between them, and I think we assumed the better tasting one must be Glenmorangie, when it actually wasn’t. Their insipidness made the Balvenie seem complex and rich in comparison. We couldn’t be sure though, whether the Glenmorangie had been compromised in some way by sitting in Paul’s dad’s cupboard – perhaps on its side for some time, since Paul told me the cork had atrophied, and he had sealed it with one of those wine stoppers, but it didn’t fit properly. 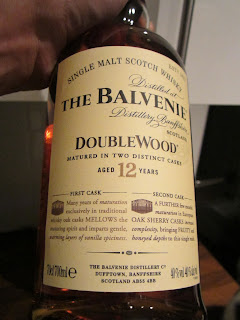 As far as the Balvenie was concerned, this was encouraging and made me look forward to trying it again in more peaceful and serene circumstances. As ever, further tastings await, but I have decided the next one will be a full comparative test with all the other whiskies I currently have at my disposal – 5 in all (which seemed a lot until I met Andy from Manchester Whisky Club – 44!), but I’m looking forward to that tasting nevertheless. You’ll be able to read about how that went sooner rather than later – maybe next week, maybe the week after – so keep coming back.

The other bottle then, was the Gordon and MacPhail bottling of Scapa. Mrs Cake tells me that this one was recommended to Father Christmas by the people at the Reserve wine shop in West Didsbury, and you should be able to pick it up for around £35. 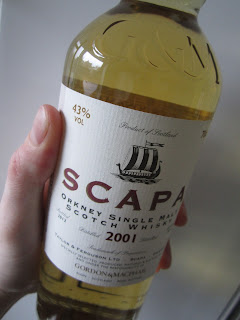 Gordon and MacPhail are merchants, and the way that works, is that merchants buy quantities of new make whisky direct from the distillery, then it can be aged either at the distillery, or by the merchant, in their own barrels. Presumably the merchant then decides how long it is aged for, and in what kind of barrels. I’m unclear at this point, as to whether they then blend different barrels of the spirit to achieve the desired effect, or whether all the contents come from the same barrel. It probably depends. Lots to learn. 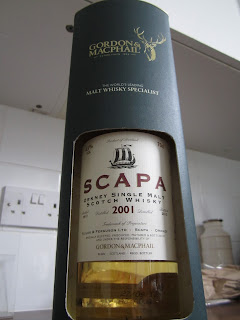 So this particular bottle is from Orkney’s Scapa distillery. It was distilled in 2001, and bottled in 2012, so that could potentially have been aged for between 11 and 12 years, depending on exact dates (I don’t think I’ve ever heard of an 11 year old whisky…). How strictly do they stick to dates? Do they age for exactly 12 years, or do they just go with roughly 12 years? They probably blend from a variety to get it tasting right. The rule, after all, is that the age statement has to correspond with the youngest whisky that was used, so some will be 12 years and 2 months, some maybe even a year or more older than the statement. When the bottle states ‘distilled in 2001, bottled in 2012’ though, you can be sure there’s going to be nothing older in it.

Scapa is a er… pale yellowy colour, but it’s presented quite nicely. The fancy box it comes in has two gaping holes in it, so that you can see the labels on the front and back of the bottle. That’s all very well, but I presume that cancels out the practical considerations of a whisky box, which are to protect it from sunlight, should you not have room in your cupboard. I don’t think it’s important anyway. Supposedly if you leave whisky in direct sunlight it can turn cloudy, though this effect isn’t irreversible. It probably doesn’t matter if it’s chill filtered, and I suspect that since this is bottled at 43% ABV, it probably is chill filtered. It would probably say if it wasn’t, since that’s considered a good thing among enthusiasts.

Only one tasting of this whisky has taken place so far, this time at the home of some other friends (Phil and Laura), where we spent New Year’s Eve, drinking, eating, and dancing around like idiots – not even noticing midnight, when it came around. Not much to report then as yet, but I was suitably impressed – it seems like a classy whisky to me, though certainly not as interesting as the Lagavulin 16 that I’d given Phil for his birthday.  Let’s hope my fondness for the Scapa develops and deepens in the weeks to come.

That’s it for now, but don’t worry if you feel like you’ve been left hanging a little there; I do have plans to update you on impressions from future tastings, and there have been developments, they will just be part of a whole host of different posts dealing with my various experiences in alcothusiasm, rather than in any dedicated review of a single bottle. It is, after all, a blog, not an encyclopaedia or review compendium. And I ain’t no expert either way. Just sharing a bit of the love.

Before I go, I did have a whole weekend related newsletter for you, but since I didn’t get to post this before the weekend, it’s all irrelevant, so never mind. Instead, I hope your working week isn’t too painful. Join me back here on Friday evening for another post. Until then, remember you can follow me on Twitter, @alcothusiast.
Posted by Neil Cake at 11:10