Following the Friday night on which I did a comparative tasting of my 5 whiskies, I decided on the Saturday to do something similar with the two grappas that I had in. You’ve met one of them before – Grappa Julia Superiore(38% ABV) – here and here, but the other was a new acquisition that I haven’t told you about yet – Domenis Blanc e Neri (40% ABV), that I picked up from Carrington’s in Didsbury. 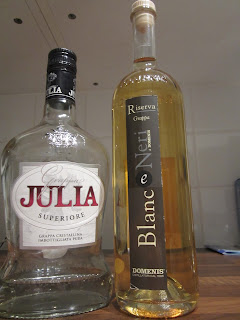 It was two days before Christmas, and we were over that end of town getting some supplies, and putting together a Christmas hamper for some very good friends of ours. I decided it would be a good opportunity to invest in a new bottle of grappa.

They only had two in stock, which I have to admit surprised and disappointed me somewhat, since it suggests I may have to order online in future. One was the Domenis Storica that is already a favourite of mine (that you can read a little about here and here), so I had to go for the other – Blanc e Neri. It was a couple of pounds cheaper than the Storica, and the bottle was 20ml bigger. This would also prove to be the first aged grappa I’d bought (not including the one I got long ago from Vom Fass, because I can’t remember any details about that one…), at 18 months. Considering it is aged and there’s more of it, I don’t know why it works out to be less expensive than the Storica – hopefully it’s not because it’s not as good, but rather is reflective of the staggering 10% difference in ABV – Storica being a heroic 50%. 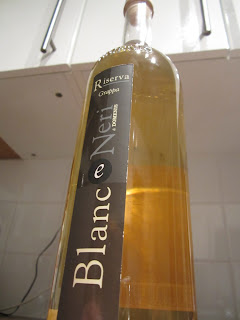 I don’t know whether it was just because it was Christmas, or maybe people don’t often spend around £50 for a bottle of grappa for themselves, but the lady in Carrington’s seemed to assume I was making this purchase as a gift, but no; it was for me – I seriously don’t actually know anyone else who likes grappa. The same thing happened when I went in there to buy my El Jimador tequila. I don’t think I mentioned it in my earlier post on that, but the same lady assumed I was buying it to share with friends. No, I said, It’s for me – well; I might let some friends try it… but mostly it was for me. And if it was to be shared with friends, it was only so they could see how interesting and refined I am.

In the picture there, you can see the two grappas in their glasses. Obviously there’s some difference there, with the Domenis Blanc e Nero having taken on a luscious golden colour, while Julia – as standard - is translucent. And so, on to the nosing and tasting…

Now, in my Budget Brands: Tesco Grappa post, I admitted to being quite impressed with Grappa Julia Superiore. It remains the only grappa I’ve ever seen in a UK supermarket, and at £13 a bottle it’s a fraction of the cost you’d pay for other grappas. The only disappointment is the unremarkable and discouraging 38% ABV. 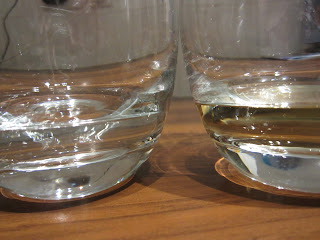 However, when compared side by side with a more premium brand, Julia’s failings are all too apparent – because this Domenis Blanc e Neri is an absolute de-light. Really; some of the flavours I was getting from this glass brought to mind a very classy single malt whisky, of the kind that has been finished in a sherry cask. It was sweet but not too sweet, a little salty, with a very nice tongue burn, and only a little bitter on the finish. Very classy indeed. I’m only an enthusiastic novice, but I feel pretty confident when I say that. Just thinking about it now makes me want another glass, and in fact, of all the spirits I have at the time of writing, this is probably now my favourite. I can taste it right now, just thinking about it. And you know; I like whisky, and keep several in stock, so that my favourite spirit from my cupboard isn’t on of them: that’s saying something.

My original intention when buying grappas was to just get the cheapest available, and while this was the cheapest available, it is already entering the premium spirits category as far as I’m concerned (shall we set the threshold at £50 for now?), so I guess that puts that idea to rest. I can see that The Whisky Exchange has a few more varieties for less than £30, but at least five of them are the same brand as each other, just based on different grape varieties, so that’s not necessarily ideal.

In conclusion then, let’s not take anything away from Julia. If you want a bottle of grappa without much outlay, and you’ve got a decent sized Tesco nearby, it is going to do the job – as long as you don’t try it alongside something special. That’s pretty good. If, on the other hand, you’ve got £50 spare, and you can justify spending it on some fancy booze for yourself, I find it hard to believe you could be disappointed with Domenis Blanc e Neri. I think the bitterness on the finish does put it slightly behind the Storica in terms of overall quality, but it has enough going for it to earn a hearty recommendation from me.

Grappa is a criminally underrated spirit, here in the UK. I think it’s about time you made the effort and gave it a go. You listening? I’m going to make it my mission to put grappa on the UK map. I don’t know how – perhaps by mentioning it a lot – but hopefully we can get some more brands in supermarkets before too long. Is that a bad thing, mind? All the specialist off licenses are already going out of business round here, so maybe we shouldn’t be neglecting them in favour of the convenience of evil multinational supermarkets (not naming any names). Yeah! Nevertheless, get out there and get some frickin grappa.

Blimey, I almost forgot my weekly update! So, I'm afraid that will be all you'll hear from me for about 3 weeks because the missus and I are off to Vietnam. I'm definitely looking forward to picking up some duty free and seeking out some Mekong Whisky, so there should be plenty to tell you about when I get back. Try not to miss me too much. I'll try to tweet from time to time, so you can try following me there, if you like.

Ok, keep your lives booze-fuelled, and I'll see you when I get back. That is all.
Posted by Neil Cake at 05:17