What is it with whisky reviews? Part 2: Colour Classification

In a previous post I got all carried away with the phenomenon of whisky reviews; and by that I mean the way people dissect the flavour and scent of whisky and separate it into constituent parts – vanilla, cloves, red berries etc. If you didn’t see that post, you can have a shuffty here (it was only last week), or if you can’t be bothered with that, here’s a particularly evocative example from the Caol Ila website.

CAOL ILA 18 YEAR OLD
Age introduces a golden colour and complexity to this mellow, amber Caol Ila. It starts smoky-sweet on the nose then drinks smoothly, showing a sweet yet sour character. The long-lived finish evokes a distant, smouldering beach bonfire.
NOSE
Smoky bonfires, then soapy water and wet wool, with a smouldering beach bonfire in the distance. Hints of mineral oil, then wax. Develops scents of burnt pork sausages.
That one’s not actually that bad; it keeps the flavours listed to a minimum, and instead goes for more of a description, but still; you can see the sort of thing I’m getting at.

When I was writing the post, I was also ensconced in a book that you may have seen me make mention of a good few times already: Ian Buxton’s 101 Whiskies to Try Before You Die. I remarked on how his reviews classify the colour of the whisky as well as the scents and flavours. So I thought it would be nice to follow up What is it with whisky reviews? by delving a little deeper into that.

I am well aware, as I’m sure you are, that the colour of whisky can vary quite widely (within certain parameters – I mean, it’s never going to be green, is it?). What confuses me is how someone could look at one whisky, and say ‘that’s golden amber’, then look at another one and say, ‘that’s amber gold’. 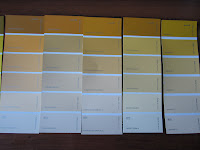 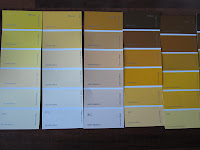 Sure, the colour of some whiskies differ greatly from others, but it is also true that some are quite similarly coloured. ‘How does he do it?’ I asked myself. “Does he have a Dulux colour chart or what?” 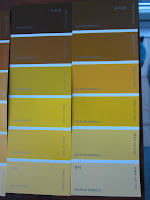 And thusly was an idea born. The next time I had a reason to go to B&Q (purchasing a blueberry bush for my sister’s housewarming present), I stopped by the paint aisle and collected all the colour cards that might represent the colour of whisky. These aren’t standard Dulux colours that you can buy in tins, but the ones you can have the staff mix up for you, and there were quite a serious number that might correspond to the colour of whisky. I ended up collecting 17 cards. Some were classed as yellows and some as reds. Oddly, the ones that were classed as gold weren’t anywhere near the colour of whisky. I say oddly because Buxton’s book has a good number of the whiskies classed as some form of gold or other. I stashed the cards in the pouch of my hoody, and took them home where they now sit in my booze cupboard awaiting any occasion I pour a glass of whisky.

I’ve never really found those B&Q colour swatches useful. Just as I find it impossible to taste a drink and say, “this tastes of cloves, fresh mown grass and mussels”, I have an inability to look at a 6.1 x 2.8cm block of colour and apply it mentally to a whole room. In addition to that, I’d contend that the paint looks a different colour on your walls than it does on the sample.

Nevertheless, I thought it would be fun to apply an actual guide to help with classification. If I can also determine what the Dulux classification is for some whiskies that appear in the book; that will be great – of course it will ultimately be pointless, but nevertheless great. And maybe one day I can paint a room the same colour as one of my favourite whiskies, and maybe that will be all relaxing, and when I drink a glass of that whisky, I might feel like I’m swimming in it.

Actually, a few years ago, [I think it was] B&Q [who] ran an advertising campaign, the gist of which was that if you found a colour you wanted, you could take a sample of it, and they would mix up a paint of that colour for you. In one such advert, a woman liked the colour of a man’s hoody, and cut a chunk off of it with a pair of scissors. By that token, how cool would it be to take a bottle of whisky into B&Q, pour a glass, and say, “I want a paint in this colour”?

Now, in case you don’t already know, the recommended practice for appraising colour is to pour a glass, and then gaze at it against a white background. Until I read the 101 whiskies book, I hadn’t realised the point was that you could then try to decide what colour it was. I thought it was just so you could go, “that looks nice”. It always looks nice.

My first experiment was with the Dewar’s 12 Years Old, double aged that I picked up in Ibiza Airport’s Duty Free shop. I saw the other week that you can get 70cl in Sainsburys for the same price that I paid for a litre there. That seems to be how Duty Free works, in the main; 30cl extra free. It’s just a shame that sometimes you don’t want the extra. I’ll be a little more careful in Duty Free next time.

I poured a generous glass, held it up to my kitchen cupboard and cycled through my various colour cards, attempting to see which one matched most closely.

I was initially a little sceptical that I would find any exact match, but I think I did fairly well. I may not be quite on the money, but I think its close enough. Take a look at the picture, and see for yourself. So Dewar’s 12 Years Old, Double Aged is Golden Bark 3. I can’t compare this one to the Dewar’s in the book, because I got the wrong Dewar’s. The one in the book is “Special Reserve”. Oh well.

While I’m on it, I may as well give you a brief first impression of the Double Aged Dewar’s; I was impressed at first. You know that I don’t know how to describe flavours, but my first reaction was, “oh yes, that’s a classy taste”, but then the familiar blended scotch taste took over (must be the grain), and each succeeding sip was an attempt to repeat the experience of the first sip – mostly unsuccessfully. It seems I had become desensitised to it already. If that’s the way it stays, it looks like being a frustrating whisky. Time will tell. And then it will probably tell all over again. Litre frickin’ bottle, I don’t know.

I moved on, and was able to try a swatch test with my bottle of Grants’ just before I finished it. It’s a good deal lighter in colour than the Dewar’s, and came out as Sulphur Springs 3, as you can see. At that point I decided I’d try a few more before publishing my findings. Here they are in order of experiment:

I couldn’t find a match for this one, but that’s ok as I didn’t get brandy coloured colour swatches. I thought I might find a match though, as in the bottle it looks a lot like whisky. In the glass it actually has a much more red tint than the whiskies I’ve tried so far.

No match this time, either. Ian Buxton describes it as amber, but I’m afraid I couldn’t get anything even near to it from Dulux. Interestingly, the St Remy XO brandy that Brenda brought me back from Paris is described on the St Remy website as amber in colour, and Caol Ila is described as amber in the example at the beginning of this post, yet there is a world of difference between these three.

This time I had another success, and with another blended scotch. The Black Grouse came out as Earth Glaze 3. It’s always ‘3’ it seems, so far. I don’t know what an earth glaze is – I would have expected that to be more of a brown, but there you go.

Finally, the testing has proved to be quite fun, so I’ll keep it up for as long as it continues to be so. I’m not sure yet whether that will mean another specific post, or whether I’ll just throw a result into any article where I happen to mention a new whisky. So we’ll see.

Mrs Cake thinks I’m doing this just to facilitate my growing obsession with whisky, but I continue to protest that I’m just being silly, and that it is entirely for fun. Which it is really. Anyway, it’s her fault: she bought me the 101 Whiskies book in the first place.

That's it from me for this week, then. I expect I'll be back next Friday with something else. Have a great weekend, and here's hoping for some fun alcohol fueled adventures to write about in the near future.
Posted by Neil Cake at 04:51