New things to do in 2013... Manchester Whisky Club

Happy Friday everybody! And happy birthday to Clare at the Feast and Glory blog. I’m sure she’ll be indulging in some gourmet food and copious quantities of sauvignon blanc this evening, and why the hell not?

It’s just a quick post from me this week, but next week I’ll be back with something a little meatier. Here we go.

My friend David and I joined the Manchester Whisky Club recently, which is a new initiative to bring whisky enthusiasts (like me and my friend David) together… to what end I’m not entirely sure just yet, but I expect there will be some drunkenness, some laughs and plenty of tastings. 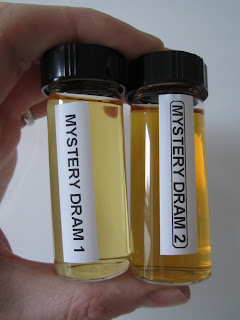 Membership is £15 per year, for which you receive a membership pack (including membership card – oooh!) and two “sample drams” for a ‘twitter tasting’ to be held shortly so that might see Dihuli getting its own Twitter account – watch this space.

With the Twitter tasting being a good few weeks away when I received my samples, I obviously couldn't resist at least opening them up to have a sniff. I'm looking forward now to actually trying them.

Membership numbers are strictly limited, so it may already be too late for you to join. Nevertheless, meetings are to be held monthly at the Lass o’ Gowrie pub, though you can’t attend unless you’re a member. Visit the club website for details of how you can join.

The first ever actual meeting is to be held in January, and details of future meetings are already up on the site. There is an additional charge of £12 to £25 for each meeting, depending upon what is being tasted. It looks good, and it isn’t run for profit, so you can be fairly sure that the price you’re paying is fair. A good night out costs £30-£50 these days (and that’s a conservative estimate), so if I can get nicely drunk at these meetings, it will be a bargain.

The club is run by Andy, who I haven’t met face to face yet, but I have been in touch quite a few times on the e-mail, and he seems like a good guy. I’m certainly looking forward to the first event, and the possibility of some future adventures to write about on this blog.

I’m particularly interested to see what the other members are like, and for some reason I suspect that David and I will be the youngest. I wonder also whether there will be any women there… not that I’m looking to meet any, but probably not.

Well, that’s it for this week. I don’t have any major drink-related plans this weekend, but I will hopefully be dipping into a few of my special spirits, plus there’s a new bottle of budget vermouth to open, so I’m looking forward to that.

I think the missus and I are going to a ‘decorating party’ on Saturday, helping some friends to strip their walls. They promised beer and food, and since I’ve never been to anything like that before, I’m hoping it literally means drinking beer and stripping walls at the same time, rather than doing the work and having the reward later. We shall see!

Sunday of course brings the big match, Manchester United vs Liverpool, so I’ll be going to John’s house to watch that. We’re all Liverpool fans by the way, but don’t let that prejudice you against us.

Whatever you’re doing this weekend, do it well eh? I’ll see you next week.
Posted by Neil Cake at 10:27