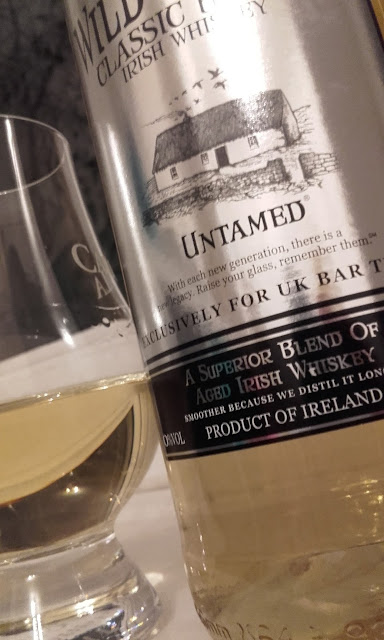 I was trying not to spend all my booze budget this month, but couldn’t resist a little look at Bring a Bottle anyway. What I came across was this; Wild Geese blended Irish whiskey. It’s 40%, and with P&P it was £24.52 at The Drink Shop. The clincher was that this was for a 70cl bottle while all the other online suppliers were selling a 50cl bottle for around £23, so it seemed like a good deal. I have to say though, I was surprised when it arrived, to find that it is presented in an uninteresting, standard shaped bottle, when I was expecting something morein the Bruichladdich mould. I haven’t found any information online as yet, but it looks once again like there may have been a rebranding (though not a particularly drastic one) or even a product change.
Well, I can’t comment on all of that, not without definite information, so let’s just find out what this bottle is like, on its own merits.
Sadly I’ve made very few notes on this, but I can tell you that I enjoyed it. I drank it early in the evening in general, but it was also one that I chose when I didn’t want to be stuck making a decision for a long time – so a go-to, if you will. The go-to is an important role. For me it generally has to be good value (to assuage feelings of guilt) and reliably pleasing (to make it worthwhile drinking at the expense of something else). And Wild Geese performed that role well – like an efficient holding midfielder in a robust football team.
Literally, all I’ve written, now that I look at my notes is, “strong, but nice citrus”. What I meant by that when I said it I couldn’t rightly say now. Obviously at 40 ABVs it isn’t that strong. Was I referring to the citrus element? And even so, was that on the nose or the palate? Memory tells me it was the palate, so strong citrus perhaps. Nevertheless, I liked that element and I think this is a decent whisky. I feel like I paid about the right amount for it.
I’m still very new to the world of Irish whisky, and will have to pick up something a bit special next time. For now, this is easily comparable – even preferable to the lower end of the world of blended scotch. I’d probably prefer a Ballantine’s Finest, personally, but I know a lot of you will balk at that statement. I’d take a Wild Geese over Grant’s, Dewars and Whyte and Mackay though.