The cost of the four holidays I had last year is catching up with me, and I have some big expenses coming up – home insurance and the like – so the austerity measures are hitting pretty hard around here. Not the government’s austerity measures; my own. There’ll be no spending with reckless abandon for a while – except for the stag do, the second stag do and the honeymoon, where I’m looking forward to hitting the Duty Free - but facilitating those is a large part of what these measures are aimed at, so things aren’t all bad. 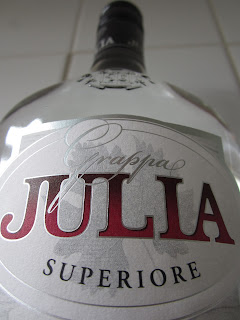 Still, a man needs some short term things to look forward to, so I went to work last week with £20 in my wallet, and I told myself, if I had enough left at the end of the week out of that £20, I would allow myself to buy that cheap bottle of grappa that they have at Tesco. So I needed to have £13 left. If you budget for 5 a side at £6.20, that would leave 80p. So there was to be no chocolate and crisps whenever I got hungry, no bacon and sausage barm first thing on Friday morning, and definitely no takeaway pizza for lunch. It was going to be hard, but these travails make us stronger.

Enough about my financial strait jacket, what about the grappa? Well, yes, of course I made sure that I had £13 left at the end of the week. The carrot and stick approach worked very well. How good though, could a bottle of grappa at £13 possibly be? Obviously I wasn’t expecting it to live up to the standard set by the Domenis Storica that I bought in Venice last year, but retailing at £45-50 in the UK, that one is a little beyond my every day means if I want a nice glass of an evening. If Tesco’s product is even half as good it would be a bargain and a potential new favourite.

The budget brand in this case is Grappa Julia Superiore. It’s the only grappa available in Tesco, and I haven’t seen any other grappas in other supermarkets, so I assumed it would be the equivalent of Bells whisky. Nevertheless, my burgeoning interest in grappa is such that I had to try it.

It has an ABV of 38%, so it is budget standard in that area (the Domenis Storica was an impressive 50%), but in the bottle it looks the part - it’s an interesting shape, and it appears to be made in Italy (as opposed to the Italian part of Switzerland or San Marino, which are the only other places that grappa can come from). Nowhere does it say, “bottled for Tesco”, or anything discouraging like that, though there are descriptions on the back in French, English and German – to me that’s not a great sign, but cool yer boots… 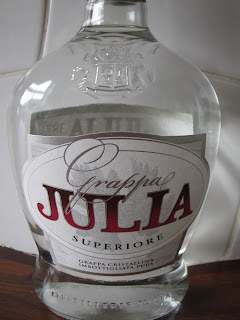 The cap is screw top, so there’s no satisfying squeak-pop on opening, but it has the right smell, and it tastes right. It doesn’t have the lovely sweetness of the Storica, but its (slight) bitterness isn’t overpowering or lasting. It makes a very good first drink of the evening, and I have to say, for £13 I’m satisfied. If I’ll ever buy this brand again, only time will tell – I’m not sure what my grappa needs are yet, but if you do get a craving and your funds are limited, or you’re bored of brandy like the checkout assistant at Tesco said he was when I bought this, it would be worth your while to give this a try.

I was explaining to the assistant that grappa is like brandy, but made differently, and come to think of it, if we widen our net of comparison to compare this grappa to brands of brandy, say the Courvoisier VSOP that retails around £30, I think I much prefer the grappa – it’s half the price, and out of all the sipping bottles I have at the moment, it’s proving to be the every day go-to. No, it’s not as special as the Caol Ila cask strength whisky, but it’s precisely because that’s special that I don’t go to it every day.

The Storica was special also, and all the more precious because of its limited quantity, so while Julia doesn’t quite reach the heights that that one scaled, it’s affordable to the wallet and acceptable to the palate. What more can you ask for?
Posted by Neil Cake at 06:13