The Black Grouse - a whisky to try before you die? 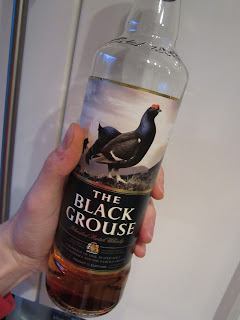 With my (second) stag do approaching [golf weekend], and stocks of the Caol Ila Cask Strength running low, last week I decided it was time to pick up a new special whisky. Having acquired £20 in Sainsburys vouchers, and knowing that I’d be passing a Sainsburys on my way home from a trip to the dentist, I figured I’d call in, and see what they had.

On a previous browsing, I’d noticed the Black Grouse at £17.99. It’s from the Famous Grouse family, and it’s a blend, but my 101 Whiskies to Try Before You Die guide marked it out as… a whisky to try before you die. That’s sure to be special, I thought, and after having a cursory browse of Sainsburys’ wares anyway, that was what I opted for.

Now, I should have known better, but I let myself get a bit excited. I know, but it had been at least a month since I’d allowed myself to buy any hard liquor – possibly even two (though Brenda had brought me a litre bottle of St Remy brandy back from Paris, and her mother had brought me a 75cl bottle of Windsor Canadian whisky from Canada in that time… and come to think of it, I bought that Grappa Julia Superiore on the eve of my previous stag do…) – but the thought of it certainly brightened up my day. 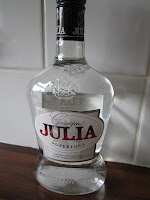 It was a very hot day, so after I’d stashed the bottle of Black Grouse in my rucksack, I headed for the exit, and decided to take my jacket off and carry it home in one of the straps of the bag – while still wearing the bag, I might add. I really should have been more careful because when it got to the point that I needed to take my arm out of the sleeve, the short tug caused me to drop the bag on the floor – I still hadn’t gotten outside the door.

My immediate thought was, that’ll be all right, but as soon as I picked the bag up, I could see there was whisky leaking out of it – loads of spots like when you get a bad nosebleed.

It’s funny, the thought processes you go through in these situations. Your brain quickly scans the possible courses of action. Obviously though, there weren’t any. There was no way of saving the precious whisky, and there was no way I was going right back inside to buy another one. The only positive aspect of the situation was that, as I’d exited to the back of the store, there was no one around to see my calamity. It even crossed my mind to try and get a taste before it had gone completely – by sucking the wet fabric of the bag or something – but I knew the disaster had taken away any pleasure a sip of whisky could possibly bring, and that bag has seen the floor of a fair few Manchester buses in its time, so I left it alone.

I looked around for a bin, and there wasn’t one so - I’m not proud of it but I had to go to a particularly secluded bit of ground nearby and dump the box containing the broken bottle. I commenced the long walk home, upset and smelling of whisky.

I’d texted my best man Phil beforehand that I was just picking up something special, as he was coming over for part two of my stag later that week. Less than 5 minutes later, and I was texting back that I’d dropped the bastard. I also felt I needed to express my sorrow to Brenda, who I called just as she was about to leave for her step class.

It took me the whole evening to get over it. It was less than £20, and it wasn’t even my money, but for some reason that made it worse. I’d been looking forward to spending that free money, and fate had laughed in my stupid face.

I couldn’t even have a drink that night. Some might drink to drown their sorrows, but I drink for pleasure, and the thought of drinking something just made me sad. [sob]… what might have been, I would have thought.

It was pathetic really, but Brenda indulged me, and bought me a replacement bottle with her own money a couple of days later – despite my protestations, I might add. I had a feeling Phil might be intending to do the same, so I told him, and he said that had been his intention. He bought a new driver for the golf weekend instead – and that was a good move, because he scored pretty well.

All of this brings me to my impressions of the Black Grouse. As I said before, it is included amongst 101 Whiskies to Try Before You Die, so expectations were fairly high. It is described as being in the Islay style, so should suit me right down to the ground, and reviews on the Whisky Exchange are mostly favourable, with some comparing it to the single malt, Tallisker. 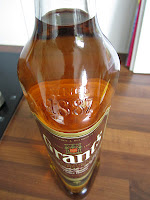 Now, I have had a bottle of Tallisker before, back when I was new to whisky, and it didn’t float my boat. Unfortunately the Black Grouse doesn’t strike me as particularly special either. On the Thursday night when Phil came round, I started him with a glass of Windsor Canadian, then a Grant’s and then a Caol Ila before cracking open the Black Grouse. Perhaps it wasn’t the best time to try a new blend (after the smooth sweetness of the Windsor and the peaty richness of the super strength Caol Ila), but I’d say we were both somewhat underwhelmed. Rather than try another glass, Phil actually requested more of the Windsor Canadian.

I decided it would take a few more tastings to appraise the Black Grouse fully, but a few days and a few more appraisals later, and I’m no nearer enjoying it. I can just barely taste the peat, and the flavour isn’t very complex. What lingers is that bitterness that so far seems to me to be what gives a cheap blend away.
One of the reviews on the Whisky Exchange spoke of pouring it over an ice cube and then leaving it for half an hour. That seemed like a good idea to me, and I’d like to say that it opened the whisky up a little, but it still doesn’t have the complexity and richness that my favourite whiskies have. It cost £18, and it tastes like £18 of whisky. What more can you expect, really?

There is of course, still much tasting and experimenting to go, with over half a bottle remaining – I’ll definitely try adding a couple of drops of water, but can’t really see the point when it’s only 40% ABV anyway. Sadly, it hasn’t filled the position of ‘special whisky’ that it was intended for, but I still have a bit of the Caol Ila left, and I’ll be able to hit the Duty Free in Ibiza in less than four weeks, so hopefully that will turn up a gem.

Well, that may be all from me for a few weeks. I have got a few posts that are ready to go, but I’m not sure I’m going to have time to post them. I’ll be busy finishing up wedding arrangements, getting married and then going on honeymoon. I think all that should give me enough material to last the rest of the year, so I promise I’ll be back in September and I’ll at least try to get one more post in before then. I suppose summer will be over by that time (the leaves are already falling off the trees in Levenshulme), so make sure you eke as much pleasure as you can out of what’s left of it. It’ll be Christmas before you know it.
Posted by Neil Cake at 05:28