Happy Friday, everyone.  I’m afraid this week’s post is going to be something of an unfocused affair. Why? Because things are happening. And because I’ve been very busy this week, so I haven’t had time to work on all the posts I would have liked to have been able to consider for publication.

So, what is it that’s happening? Well, for one thing, the 2012 European Championships start tonight, so that’s very exciting, even though anticipation here in England has been particularly muted. It’s almost like we’re not expecting to win, or something.

I had a massive post planned for the Euros, but it was long, rambling and frankly, nothing that hasn’t been said before, so all you need to know is that it’s happening and I’ll be watching as much as possible. Brenda, you’ve lost me for three weeks. Oh – and I’ve drawn Greece in the work sweepstake, so that’s £2 I won’t be seeing again.

What else? It’s the weekend of Brenda’s hen-do, so I’ve been asked to vacate the premises for the weekend and allow all manner of girly things to take place – pillow fights in lingerie, probably. It means we can take a break from the DIY, and I can pop over to Sheffield to visit Phil for some drinking, maybe some golf and – more importantly from the perspective of this blog – boozy chess.

Yes, I’ve been planning it for a while, but it’s surprising how few people actually play chess, so this weekend will be my first opportunity to try it out.

I’m not immensely experienced at drinking games (just the drinking part), but it seems to me that they are based around the idea that games are fun, alcohol is fun and games are more fun when mental and physical capabilities are impaired by consumption of alcohol. It’s like fun to the power of fun.

Chess though, is a tough game, and I’m expecting it’s even more so when your brain wants to go to sleep under alcohol sedation. I’m not sure how this is going to work as yet – do you drink for the pieces you take, or when your pieces are taken? Well, I guess that will be up to me.

I think the ramifications for possible tactics are quite interesting. If your opponent is a more skilled player than you, and the rule is that your opponent drinks when you take their pieces, a good tactic might be to quickly take as many of their pieces as possible, and rely on the alcohol impairing their ability to coordinate attacks while effectively defending their king… but I guess you’d still need the basic ability to protect your own pieces… and build attacks. Such a kamikaze approach could just as easily backfire, since taking pieces willy-nilly invariably leads to losing your own pieces.

An interesting variation would be that you have to drink when you take a piece, such that taking a piece is both an advantage and a disadvantage.

I would expect that achieving a definitive outcome among two moderately skilled players who are taking the game seriously, quickly becomes impossible since chess is all about forward planning and coordinating attacks while ensuring your king is safe. It requires intense concentration, and because of that, I don’t expect we’ll play more than the one game. So for this first time, the rule will be drink when you lose a piece.

With most drinking games, you know roughly what is going to happen before you start – you just don’t know how much fun it’s going to be. With a game as fiercely tactical as chess though, I can’t really imagine what twists and nuances might result. It seems to me like the sort of drinking game that would benefit from repeated playing, since you could base your tactics on experience of how the alcohol affects the game. So this will hopefully be the first of many. My original idea was to have a four player knockout tournament – two semi finals followed immediately by a final, all played in one evening so how well you win your semi-final has a direct effect on your performance in the final. I’m still recruiting for that. 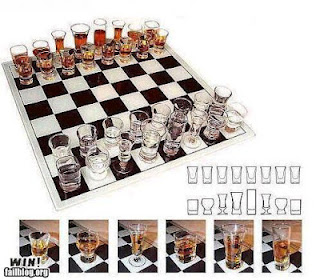 The chess game in this picture looks particularly impressive - all those different glasses representing the different pieces. In that scenario you have one side drinking white liquids, and the other drinking dark liquids. It does have a drawback though; in most chess games you have a number of pieces left at the end (unless you’re both completely crap at chess and end up with two pieces chasing each other round the board…), so you’re going to be left with some drinks that have been poured, but not drunk. Potentially the game could be over with very few pieces removed – I had a non-alcoholic game with Brenda recently, and I only lost 5 pieces in total, so that would have left me with 11 untouched drinks. And how are you supposed to remember which glass represents which piece when you're halfway through the game, you've had a few drinks and the pieces are all moved from their squares?

To deal with the practicalities and guard against wasted booze, I’ll be using ordinary chess pieces, though I haven’t decided yet whether to have different drinks relating to different pieces. Pawns could be a shot of vermouth, more valuable pieces could be a shot of rum, and the queen could be a double, I suppose. I think this time I’ll just stick with one drink, but maybe next time… you never know. Using ordinary chess pieces won’t look as cool, but you don’t need 16 identical glasses for your pawns and then 3 different sets of four and one set of two, all that fit onto a chess board – you don’t need a glass for the king, since that piece is never taken.

My plan is to get the boozy chess out of the way fairly early in the evening, so that we can ride the booze buzz into town for a few hours. Money is tight this month, but I think I’ve budgeted effectively enough for that… until one of those unexpected expenses pops up.

Next week I’ll be back with a new booze related post, and I’ll try to provide an update on how the chess turned out – if it’s interesting enough to talk about. I’ll leave you with a link to a variation on booze chess, in case you want to try that. It sounds pretty hardcore, so if you do, let me know how you make out.
Posted by Neil Cake at 07:27