Coming up this weekend... the Greater Manchester Cider and Perry Festival

This weekend of 22/23 June sees Manchester’s Palace Hotel hosting the Greater Manchester Ciderand Perry Festival. I’m highly likely to be there at some point - for however long - since I’m out on Saturday for an unofficial pre-stag do sort of thing - all for one of my ushers who can’t make the real thing.

The festival is organised by CAMRA, and is almost certain to be well attended. If previous CAMRA events are anything to go by, it will be wall to wall with beardy, middle-aged sandal wearers and thirty-something graduate types – among others, of course. It’s usually a good crowd. The only negatives can be just how busy CAMRA festivals do tend to get - combined with a lack of toilet facilities and compounded by the tendency to run out of product well before the allotted closing time. So get there early! It’s £3 on the door, or £2 if you’re a member. That represents pretty good value.

If you want to know more about ‘real’ cider and perry, check the ‘About Cider and Perry’ section of the festival’s website. It seems CAMRA have drawn up a number of requirements that need to be met if a beverage is to be considered real cider/perry. These include the stipulation that it must not be carbonated, pasteurised, micro-filtered or made from concentrate juice.

As a result, they don’t consider pretty much any brand of cider you’ve heard of to be ‘real’ (sit down Aspall, Bulmers, Dry Blackthorn, Gaymer’s, Kopparberg, Magners, Scrumpy Jack, Strongbow and Woodpecker - all of which feature on their list of ‘ciders that CAMRA does not recognise as being real’ – in a qualitative sense rather than an existential one, I’m sure), but they do recognise that the marketing budgets of these artificial products have helped to raise the profile of real cider. I suppose if people try a Magners, like it, and then decide to try a different cider some time, and the one they pick happens to be a real cider, that’s all well and good. Whether they prefer the real cider, many of which have that special taste of the farmyard in my opinion, is another matter. Nevertheless, more real ciders are more readily available, so if you like booze, you’re winning.

I’m not sure where Stella Artois’ new Cidre figures with CAMRA, but I’m guessing: not real.

My own personal feeling about real cider is that I’m all for it. I don’t view the ‘artificial’ types with disdain as CAMRA do, but I do like a bit of alcoholic variety. How important is it that cider is made in the traditional way? To me, not very as long as an enjoyable drink is the result, and some ‘artificial’ ciders are enjoyable, even refreshing while some real ciders are heavy, pungent and hard to drink.

Is the issue that appley alcoholic drinks shouldn’t be allowed to be called cider if they don’t fulfil the criteria? Are those criteria nitpicking? Is it an obstinate attack on the power of marketing, globalisation, capitalism itself? Is ‘cider’ such an aspirational label anyway? These are rhetorical questions all. It is only CAMRA’s view that certain drinks shouldn’t be called cider. HM Revenue andCustoms aren’t quite so stringent, but in 2010 they decreed that to be calledcider, a drink must contain at least 35% apple or pear juice and have apre-fermentation gravity of at least 1033 degrees, in order to prevent cheap,high alcohol content drinks taking advantage of cider’s lower duty rates. I’ve no idea what pre-fermentation gravity is, and frankly it looks too complicated to bother getting my head round right now, but once again, thanks to Wikipedia for the factual information.

CAMRA certainly favours the small producer, and there’s nothing wrong with that. It’s good that there are people who are willing to promote and attempt to preserve traditional products and techniques. I just don’t think you need to get all snooty, and look down on things that don’t meet your standards – and that’s the impression CAMRA gives sometimes. Just because a drink has been, for example, artificially carbonated, doesn’t make it worse than another drink. Whether you prefer the taste or not is up to you. Nor do I think it is just marketing that makes people drink ‘artificial’ ciders. They wouldn’t continue to drink them if they didn’t like them. 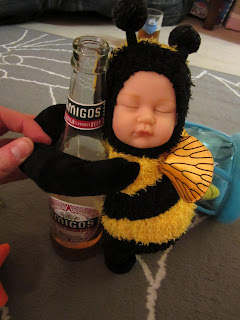 A pint of real cider might not necessarily be as enjoyable as a pint of Magners (or it might be – that’s up to you), but it’s certainly more interesting. You wouldn’t go to a cider festival where ‘artificial’ ciders were all they had, would you? I wouldn’t – you only need one or two artificial ciders before you’ve run the whole gamut (if you’ll allow me to make a sweeping generalisation…) - so I’ll certainly be popping along to enjoy a few farmyard delights on Saturday. See you there.

Have a great weekend, and see you next week. I'm not sure what I'll be posting then.
Posted by Neil Cake at 04:39