People who know me quite well know that sometimes I like to take a drink into the shower with me. I like to think of it as representing a kind of attitude, living the dream, doing it your own way. Yes, I am a maverick. I don’t really think of it like that; I just think it’s cool.

It started when I was at university. Sometimes I’d already be drinking a beer, but I’d need to have a shower in advance of going out and, not wanting to leave any dead space in the drinking, it didn’t take much imagination to conceive of the idea of shower drinking. Innovation – it’s what separates us from the animals. 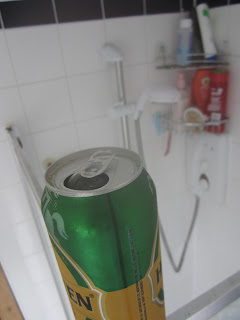 These days it’s less about preventing interruptions in the drinking, and more about enhancing the experience of having a shower – just as having a drink might enhance the experience of sitting in the garden. It’s particularly good if you’ve just gotten in from some heavy exercise, or you’ve played a round of golf in sweltering heat. Let’s face it; there’s nothing better than having a beer when you’re proper thirsty, when you just feel like guzzling it down, until the bubbles burn your throat and you’re ready to stop, then you stop and go: Aaaaaaaaah! If you’re proper thirsty and need a shower: shower drinking. Essentially, it’s kicking back and relaxing - like having a whisky and a cigar on the patio - but you’re getting a job done at the same time, and it doesn’t feel like a job anymore. Afterwards you’ve got a proper beer buzz, because you drank it so fast.

You don’t have to limit your shower drinking to beer, either. You can take anything in there; it just helps to make sure the shower facilities are suitable. Beer is good because it comes in a can, so your liquid is protected from the shower water, and you don’t have to worry about breakages. At home we have a shower cubicle, so I can set the can down on one of the corners.

Stronger liquors are more of a risk, since you generally have to drink them out of a glass, so it means you have to weigh up the risk of breakage and possible injury. Also, if you take it with ice, you need to drink a bit quicker since the heat from the shower may cause it to melt into your drink too quickly. You could use a hip flask I suppose, but I prefer to keep those for covert, out of home drinking (perhaps the showers in the swimming baths?). Drinking from a hip flask around the house is just a bit weird. I suppose you could always innovate in other ways – sippy cups and the like.

Few showers are ideally equipped for shower drinking, but that’s part of the fun – the challenge of making it work, and coming out on top. When I was on a golf holiday in Spain, I’d take a glass of brandy (Cardinal Mendoza Solera Gran Reserva ) into the shower with me, and there were no shelves at all in there, not even one of those awkwardly shaped ones that are designed to hold soap. Luckily the shower space was fairly large, so I was able to set it on the edge at the bottom, far enough away from the cascading water to ensure that there was no contamination. You wouldn’t want any soap suds dripping in, would you? Perhaps that’s what those little cocktail umbrellas are for…

Try it. And tell me if there’s anywhere unusual that you like to take a drink.
Posted by Neil Cake at 05:10