Shortly after the missus and I returned from honeymoon, we came across a copy of Maxim magazine that had been left behind by my new brother-in-law. In it were instructions on making your own flavoured vodka. Apparently it’s as simple as dropping fruit or spices (or whatever) into a bottle, and leaving it in a cool dark place for two weeks.

Now, I was never really interested in making my own flavoured vodka because I haven’t really worked out what the use of it is yet, but it definitely seemed like the right time for me to find out because one of the best presents the wife and I received on our wedding day was a selection of homemade flavoured vodkas from our friends Paul and Victoria. They were beautifully presented (as you can see), and came in lavender, rosemary, cinnamon and vanilla flavours. 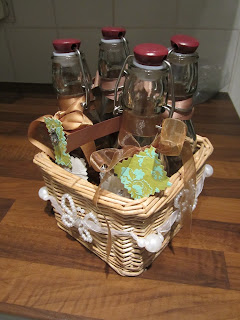 “Well!” I said, “You’ve found the perfect gift for me! What have you brought for Brenda?”

Naturally, I couldn’t wait to start dipping into them, and waited only until the night after our wedding before randomly plucking the lavender one from the basket, and pouring it into a hotel-issue glass.

Lavender is a weird flavour though, isn’t it? Who eats lavender? Oddly enough, I’d had some lavender flavoured ice cream at Room just two days prior to receiving this gift, and that was a strange experience.

There were three scoops of different flavours, and the waitress had asked me if I wanted to know what they were before she brought them out. I said no, and it turned into a guessing game. Lavender was the first one I tried, and it just seemed so unusual that it fooled me into thinking I didn’t recognize it for a moment.
I suppose I had a vague recollection of what lavender at least smelled like because, when I was studying for my university exams, my mum heard lavender would help with concentration, and left a little glass of it in my room (to sniff!?). One day my dad saw it, and thought it was weed - which was funny because there probably was weed in my room, just not there. Funnier than that is that they found my stash, ripped Rizla packets and all twice and didn’t even realise what it was. My parents are old-school and believe all the government has told them about recreational drugs. Just like in Hunter S. Thompson’s Fear and Loathing in Las Vegas, I think the “high and beautiful wave” of freedom and love in the 1960s broke and rolled back before it reached South Yorkshire…

The lavender here has turned the vodka a fascinating purple colour, but I have to say this is probably my least favourite of the examples. 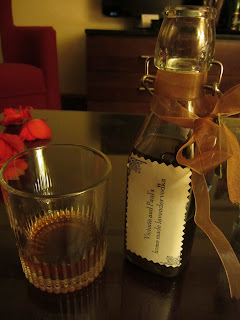 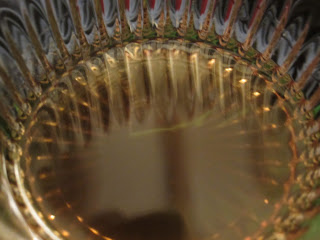 It wasn’t long before I went on to try the other choices, and for drinking straight, the vanilla and cinnamon varieties were most successful in my opinion  - despite not being a particular fan of either flavour in general. It turns out that Paul is also of the opinion that these are the two best flavours.

I moved on to trying the two less successful flavours with tonic water – rosemary, then lavender – and the results were actually delightful – surprisingly the lavender performed particularly well and I got through it pretty quickly after that. 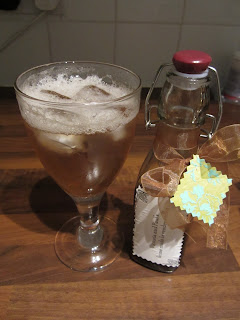 If you’d asked me in a general sense, which is my favourite flavour: vanilla, cinnamon, lavender or rosemary, I would have said rosemary – though I’d generally have that with meat. It’s interesting then, that vanilla and cinnamon make the best vodkas, while lavender mixes best with tonic. Still; rosemary is the winner when it comes to pork. In fact, I brought these out at a party recently, and someone said they tasted like gravy…

Later – I don’t know whether it was a result of oxidisation, or the state of my taste buds at that particular moment – the vanilla vodka started to taste bitter. I felt the Aldi product that Paul used to make these was probably starting to come through, though it hadn’t on previous tastings. It wasn’t unpleasant, but I did feel I needed to dull the edge slightly with a couple of ice cubes. That did the trick.

Why don’t you give your own flavoured vodkas a try, and let me know your results? As I said, Paul used the standard Aldi vodka for these, and I’d say they were successful attempts, so you don’t need to splash out or anything, and it might be a good chance to use up a brand you don’t like so much. A lot of brands sell various flavoured vodkas now, and the bar Revolution is almost entirely dedicated to flavoured vodkas, but why bother buying when you can make your own?

I think my next step will be to buy a flavoured vodka, and see what that’s like. I see from Proof 66.com that one or two of the flavoured Stolichnaya varieties (my favourite vodka brand so far) are rated higher than the standard variety, though I think I’ll be trying this 50% ABV one first. It’s interesting though, that the product description says “we are looking for an absence of flavour in vodka”. If it’s an absence of flavour we’re looking for, why is the standard Stolichnaya so damn tasty? Come to that, I saw a poster the other day for Grey Goose vodka, in which it claimed that it was the best tasting vodka. So does that mean it’s the tastiest, or that it has less flavour than other vodkas, and that presumably that is better?

Very confusing. Nevertheless there’s still plenty to learn about vodka, and as ever, my journey continues.

On to my weekend preview then, and speaking of Paul and Victoria, the missus and I will be seeing them this weekend at the Bearded Theory Festival. The weather forecast doesn’t look too good, but the alco-forecast is showing a 100% chance of getting hammered. You’re allowed to take a ‘moderate’ amount of booze for personal consumption into the site, so I’ve been procuring beers and spirits for the occasion, and am already looking forward to cracking open that first one. 9.30 am on Friday, anyone?

As ever, whatever you get up to, I hope it’s a lot of fun. I’ll be back next week, on my usual day (Friday) for some more alcohol-related guff. Don’t forget, if you can’t get enough of me, you can follow me on Twitter (@alcothusiast). See you then.
Posted by Neil Cake at 10:30