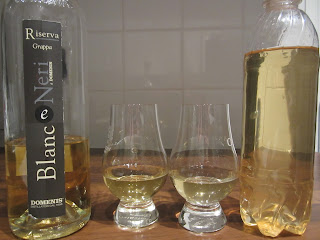 A couple of weeks ago I thrilled you with tales from my Vietnamese honeymoon, one of which involved coming into possession of a bottle of bootleg longan wine. I remember my first impression on tasting it was that it was a bit like grappa, and I have made no secret of the fact that I’m a big fan of the grappa - it’s not as readily available, as varied or as complex as whisky, but I think it is probably my second favourite spirit.

So one of the first things I thought of when I got my grubby little mitts on that longan wine, was that I would have to do a comparative tasting at my earliest convenience. Ladies and gentlemen, I give you, weighing in at 40% ABV and costing £48: Domenis Blanc e Neri grappa – aged 18 months, and already victorious in a contest with the budget Grappa JuliaSuperiore.

The challenger this evening is the 45% longan wine, distilled by a guy in the Mekong Delta, presented in a plastic bottle, and costing something like £4.70. May the classiest spirit win.

In terms of presentation there are some interesting considerations. Blanc e Neri comes in a box, and the bottle has a plastic cork. Any kind of cork is a good thing when it comes to spirits. With this one, there’s no squeak on opening, but there’s a magnificent and resounding pop. The longan wine though, is homemade. It’s rare. I had to go all the way to Vietnam to get it. That makes it incredibly cool in my opinion. Unfortunately it comes in a plastic bottle, which makes it look like something you might find on the floor at a festival.

There isn’t actually that much difference in colour between the two spirits. The grappa has been aged for 18 months, so it’s not white like all the other grappas I’ve ever had. If there is any difference, then it is that the grappa is very slightly deeper in colour.

I’m afraid that while I did get a brief description of how the longan wine was made – which essentially confirmed that it was distilled – there was no information with regard to aging. I must presume that, since newly distilled spirit would be clear, that it has been aged – or if not aged as such, the colour is the result of being stored.

The differences really started to come out when I got to the nosing. Blanc e Neri is fragrant, fruity and rich while longan wine is… weird. It’s unmistakeably east Asian, but beyond that I don’t know how to describe it.

I realised at this point, that longan wine isn’t really that much like grappa at all, and I don’t know how I ever came to think it was. I suppose it must have some element that led me to think that but alongside the real thing, they are quite different. 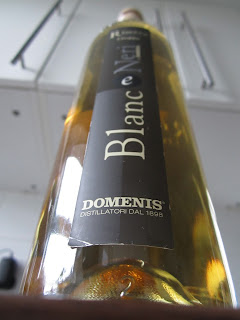 It only took a couple of sips alongside the grappa to give me the impression I didn’t really like the taste of the longan wine all that much. My tasting faculties must have been acclimatised to Vietnamese flavours while I was over there, as it has a kind of bready flavour in contrast to the fruity tones of the grappa that I didn’t notice initially.

Soon after the test began I found I was trying to get the longan wine out of the way so that I could relax and settle into enjoying the grappa so, to cut a long story short, Domenis Blanc e Neri is victorious once again.

Thinking back now, when we were tasting the longan wine originally, the guide and the guy who made it were knocking it back quickly, while I’m used to eking out every last drop of flavour from whatever I’m drinking, and now I think I know why. I could finish off the rest of my bottle that way, but I don’t really see the point in drinking something if you don’t want to taste it. If you didn’t want to taste your liquors, you wouldn’t get interested in booze because the cheapest vodka at the supermarket would be sufficient.

I thought at this point that I might be stuck with this bottle for some time, and I’d probably end up tipping it down the sink. I had figured that most of my friends wouldn’t be very interested in it but it goes to show that you shouldn’t go assuming all your friends are the same. Several were willing to give it a go and one or two even said they thought they liked it. I took it along at one point to a meeting of the Manchester Whisky Club, and while I didn’t honestly expect anyone to want to try it, to their credit the general attitude was one of enthusiastic curiosity. No one was concerned about the possible adverse health effects of drinking unregulated alcohol. What does that tell you? I can’t say anyone actually liked it, but a number of people were willing to give it a try. I’d like to thank everyone for that.

When I bought it I was hoping the longan wine would be a suitable replacement for my grappa as it gradually dwindled to nothing, but while I was wrong, I like to feel I got some good value out of it. No, I never enjoyed it while relaxing on the sofa or in the garden, but it provided an interesting talking point and proved good entertainment when friends came to visit.

The high point for me actually, was when we went to a bring your own booze Vietnamese restaurant, just north of Manchester’s city centre (Vnam). I took a couple of large beers, as you should, but I’d been thinking hard for a few minutes about taking a bottle of spirits with me too. We just couldn’t figure out between us whether there is an etiquette about these things and whether it is even allowed to take anything other than beer or wine. In the end I didn’t bother finding out (though to be fair, I should have done that just so I could let you know), because I remembered I had the longan wine, and it might provide a nice accompaniment to the Vietnamese food. It actually did. I had wanted to ask the staff at the restaurant whether they knew what it was, but my friend Claire said I shouldn’t because I’d look like a dick. I took her advice. I was still hoping they might notice it – honestly, you could smell it across the restaurant when I opened it. Gav and I polished off the bottle between us and got nicely smashed. The food was pretty awesome too.

Well, I’ll be heading to Italy towards the end of next month, so I’ll finally get a chance to replace that bottle of grappa without having to remortgage. I think some Italian brandy will be on the cards as well. As ever, more on that sometime in the future.

Now, you might have noticed that it isn’t Friday. Yes, I’m afraid I couldn’t be bothered to post on Friday night and since I am often busy on Fridays, and less so on Sundays, I think Sunday will be my regular day from now on. It shouldn’t matter much to you, to be fair. So! Instead of having a great weekend, I hope you had a great weekend and continue on to have a satisfactory week. I’ll see you next Sunday.
Posted by Neil Cake at 06:38