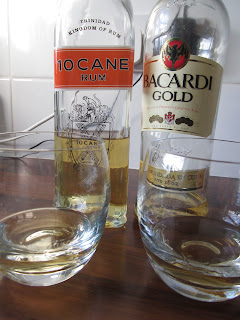 I know I can bang on for thousands of words about next to nothing, and I know most people aren’t even going to read most of it so, for once, and given that I haven’t got much to say about this topic anyway, I’m going to keep it real short and real sweet – not like this introductory sentence. That will be as rambly as it gets. Promise.

So, it hadn’t occurred to me to pit these two brands of gold rum against each other before, but why not? That Bacardi Gold (37.5% ABV, from Cuba) has been sitting around, unloved for quite some time, while  the 10 Cane was a very generous birthday present from my friend Phil. Phil’s quite keen on his expensive rums. I have to admit, I’m not quite up to speed with that yet. I just don’t see the complexity in rum that I see in whisky and as a result, I’ve never been compelled to spend more than £20 on one. That could just be my failing, but don’t worry, I’m not giving up altogether. I’m sure there are some lovely ones. 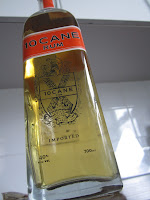 So, as I promised, I’m going to keep the comparison short. 10 Cane (40% ABV, from Trinidad) comes in a cool squared bottle and actually has a cork instead of a screw cap. The liquid is paler than that of Bacardi Gold, but it is the stronger of the two.

The biggest consideration however, is which tastes better. And that’s where I struggle. There is a difference in flavour (though not in mouthfeel), but it’s not one that’s big enough to justify the disparity in price – just over £10 at The Whisky Exchange. Is that 2.5% alcohol worth £10? I’m thinking… not. I don’t claim to be an expert in rum, so this might not be the last word on the subject, but to provide you with some sort of conclusion to this experiment I’m going to have to say… it’s a draw. I certainly wouldn’t be buying the 10 Cane if all I wanted was a mixer, and I probably wouldn’t buy either for sipping so I’ll just have to keep an eye out and see if there are any gold rums out there that could force their way into my sipping requirements.
Posted by Neil Cake at 06:51