Good evening. Thanks for joining me again. I hope you enjoyed last week’s Vietnamese adventure. If you missed that, you can see it here.

This week will be a very much more shortlived affair, as I return to the subject of Hot Toddies. If you saw part one, you would know that after a few unsuccessful experiments there was one more I wanted to try. It was some time before I felt unwell enough to try it, and a few days more before I could be bothered to make it, but make it I did, and here’s the resulting post. Enjoy. 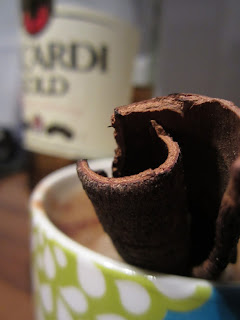 Months after beginning my hot toddy investigation, I finally got ill again. It culminated on Saturday when the missus and I both awoke gasping for breath at 4 in the morning. Wide awake, we soon gave up any forlorn hope of sleep and got up to see the dawn in by watching back to back episodes of Columbo. It was actually quite fun, but we felt like shit.

It wasn’t until Tuesday night however, when I was well on the way to recovery, that I got around to trying the remaining hot toddy that I had wanted to try since Part 1. I figured it would be my last chance before I was completely well again.

The drink was Hot Buttered Rum. I can’t really remember where I found this recipe, but here it is:

I had to substitute the unsalted butter for salted butter (I’ve often wondered how much difference these things make, but never noticed), the allspice for ‘mixed’ spice (I suspect these are the same under different names – I wasn’t stupid enough to use the Chinese 5 Spice…) and the freshly grated nutmeg for long previously ground nutmeg. I can’t imagine any of those things made too much difference to the outcome.

Similarly I had to adapt the method slightly. I didn’t have a heat proof coffee glass, so I wasn’t able to heat the butter, syrup, allspice and rum in one. Instead I just used a saucepan. Nor could I ‘top up the glass with warmed apple juice’ because I didn’t see the point in heating the apple juice separately, and thus causing more washing up! I just poured the apple juice in with everything else and stirred. I did warm the cinnamon stick though, on the hob – you’re supposed to add it to the drink as a stirrer.

The instructions said to stir until the butter had emulsified, but I didn’t really know what that meant, so I just stirred until the mixture appeared smooth, and was hot enough to drink. A little internet research I’ve just done defines emulsified as “to turn into an emulsion” and emulsion as ‘a suspension of small globules of one liquid in a second liquid with which the first will not mix’ – like oil and vinegar. If that’s the case, the mixture was surely already emulsified. Eeh, ah dunt know.

The drinking of this mixture pretty much confirmed the way I already feel about hot toddies. On first test, my reaction was, ‘that’s quite nice’, but it didn’t last. The flavour is very much a case of sweet and sour, and for me, that gets old very quickly. When was the last time you had sweet and sour chicken from the Chinese? Yeh (assuming it was ages ago). The further down the mug I got, the harder work it became, and the less pleasant. In fact, I would go so far as to say the drink made me feel worse than I did already. But that’s probably just me.

Of all the drinks of this genre I’ve tried, this was the most complicated but also most successful. I still don’t buy into this whole warm alcoholic drinks thing, though. If that’s just that I haven’t found one for me yet, I don’t know. Nevertheless, I still favour my strong alcohol on its own.

If you think you can suggest a warm alcoholic remedy that might just change my mind, go for it. I’m still willing to experiment, though it could be some time before I’m unwell again.

And that’s it for this week. I know, uncharacteristically brief, but you know, sometimes there isn’t that much to say, and it’s not like anyone ever reads more than a couple of paragraphs of a blog anyway. Just a quick word about this coming weekend then; it’s an exciting time because it’s the start of the football season. Mrs Cake will feel like she’s The Old Widow Cake from time to time over the next 9 months as I go to a friend’s house to watch Liverpool matches and stay up late watching matches I’ve recorded on TV. Spare a thought for her, won’t you? And... make sure you have a great weekend.
Posted by Neil Cake at 10:28