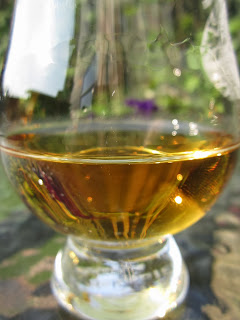 I had a pleasant surprise one Saturday, when a visit to my parents resulted in receiving a new bottle of whisky. Apparently my dad had been emptying out the pantry because they needed to find storage space for some things that had been displaced by the arrival of a dishwasher, and he found some booze hidden away in there – you wouldn’t get that in my house. I was invited to take a look – like one of those experts they get in on Cash in the Attic.

First out were 20cl bottles of Gordon’s Gin and Smirnoff vodka. Pretty standard, and no more than I had expected. I would have been happy to take these off their hands – I’m not a big fan of Smirnoff, or the whole genre of gin, but that doesn’t mean I don’t have requirements – nevertheless, my mum laid claim to those, for drinking with orange or tonic or whatever – she doesn’t normally, and actually had to ask me what she could mix vodka with. The answer? Nearly anything.

Far more interesting than those anyway, was what came out of the pantry next: White Horse blended scotch (40% ABV). It’s not a brand you hear much about, being as it is, more popular and readily available in overseas markets. I had heard of it though, from a brief perusal of sub-£20 blends on The Whisky Exchange (£18.55 + P&P, btw). Reviews were exclusively good so I’d made a mental note to keep an eye out for it next time I was looking to buy a blend.

It scores an impressive 90.5 in Jim Murray’s 2013 Whisky Bible, is made up of 40% malt whisky, and has as its base, the excellent Lagavulin single malt. I read somewhere though, that it is actually blended from around 40 malts in total. Does that mean each malt comprises only 1% of the resulting blend?

Where did this buried treasure come from? Apparently it all used to belong to my granddad… who died about 15 years ago. None of the bottles have been opened, so it should be fine – despite the fact that there looks to be a lot of air at the top of my bottle – perhaps some of it had evaporated? I’ve read before that whisky will taste as good as when it was bottled for hundreds of years, as long as the bottle remains unopened. And now this particular bottle belongs to me and there is no longer any chance of it remaining unopened for hundreds of years. I give it a week or two at most.

I don’t know if you’ve ever had this experience, but when my grand parents learned they were not much longer for this world, they started asking me if there was anything of theirs I wanted. I said that I would like whatever they specifically wanted to give me. The person is more important to me than their stuff. A word of advice for you though, if an elderly relative of yours asks you this question, think about saying, “I wouldn’t mind having your booze”. You never know, you might get something valuable. Worst case scenario: some bottles of booze.

Something else my granddad did as the end approached was to try to give me the benefit of some useful things he had learned. One was about changing a tyre, that I’ve sadly forgotten, and the other was about how to emerge from a shower cubicle in winter without feeling the cold.

White Horse, I see, is one of Diageo’s blends, though my internet research so far has not revealed for how long Diageo has produced this particular brand. Diageo was formed in 1997 from a merger between Guinness and Grand Metropolitan, and that’s probably roughly around the time this particular bottle was produced, though nowhere on it is the name Diageo mentioned, and to be fair, my granddad could have had it for quite sometime before he passed on anyway. It remains to be seen then, whether this bottle is representative of the White Horse brand you might be able to buy today, since I’ll need to buy a new bottle to determine that.

Have you ever inherited any booze? I remember now that when my Grandma died, I was given a litre bottle of Teachers so, you know, it would be interesting to know what gets left behind at the end of a person’s life. If you were proper into whisky you’d probably make sure you were finishing the good stuff in your last days – or maybe there are more important considerations for the terminally ill. Would you drink the good stuff, leaving the Teachers, or would you save something special for the end?

So, what about this White Horse, then? I broke the seal and gave it a first tasting the night of the Confederations Cup Final, and was impressed right away. In the glass, it looks simply beautiful. There’s something about that rich hue that shimmers invitingly in kitchen lighting conditions. Incidentally, I'm sorry but I don't seem to have taken a picture of the bottle. I don't know how that happened.

As I said, it is supposed to be founded on Lagavulin, and while I can’t say I detect that in there specifically, there is a definite feel of Islay. This is a nice blend – not as great as the Jim McEwan’s Symphony that rocketed right to the top of my blend league – but approaching that level of complexity and refinement.

After a couple of tastings I started to detect vanilla on the nose – like the Bladnoch 10 that I had some time ago. Grainy elements also started to show through on the finish, where I hadn’t been able to detect them before. In spite of that, on the blended scotch scale it sits closer to the delicate sweetness of the Jim McEwan’s Symphony than it does to what I consider standard budget blend fare where sweetness is lacking and instead the spirit seems rough and unpleasant .

Perhaps not one to bring out when the single malt snobs come round, but I wouldn’t use it for mixing. It’s definitely one to consider if you’re looking for a decent blend on a budget.

I see from looking at my stats today that this is my 100th post. Go me. Thanks everyone that has popped by whether it by to read, look at a picture or whether it was entirely by accident. And apologies for my tardiness. I’ve not been so good at posting regularly of late, but I’ll keep trying. See you next week (or later this week) for something else.
Posted by Neil Cake at 11:11