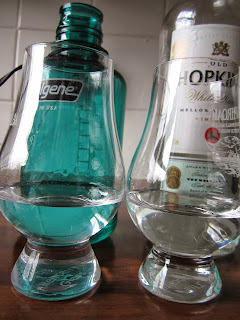 A forthcoming trip to the Bearded Theory festival (some of which I told you about previously) a few months ago (messing with conceptions of time here), led me to considering the purchase of a new white spirit.

As you may have learned before – if you’ve read any of my previous posts – I can be quite methodical, so my thought process went like this. The Bearded Theory Festival allows you to take your own booze (both into the campsite, and into the arena area, which is something of a novelty), in moderate amounts. Moderate is defined as 16 cans of beer each. They don’t allow glass.

As well as the beer, I wanted to take some hard liquor – you know what I’m like. So I thought, I don’t want to take anything special, but I do want to take something I can enjoy (and that Mrs Cake could drink with a mixer). Just to narrow down my choices more, I decided to get something that would look like water when poured into a plastic bottle. I’m sure it wouldn’t have mattered if it didn’t look like water, but as I say, I just needed something to narrow down my criteria. So that left a choice between vodka, gin, tequila and white rum – so it didn’t narrow my choices down all that much…

Since it couldn’t be special, that meant it could be cheap. What I settled on then, was white rum. Of course, it is primarily for mixing, but it does have its uses in hipflasks and for quick pre-sesh swigs – you know; quick warm-up tugs before you leave the house.

Fate actually decreed that on this rare occasion, I found myself in the M&S food section in the Trafford Centre the night before the festival, and they had something that fit the bill; M & S White Rum – yes, a supermarket own brand from Guyana – ooooh!  At £12.19 it was the right price, and assuming there would be any left after the festival, this would present an opportunity to ask how budget upstart supermarket Aldi's Old Hopking could stand up to the might and reputation of Marks and Spencer. I like Marks and Spencer, but I don't do much grocery shopping  there. 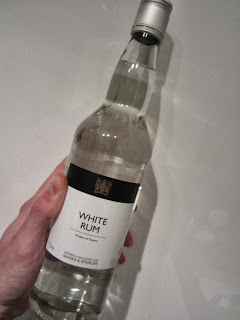 Now, white rum isn’t up to all that much on its own, but it’s ok. It’s sweet at least, so you can enjoy it without loving it.  For the record, I did enjoy it at the festival. It proved very useful for topping up the old buzz from time to time, and I’m glad to say that in spite of that, I was able to bring a little home – in the Nalgene bottle you can see in the picture there.

So one Friday night, after posting my blog and knocking back a quick Wall Street, to see if it had improved at all (it hadn’t), I dove into another booze face-off. I don’t know if there are such things as rum glasses, but if there are, I don’t have any, so I decided to go with the Glencairn. Let the tasting commence.

Now, these are cheap brands – around £10 for the Old Hopking and £12.19 for M & S (both are an indifferent 37.5% ABV), so you can’t expect too much – and as you might expect, they don’t stand up to too much close scrutiny under discerning, home-tasting conditions. I embraced my inner geek, and made some tasting notes for you, in which I noted that on the nose, the M & S brand was a bit caramelly. Then, for the Old Hopking, I’ve er… confused myself a little, by stating that it smells sour in comparison – but not in a bad way, and then later I’ve written, like dirty socks. I’m only telling it how it’s written. It must have made sense at the time. 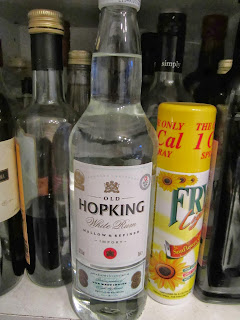 On the palate though, for M & S I’ve got that it tastes like it might have gone a bit stale, though it shouldn’t have since it was only a week since the festival. Perhaps storing it in a plastic bottle doesn’t do it any favours. I’ve also got that it tasted a bit fishy, and that it gave me the impression of being in a seafood restaurant on the coast – not something I want in my rum, I’m afraid.

For the Old Hopking, I’ve just got that it isn’t as sweet, but it is fuller bodied. It’s not a bad thing that it lacks the sweetness, and I do tend to prefer a fuller bodied spirit.

It wasn’t a particularly enjoyable tasting if I’m going to be brutally honest with you, and I kind of wished I’d broken out the special stuff earlier. No big loss, Mrs Cake and I went on to finish off the Bruichladdich Islay Barley later that evening anyway. It just backs up my theory that white rum isn’t for sipping, but it will serve you well if you want to mix it or stick it in a hip flask for taking nips when you’re out and about.

Was there a winner? Not really, I’d say you could just get the one from whatever supermarket you happen to be passing at the time, as a general rule.

As a postscript though, I’d just like to tell you that there was a little left in that bottle, and Mrs Cake was encouraging me to finish it off (she wanted use of the Nalgene bottle back), so I did one evening while I was cooking dinner. I didn’t bother pouring it into a glass and oddly, I enjoyed it again. I didn’t bother comparing with the Old Hopking this time; the simple fact of enjoying the M&S Rum was enough.

In spite of finishing it, I do still have about a quarter of a bottle of white rum left, so I won’t be needing to get a new one any time soon. I have been quite slack in my pursuit of varied spirits lately mind, and have just been buying more bottles of whisky instead of replacing the Putinoff vodka, Richmond gin and el Jimador tequila that Mrs Cake and I have polished off. I think that’s a situation to address next month…

There are of course, lots of supermarket own brands still to try, so maybe one day we’ll have an undisputed supermarket rum champion. Watch this space.
Posted by Neil Cake at 09:04