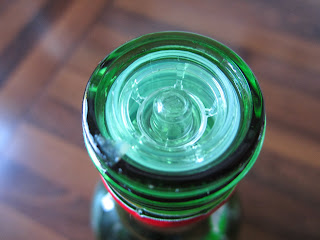 If you’ve ever bought a bottle of strong alcohol in the southern European country of Spain, there’s a good chance you’ve been confronted with what I can only describe as a booze resistor. Here it is. It is essentially a plastic nozzle that has been inserted and fastened in the top of the bottle. It works in a manner similar to the way an electrical resistor works, in that it prevents some of the current (in this case, booze) from coming out into your glass which - let’s face it – is where you want the fucking stuff.

I have no idea what these are for, as they seem to have no fucking purpose whatsoever. Do correct me if I’m wrong, but I don’t see what can be useful about a device that facilitates:

Shake it, fiddle with it, try to break it… you’re not winning with this device. Why, the country of Spain, why?

If there is a logical reason or purpose and I’m just  too stupid to get it, I sure would like to know. Over to you.
Posted by Neil Cake at 06:44