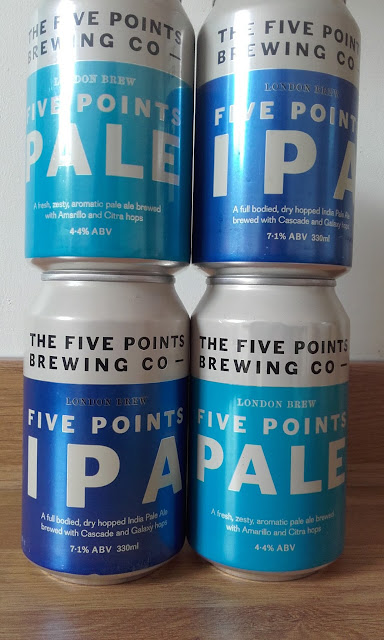 One recent trip to West Didsbury’s The Epicurean led me to trying a Five Points Brewery IPA. At just over £2 for one 330ml can and an enviable 7.1% alcohol, I considered this to be decent value. How good value it would turn out to be is yet to be revealed…
Cans have suffered something of a demise over the last few years it seems. I suppose that depends on your perspective, but it does seem there are less cans available in your local supermarket than there used to be, with all craft and specialty ales favouring the bottle format. Personally, I rarely bought bottles until a year or two ago, and the reason for that was originally that cans represented better value in terms of liquid per pound of money, while a requirement to try a different beer every time led to a need for change – there were just more beers available in bottles.
And now – popular with some, less so with others – cans seem to have been making a bit of a comeback. I have no strong feelings either way. It is notable that most of these new cans are of the small, soft drinks can size and, while that would have bothered me as a much younger man, I don’t mind it at all now. There just seems to be something uncouth about a 500ml can these days. 440ml is still just about alright.
These ones by Five Points are nicely presented. There was only one problem. As I was sat outside in the garden one afternoon enjoying the IPA, I realised I wasn’t actually enjoying it at all. There was something oddly metallic about it, and that impression was growing. I scored it 1 out of 5 on Untappd, leaving a little comment and thought nothing more of it.
Naturally, the first thing my friends suggested on mentioning it to them, was that it must be something to do with the can – but how can it be? I’ve drunk a lot of cans of beer in my younger beers and never experienced anything like this. So I had to just put it down to bad beer.
Now, Five Points Brewery themselves stepped in here. No doubt they monitor their social media performance and, more than that, seek to make amends when something goes wrong. First they asked for a little information (bottle, can or keg?) and offered a replacement. Very generous, I thought. Even more so; I’d only bought and failed to enjoy one can, but within two days four brand new cans arrived at my house, free of charge. Result – unless there wasn’t a problem with that original can, and all I had now were four cans of crap beer. It’s not like I wasn’t going to find out though, is it? And even if I didn’t like them, that’s just a matter of personal taste, and you have to give Five Points massive credit for the strength of their convictions. Just don’t go taking advantage now, ok?
So I got two cans of the 7.1% IPA and two of the 4.4% Pale Ale. Let’s see what the verdict is, shall we? 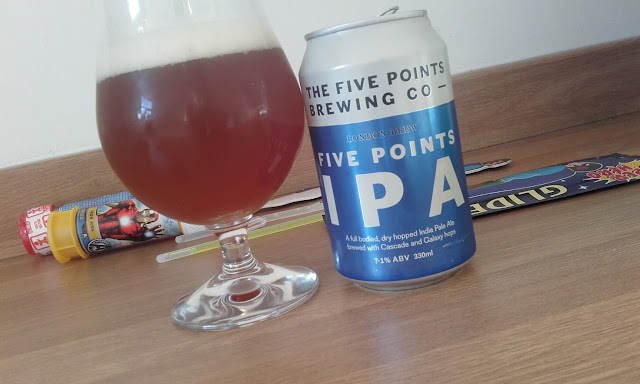 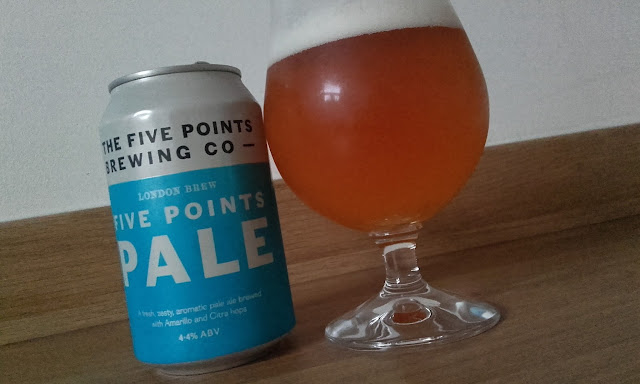 It was a difficult time to be giving Five Points a fair appraisal of their wares because I was in the process of recovering from the shingles. Then I got a nasty stomach bug. Then I got a nasty assed cold. None of this gives you much opportunity for drinking, and if you do, there’s not much chance you’re going to taste it. Anyway, I waited for a time when I felt I had my faculties back, and I can happily report that there was no hint of that metallic impression I’d originally had, and in all, both varieties were sharp and inviting. The Pale Ale was a little bitter on the finish for my personal taste, but they were worthy of a 3.75 out of 5 for the Pale and a 3.5 for the IPA. Not too shabby.
Since that occasion, no other brewery has responded to a poor Untappd review with an offer of free beer. Several have liked my check-ins, even when the star ratings were low, but that’s been the extent of it. I have to reiterate then, that Five Points deserve a bit of credit for their customer service – not just because they offered free replacement beer, but because they responded to the specific nature of my comment. They knew it wasn’t supposed to taste metallic, and that if it did, there was probably something wrong. Good for them.
I’ll just end with a little regret; I’m sorry to say that I haven’t bought any Five Points products since that occasion either – not deliberately, it just hasn’t happened. I’m certainly not avoiding it, and I will be buying some more eventually. I promise Five Points, I’ll make it worth your while.