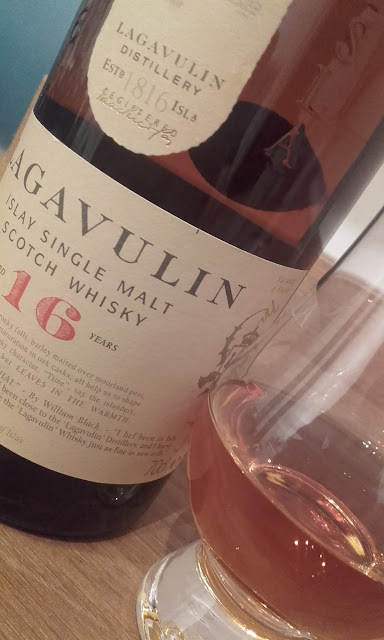 I’ve been starting to struggle a bit with my whisky procurement matrix of late. The latest round of difficulty came with trying to step my Islay experience up a notch with the purchase of something aged between 14 and 17 years. The problem is, much as I’m a fan of the produce of the island of Islay, the prices can be a bit prohibitive. Can it be that reputations lead these whiskies to be somewhat overpriced?
So what are we looking at? There isn’t a Caol Ila option in this age category, and I’ve already tried the 18. If there were a Caol Ila 15 or 16 say, it would certainly be in contention… actually, since writing that sentence (and indeed, since making my purchase), it turns out there is now an unpeated 15 year old Caol Ila, and it sells for around £90. That’s probably a bit much, unless I can get a deal on it somewhere.
Bowmore do a 15 year old that goes by the name, Darkest, but I don’t find Bowmore all that inspiring and at £55, it was perhaps a step too far.
Being between the standard ages of 10 to 12 years and 18 plus, the category I was looking for is an awkward one. Most distilleries – Ardbeg, Laphroiag, Bunnahabhain – don’t offer anything in the range (though you can locate a vintage or merchant bottling if you’re feeling flush), Kilchoman don’t have any spirit that old yet, and Bruichladdich, while they make excellent whisky, price themselves a bit above a region I feel comfortable with.
That leaves just one, doesn’t it? Ah yes, Lagavulin. Of course, we’re all well aware of the excellent Lagavulin 16. I’ve tried it and loved it, and bought it as a gift before, but I’ve never bought it for myself. It was an obvious choice and, for that reason, one I did my best to avoid. I just wasn’t getting drawn in by anything else though. There was a Bowmore 17 White Sands, which I skipped over for the same reasons I’d dismissed the Darkest, and a Port Askaig 15. I’m dubious about the Port Askaig releases because they don’t tell you which distillery produced their whisky, and £75 is a bit much for such sleight of hand – though since writing that sentence I heard that Jim Murray had scored a Port Askaig well into the high 90s in his 2016 edition, and indeed made it one of his whiskies of the year. One to try another time, then – in spite of how frequently I disagree with Murray’s appraisals.
Next I was looking at vintage bottlings – a 1998, 15 year old, unpeated Caol Ila… tempting, but £80 again? Maybe not. What about a couple of Lagavulin Distillers Editions? Again, you’re looking at more than £75 when you factor in P&P. In the end, I just couldn’t see anything that seemed better value or a better bet than the classic 16 year old Lagavulin. At £48.46 from Amazon, you can be sure you’re getting quality (though I later learned I could have saved 10 quid by getting it at Costco), and the question of whether you want to push your spends over 70 quid can be deferred until a later date – like next month, when my procurement matrix has suggested I should get an 18 plus year old Highland malt. We’ll see about that. I think I’m clearly reaching my threshold because, frankly, you don’t need to spend that much money to get great whisky. But every now and then, I just might.
Now, you can see from the picture that the ‘vulin 16 (as I think I’ll call it) is beautifully presented. Brown bottle, tasteful labelling, and a classy navy blue box with gold leaf lettering. It certainly looks and feels the part.
Crack that bottle open, and you get the unmistakable whiff of peat that promises a cosy evening. It emerges from the bottle like a genie and makes sure everyone in the room knows it’s there.
In the glass it looks the part too, but that is aided perhaps by the addition of caramel spirit. I really don’t know why they bother doing that – especially since the tinted bottle means you’re not going to turn your nose up at the spirit before you’ve even decided to buy it.
It’s bottled at 43% instead of the preferable 46, but it oozes class all the way – and you don’t have to worry about whether you should be adding water (don’t).
On the tongue it’s sweet and lingering, and it might just come back to visit you the next day… a real bonus taste.
So in all, as long as I don’t think about how much I could have saved at Costco, I got my money’s worth with the ‘vulin 16. I didn’t learn anything I didn’t know before, but at least I’ve bought myself a bottle of this now, which is something any serious whisky drinker should have on their hypothetical bucket list.

Email ThisBlogThis!Share to TwitterShare to FacebookShare to Pinterest
Labels: lagavulin 16


The Family:
My whisky collection.