Popular Venetian souvenirs: glass, masks, pictures of canals.
Venice – the most romantic city in the world. People love Venice, and for good reason: it’s great. I took Brenda there in June last year, and we spent the whole time wandering around in search of culinary delights, gifts, romantic photo opportunities, and… grappa.
Yes, grappa that I was first introduced to in York’s Vom Fass (http://www.vomfassuk.com/) store. Wikipedia has some interesting and in depth information (http://en.wikipedia.org/wiki/Grappa), but the gist of it is that grappa is made by distilling all the stuff that’s left over (skins, pulp, seeds, stem) from pressing grapes for wine, and it differs from brandy in that brandy is made by direct fermentation of pure grape juice.
I didn’t know anything of that at the time, but I do believe it was during this trip that I had the idea of becoming a booze tourist. It was as simple as that; ‘they make grappa in Italy, don’t they? I could get some of that’.
Since the whole idea occurred on holiday, I didn’t get time to do any research into brands or anything. So when it came to deciding which one to get, Brenda just asked a guy in the sports store where I was buying a Venezia football shirt. He seemed quite knowledgeable. Interesting technique though – don’t ask an expert, just ask anyone.
My starting criteria was that I wanted something traditional, but good. Our guy recommended Storica, and directed us to a place around the corner where we could get it.
As things transpired, they didn’t have it in the store. They had an alternative, but it wasn’t a traditional style. I can’t remember what was different about it, but I decided to leave it for the time being.
For the next couple of days we walked all over Venice, and tried every shop we could find from your off-licence type stores, down to every tiny grocery store and even the tourist gift shops. They all sell grappa of some kind, though none of them had Storica.
I found it eventually, and had to choose between three varieties. The shopkeeper was no help, as each time I found a slightly different way of asking which was the most traditional, he countered by listing the three types by name. So I went for this one: 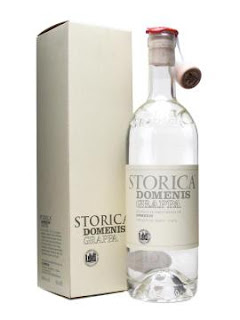 Also on that holiday we found a wine shop where they keep the wine in giant barrels, and pour it into empty water bottles for you. We paid about 3 euros for a litre and a half of it. It was good stuff, too. As we were leaving, some American tourists who had been watching from outside asked us what the situation was. Soon a queue was forming outside that little shop.
As for the Storica; it became a firm favourite. It’s fragrant and sweet, and the liquid seems far more viscous than any other liquor I’ve experienced before, and at 50% alcohol, it’s nice and strong. Sadly, my bottle is long gone, and only one friend got to try it. Next time I go to Italy I’ll struggle to decide whether to buy that one again, or try a new grappa. Most likely though, I’ll spend far too much money getting both.
If you’re planning a trip to Venice, keep an eye out for the discount wine shops, and definitely consider getting yourself some grappa. If you want to try it first you can get free samples of up to five varieties at Vom Fass. I have a small bottle of their grappa prosecco at the moment, which clocks in at only 40%, and is priced at £5.60 per 100ml. It’s not quite as nice as the Storica, but it’s still a special treat that I’ll be saving for more special occasions. As for the Storica, that’s available from The Whisky Exchange for £46.44 including delivery, and I also saw a bottle in the Didsbury branch of Carringtons for £42. I paid 32 euros so… I win.
One place we didn’t win was the “legendary” Harry’s Bar. Harry’s Bar is famous for inventing carpaccio and the Bellini cocktail, which is two parts sparkling wine and one part fresh peach puree. It is also famous because it was popular with Ernest Hemingway. It’s difficult to find and you can’t see out of the windows. I can’t speak for the food there, though I do know it’s very expensive. Some friends of ours went on their honeymoon, and spent £300 each (I think) on dinner. Brenda and I had to be a little more economical than that, but we’d been told we should go, so we just ordered a couple of Bellini’s. They didn’t even make them fresh – I saw the waiter pouring them out of a jug, readymade. And they were small. And they were 15 euros each. And they weren’t even that nice (that’s a matter of opinion, I suppose). I wouldn’t recommend it, anyway.
As ever, please feel free to leave a comment. If you’ve got any booze tourism recommendations or questions, I’d be glad to hear them. And don’t forget to look out for part 2 of this feature, which will focus on Spain.
Posted by Neil Cake at 02:41