Plans for the weekend : Special Brew 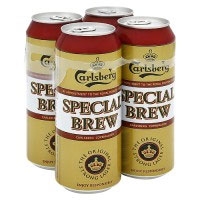 Last night, while watching Sean Lock’s Lockipaedia, in which he talks about being able to buy Special Brew in his local pretol station, my fiancée and I realised neither of us had ever tried Special Brew.
It isn’t liquor as such, but Special Brew does have a bit of a reputation for being a favourite among alcoholics (read: tramps), due to its alcohol content of 9%. In fact, while looking for booze porn to illustrate this post I came across the following link:
http://gk007a0336.pwp.blueyonder.co.uk/carls.htm
Yes, there appears to be a website dedicated to super strength lagers (though it seems to have died in 2008)… with an actual serious review. What caught my attention more though, was this – a link to a review of Lynx Altra:
http://gk007a0336.pwp.blueyonder.co.uk/lynx.htm
And suddenly I knew where this post was going. It was only supposed to be a brief description of what I might be doing this weekend.
Lynx Altra is probably the only super strength lager I’ve ever tried, and it takes me right back to my days as a student at Newcastle University. Not because I drank a lot of it – in fact I only ever had one 4 pack – but because it was probably the final link in a chain that leads me to recall a number of mad events.
The chain begins with my first year at Henderson Hall where as skint students (me more skint than any of the rest – I survived on £20 a week back then), we discovered Viborg lager (below is literally the best picture of it that I can find online). It was available just down the road, and I’m pretty sure you could get 8 cans for £2.50 (something daft like that). Like all lager, it was fine when it was cold, but when it was warm it tasted like vomit. And unfortunately, most of us didn’t have access to fridges, so what we’d do was fill our sinks with tap water and store the cans in there. It didn’t do much good though  – how is room temperature water supposed to keep cans at anything other than room temperature?

Despite its failings, every Friday evening (usually around or before 6) we’d all rock up at a friend’s room with a carrier bag of 8 cans of Viborg each (or however many were left in the bag at that point – each person probably had an open one in his other hand), and we’d drink all 8 before heading out to the Students’ Union.
Later, when we moved out of halls Viborg wasn’t available anywhere nearby, but luckily we found a suitable, and almost as inexpensive substitute - Lynx, which looked like this:

Again, this is the best photo I could find of it.
Lynx came in a number of varieties, but most accessible, and the one we favoured was this 5% version – 0.5% stronger than the Viborg.
I came to try the super strength Altra version one Halloween when a large group of us had spent the whole afternoon crawling the pubs in the Quayside area (as we often did), and had decided to go to a party. Needing to pick up beers on the way, we called into a newsagent where I spotted the Lynx Altra, and noticed it was an 8.5% take on the popular drink. I had to try it.
I can’t say I enjoyed the taste, but I did drink all 4 on top of the skin full I’d already had, and would go on to have a few more drinks. I seem to remember we all got thrown out of that party – in ones and twos, and a friend and I ended up in a nearby pub where the barmen were dressed as IRA terrorists with guns and balaclavas. Or they were robbing the place. They served us drinks anyway.
It was a great night. Thanks, super strength lager. So, with the spirit of 1998 in mind, I’ll be heading to the local Tesco after work to see about picking up some Special Brew. And if they don’t have it, perhaps the Best One will. Then I guess there’s always the petrol station.
I guess, to give you a bit of notice, next weekend is the Winter Ales Festival in Manchester (http://nwaf.org.uk/) where hundreds of people will go to get hammered, and a few will go to celebrate and promote real ale. I don’t think I’m going to be able to go this year unfortunately, but you never know.
Whatever you do this weekend, drink sensibly and especially don’t go around starting any fights, y’hear?
Posted by Neil Cake at 06:50