Booze: the more you drink it, the better it tastes - but why is liquor so fascinating?

Here you go; I was thinking for a while. What would be the best subject for my first actual post? I’ve found the answer: why is alcohol so fascinating? You know; why isn’t tasting all the different varieties of cola as stimulating as trying the different varieties of whisky? I like cola, but I LOVE whisky. It can’t all be down to the alcohol, can it?
I don’t believe I’ve ever tried alcohol-free beer; I don’t see the point. But why? I once remarked to a co-worker who said he didn’t drink beer because he didn’t like the taste when I was 21 or 22 that ‘if you don’t like beer, you haven’t drunk enough of it’. And that’s true. Because you don’t like it at first. Do you?
So what is it? Is it the alcohol content? With beer, yes; the buzz is important, I think. But what about whisky? Vodka? Rum? Brandy? I really like the flavour of those drinks – the subtle differences. Sure! I like the buzz as well, but I feel like I like the flavour so much that I’d maybe drink them if they were alcohol free!
But would I? I’d probably not get into them if there was no alcohol. Has anyone ever made an alcohol free whisky? I guess it wouldn’t be the same, would it? I read recently though, that alcohol is flavourless, so couldn’t you make a drink as subtly flavoured as a fine whisky without it being alcoholic?
Ok, well I’ve decided that the point of this blog isn’t to answer all these questions, but maybe just to make you think about them. So I’m not going to trawl the internet finding out whether alcohol is particularly prone to absorbing flavour from oak barrels, or… just whatever. I’m sure there are loads of possible factors. I suspect that part of the fascination with alcohol is chemical – our brains like the sensation, and encourage us to indulge, perhaps by convincing us that it tastes nice.
Anyway, I did do a quick internet search for alcohol free whisky, and this is what I came up with:
http://whiskey-store.co.uk/index.php?type=page&pageid=2&mid=3
Perhaps I’ll try it… um, one day…
Look at this, though: “Black ZERO non alcohol whisky tastes and looks exactly like traditional Scotch Whisky.” What does that mean? Scotch whiskies all taste different!
No reviews (at time of writing):
http://whiskey-store.co.uk/eshop/products.php?reviews&whiskey&osCsid=77203780892baf6c5ed2187a96e48112
Hmm… it turns out alcohol free whisky raises other issues [that I don’t want to get into]:
http://www.thedrinksbusiness.com/2011/11/row-over-alcohol-free-whisky-deepens/
Anyway. It's time for a picture - let's call it "Booze Porn". Here's the whiskies I have to choose from at the moment. 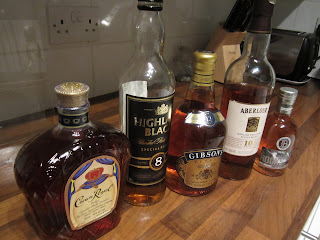