Happy Monday everyone, and a special hello to all the people in Russia – it seems I had 11 views from the home of vodka yesterday. This is pleasing, I hope you’ll come back soon and bring some friends. Seriously; I’m actually quite excited about that.

So I told you last week that my plan for the weekend was to try Carlsberg’s Special Brew. I got very excited about the prospect, and couldn’t wait to get to Tesco, but against all odds they didn’t have any. They did have Tennent’s Super though, and I came very close to buying that, but “no,” I told myself, “that wasn’t the point. It’s Special Brew or nothing”.

So I bought cheese for Friday night’s homemade pizza and orange juice in case Brenda wanted a Tequila Sunrise later on, then walked up to the Best One. They did have it, and it was in the fridge – six quid. That’s double what I pay for my normal lager – I’m partial to the Holsten Pils - but I suppose you can put the price discrepancy down to the alcohol content (9%).

I little while later, Brenda got home and she was almost as excited as I was. 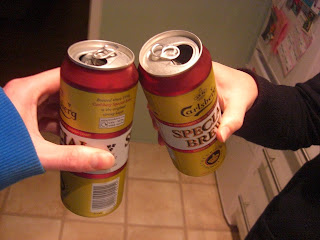 We drank them straight from the can because it seemed like the right thing to do – one each, therefore not following the instructions that I spotted when it was already too late:

The good news is that we had a lovely time, drinking in front of the telly, waiting for the pizza dough to rise. I felt quite pissed around halfway down my first can, and was starting to slur. And later we had an argument about nothing in particular.

Well, this blog isn’t about reviewing booze as much as it’s about enjoying and experiencing it. So don’t expect anything approaching a review here. If you haven’t had Special Brew before though, you probably would like a word or two on what it’s like, and let me tell you; considering it’s super strength lager, it doesn’t taste bad at all. It certainly gives you a buzz, and I think the can is quite classy looking, though I did feel a bit weird buying it – that’s the stigma of super strength lager, for you.

If you want a more in depth view, go look at the Tramp Juice website (http://gk007a0336.pwp.blueyonder.co.uk/), as I said on Friday, it seems to have died back in 2008. Whether that’s related to consumption of super strength lager, I wouldn’t like to say, but a lot of the information on there is still relevant.

As for Brenda and I, we enjoyed the Special Brew. I think it helped that I refrigerated the cans extensively before we drank them, but neither of us found the taste offensive, we had a good laugh, and we enjoyed the exploration, though we did both wake up at 3am on Saturday morning with heartburn. Would we drink it again? Well, I wouldn’t say we wouldn’t, but I think it’s unlikely that we will. There isn’t a super strength lager sized vacancy in my psychological drinks cabinet, so I guess it’s one for the niche market – people who want to drink lager, but still get pissed quick.

If you’ve got any super strength lager related stories, or if there’s anything you’d like to encourage me to try feel free to leave a comment. I’ll be back later in the week with a feature of some kind.