People can be quite snobbish. Especially people who like fine food and good liquor. You know, some people insist that having your steak well done is a travesty. Some tell you that you shouldn’t keep your chocolate in the fridge, and some tell you that you have to put the milk in last when you make a cup of tea. In this feature I’ll be discussing the abhorrent practice of booze snobbery, and encouraging you to drink it how you like it. And that goes for tea, too.
For this first instalment, I’m going to tackle the biggie; the ultimate conundrum: how should you drink scotch whisky? Do you need a specific type of glass? Should you add a little water? Should you be berated for drinking it over ice?
Now, I don’t want to offend anyone with this segment; I know there are a lot of people who know a lot more about this than I do, but the whole point of this blog is to encourage enjoyment of alcohol, not to tell you what you should or shouldn’t think, or what you should and shouldn’t drink. You’re right in the end (unless you’re drinking white spirit). So, if you feel particularly strongly about anything I say in this post, feel free to add a comment, but you know; be cool. It’s not about you, it’s about me. Just kidding: it’s about everyone. And after this one, maybe I can go on to discuss some more fun things, things that aren’t so divisive.
I just wanted to add that little disclaimer there because when I started this blog, I didn’t realise how deeply I would have to get into information, opinion and facts. I was just going to ramble on about stuff, tell you about experiences, make suggestions and comment on stuff. I realised though, that if I was going to ask a question, I was going to have to think about answering it. If I was going to talk about something, I was going to have to find out a little about it. You can’t say, “I don’t know why…” when all the information in the world is at your fingertips. You can’t say, “I don’t have any information about that” when it’s all right there. Because if you do say that, someone’s just going to click on that search button themselves, so why should anyone bother reading your blog?
Equally, I don’t want to come across as some kind of know-it-all. I don’t even want to know it all, and I don’t want anyone to think that my opinion is gospel. Yours is just as valid. And mostly, I just want to enjoy alcohol, and share a bit of that enjoyment. And I don’t want it to get serious. So let’s give it a go, shall we?
The whole need to address this issue arose when I tried to write a short piece about this: 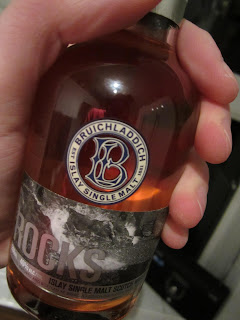 It’s Bruichladdich Rocks, a single malt whisky, weighing in at 46%. My future brother-in-law gave me a small bottle (20cl) for Christmas. Let me first say that I’ve been enjoying it enormously. I think it’s very tasty. I’m no expert, and I don’t want to become one of those people who go on about tasting vanilla and cloves and all that stuff, but I found the flavour fascinating; sweet, then sour, then a little smoky. If you want the official version, go here http://www.bruichladdich.com/shop/classic-single-malt-scotch-whisky/classic-bruichladdich/rocks.
I’d done a little research beforehand, and it was suggested that it had been created to be enjoyed with ice. I knew though, that single malt isn’t really supposed to be taken with ice, and having tasted it, I thought it was far too enjoyable and full-flavoured to risk watering it down, so that seemed at odds with the very little I knew and the even less I took seriously about drinking scotch – ice destroys the flavours, right? And why doesn’t the website say anything about ice? Why doesn’t it say so on the bottle?
Nevertheless, as I said in the introduction, I realised I had to look into it a little further if I was going to write about it. And I found this:
http://www.youtube.com/watch?v=JKYNYFhT3wY
in which Jim McEwan, Bruichladdich’s master distiller, confirms that it indeed was conceived to be enjoyed with ice (though in the video he adds water to it instead(?)), and goes on to give instruction on how whisky should be tasted, as well as asserting that young whiskies should be enjoyed early in the evening, while older ones should be enjoyed later...
He says that all professional tasters add water, and that you should let your own sense of taste decide how much to add – as well as that it depends on the age of the whisky, as different ages react on a different part of the tongue. The science is all very interesting, but he doesn’t say what effect you are trying to achieve – beyond the whisky ‘opening up’. I can see that I’m probably going to have to try it, if I’m going to investigate this properly, but I don’t really want to. I actually enjoy it neat.
Now, I can hardly argue with him though, can I? He clearly knows a thing or two, and he has made at least one very nice whisky (I’m guessing he’s made a few more, too). But a lot of his assertions for me signal the beginning of taking things too far. You don’t want to be thinking, ‘it’s past 10 o’ clock now, and this whisky’s far too young to be up this late’ or ‘my bottled spring water is foreign compared to the spring water that was used to make this whisky, so I don’t want to tarnish the experience by adding this to it…” do you? And I certainly don’t want to have a bottle of water to accompany each whisky in my family…
So I started looking at other websites that have addressed the question of how scotch should be drunk. Before I go on, let me just say that several address the issue, but they all disagree with each other to some degree. So let’s just look at what they say.
This website http://www.whisky-distilleries.info/ArtDeBoire_EN.shtml has a lot of useful information. It does point out that there is no rule, but it does go on to imply that if you follow its directions [they’re a bit like rules], you can enhance the experience of tasting whisky.
It mentions that there’s an ideal type of glass, and that you should never put ice in whisky [that sounds like a rule]. It also addresses the issue of adding water, saying that it causes a chemical reaction, and that the whisky will “open itself”. I’m just going to have to try that one, and see if I can figure out what it means.
This site http://www.maxriffner.com/parlor/know-how-to-drink-scotch provides very specific instructions on how to develop a liking for single malt scotch, by a progression of degrees. It does however, say that you can drink your single malt with a water chaser, but not mix them together. This disagrees with what I’ve heard previously from several sources, including the revered Jim McEwan. The author also favours the ‘on the rocks’ term for ‘with ice’, implying you’re a moron if you don’t use ‘on the rocks’, but that’s another matter for another time.
The Scotch Whisky Association (http://www.scotch-whisky.org.uk/swa/93.html) says this:

[how scotch whisky should be drunk]…  depends entirely on your individual taste and on the occasion. Scotch Whisky is a versatile drink. Served on its own, or with a little water, it can also be a refreshing drink with ice and a mixer. Scotch Whisky presents a whole range of flavours which can be extended by the addition of soda or mineral water, lemonade, ginger ale or other mixers. Scotch Whisky is also an excellent cocktail drink.

You’d think an organisation going by that name would know what it was talking about, wouldn’t you? It even presents some cocktail recipes, though I suspect they may be trying to promote sales of scotch whisky by appealing to all markets – something your purists are less concerned about.
This site http://scotchnoob.com/2011/03/09/water-ice-or-neat/ actually seems to me to have the most sensible approach, and conforms more tidily to the Drink it How You Like It philosophy, offering advice and encouragement based on personal experience, and for me – for now – that’s what it’s all about but, you know; it’s up to you. Make your own mind up, and don’t let anyone tell you different.
So, it’s Friday and this brings me to this weekend’s activities. I still have most of that bottle of Bruichladdich Rocks left, so tonight I’ll be trying it as its creator intended – early in the evening with some ice, or ‘with the rocks’ [that’s the right term, isn’t it?]. Tomorrow I might pick up some spring water and try it with water. I may also try my Aberlour with that; it could do with ‘opening up’ a little, I think. So I’ll be letting you know how all this turns out in due course – currently I drink things I’m particularly partial to neat, and anything less so ‘up the rocks’ or whatever that term is – with ice.
Also this weekend, I’ll be starting some research for a new feature on budget brands, by having Brenda do a blind taste test of Bailey’s Irish Cream and Aldi’s budget alternative, Ballycastle. So look out for the results of that; I expect to be putting them up on Monday. Later next  week, I should also be posting the first part of my Booze Tourism feature which, as I mentioned earlier in the week, will focus on Venice.
I’d like to finish here by encouraging you to visit and explore all the sites I used in the making of this post, but mostly I’d like to encourage you to enjoy your booze, and Drink it How You Like it.
Posted by Neil Cake at 07:11