I mentioned previously how my fiancée, Brenda bought me a bottle of Jura Superstition and a book about 101 Whiskies to try before I die for my birthday. Not everything she got me was booze related, but there was another thing – ice balls. You might have seen these before, or something like them. They are little plastic items, filled with liquid, that you stick in the freezer and use to chill your drinks – like ice, but they have the advantage of not melting, and therefore not watering down your drink. 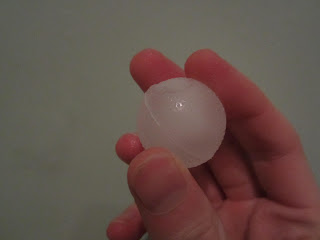 I don’t want to criticise Brenda’s gifts – it was certainly very thoughtful of her - but that’s pretty much the only advantage. I tested them out last night with a glass of Cointreau, and found one or two disadvantages. First, there were only six in the pack – you can stick as much ice in the freezer as you like – so with the ice balls you can only have two to three drinks before you’re back on ice.
Second, they don’t chill your drink as much as ice does, so you certainly wouldn’t be able to use them for making cocktails, and you lose the benefit of having an ice cold drink.
Finally, you have to wash them before you refreeze them. 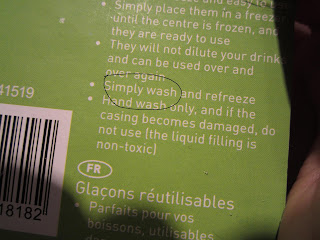 Simply wash? You never have to wash ice, do you?
Well, they’ve thought of something for everything haven’t they? You like your drink cold, but you don’t want it watered down – ice balls. Possible alternative: stick your drink in the fridge?
I think Brenda got the idea when I complained that the ice was watering my single malt scotch down. Since then I’ve just learned to drink it neat – if it’s nice enough, you can. So I don’t really need the ice balls. If your whisky isn’t nice enough, then you probably don’t mind the ice watering it down a bit, so ice still wins for me.
Nevertheless, it was fun to try [I'm easily amused], and it was a good excuse to try Cointreau on its own, which I’ve never done before. I never realised it was a clear liquid – it comes in a dark orange bottle (or something), so I assumed it was orange coloured. Well, I never did! 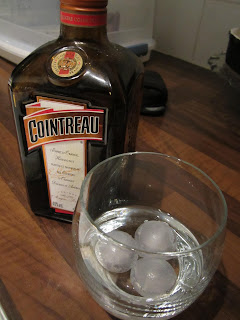 So! It’s the weekend again, and this one promises to be another quiet one. Brenda and I have been on austerity measures since our return from Canada at the start of the month, so it’s been weeks of staying in. Brenda’s been studying, and I’ve been taking advantage of that by playing on the Xbox a lot. My budget has only stretched as far as 4 cans of beer on a Friday and a game of 5 a side on Monday.
It’s pay day soon though, and we have bigger plans for next week which I’ll tell you about then. For now, I have one or two booze related experiments in mind, but I can’t tell you about them just yet. Brenda has put in a request to try BabyCham tonight. Neither of us have had it before, but I remember seeing it advertised on telly in the 80s, so I’ll be making another trip to Levenshulme’s Tesco after work to see if they have any in.
Have a great weekend, everyone. And enjoy yer booze.